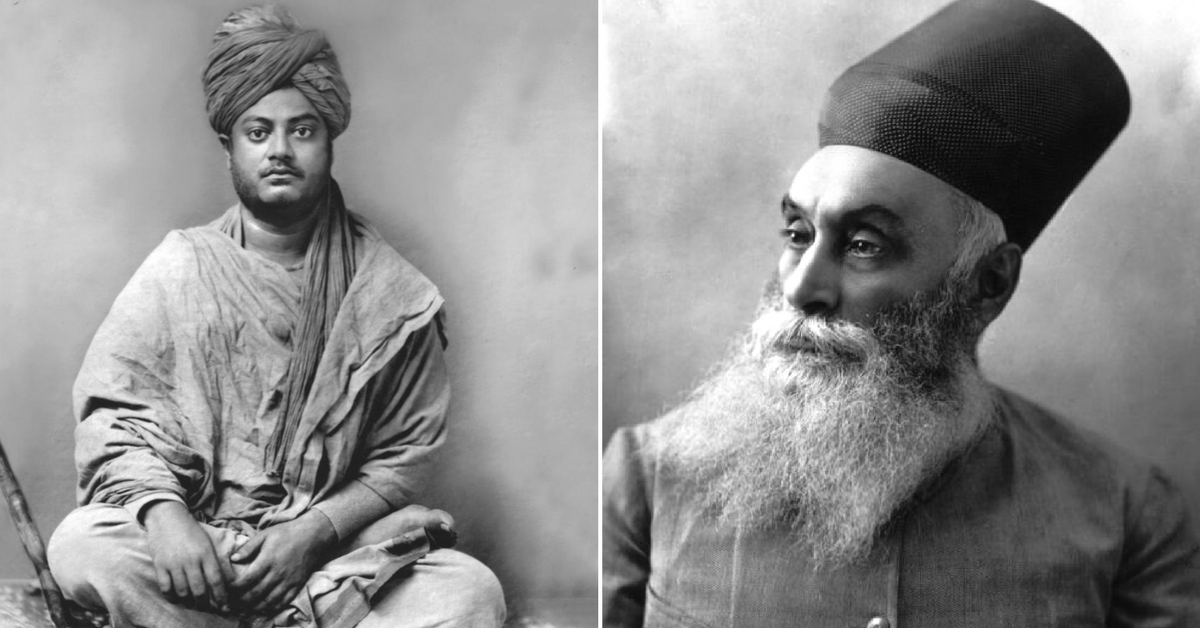 Here’s the fascinating story of an encounter between Swami Vivekananda and Jamsetji Tata that marks a little-known yet crucial moment in the history of India.

“Rooted in the past, full of pride in India’s prestige, Vivekananda was yet modern in his approach to life’s problems, and was a kind of bridge between the past of India and her present.” – Jawaharlal Nehru

The year was 1893. On May 31, aboard a steamer that sailed from Yokohama to Vancouver, two great Indians met for the first time. One was an industrialist who would go on to become one of India’s greatest visionaries, Jamsetji Tata. The other was a monk who would take India’s spiritual tradition to the West more effectively than ever before, Swami Vivekananda.

Here’s the fascinating story of the encounter that marks a little-known, yet crucial, moment in the history of India.

In 1893, Jamsetji was on his way to an industrial exposition in Chicago. A frequent visitor to Japan (there’s an interesting story behind this, read it here), he was staying at the same hotel into which Vivekananda would check in a few days later.

Soon after, on a sunny afternoon in May, the illustrious duo embarked on a voyage from the Japanese port of Yokohama to the Canadian port of Vancouver aboard SS Empress of India, a 16,992 ton luxury steamship belonging to the Canadian Pacific Steamship Company

While the two had met earlier, Jamsteji and Vivekananda had not had the time to engage in lengthy conversations. They did now and when they met again on the promenade of the ship, they got talking.

Vivekananda narrated to Jamsetji the experiences he had gained during his travels throughout the length and breadth of India as a wandering monk in the quest of truth. He talked about the relentless oppression and repression of his fellow Indians he had seen at the hands of colonial authorities.

Furthermore, he spoke about how, during his visit to in Canton (Guangzhou) in China, he had come across many Sanskrit and Bengali manuscripts in Buddhist monasteries.

He also explained that taking his faith to the West and calling for unity between the world’s major religions was the mission of his visit to the World Parliament of Religions.

Considered to be the first global interfaith event in modern history, the World parliament of Religions was a gathering of more than 5,000 religious officials, scholars, and historians representing the major world faiths.

It was held between September 11 to 27, 1893, as part of the World’s Columbian Exposition in Chicago.

They also discussed Japan’s phenomenal progress in technology and Jamsetji’s plan of laying the foundations of the steel industry to India. The founder of one of India’s largest conglomerates, Jamsetji also explained that he was in search of equipment and technology that would help make India a strong industrial nation.

Vivekananda endorsed the vision with enthusiasm, adding that the real hope of India lay in the prosperity and progress of its ordinary millions. He also added that instead of importing matches from Japan, Jamsetji should manufacture them in India and help provide a livelihood to the rural poor.

Impressed by Vivekananda’s views on science and deep-rooted patriotism, Jamsetji requested his guidance in his campaign in establishing a research Institute in India. The visionary monk smiled, gave his blessings and remarked,

“How wonderful it would be if we could combine the scientific and technological achievements of the West with the asceticism and humanism of India!”

Jamsetji and Vivekananda never met after that journey. But these words struck a chord in the industrialist’s heart and five years later, he wrote a letter to Vivekananda. Here is what it said:

I trust, you remember me as a fellow- traveller on your voyage from Japan to Chicago. I very much recall at this moment your views on the growth of the ascetic spirit in India, and the duty, not of destroying, but of diverting it into useful channels.

I recall these ideas in connection with my scheme of Research Institute of Science for India, of which you have doubtless heard or read. It seems to me that no better use can be made of the ascetic spirit than the establishment of monasteries or residential halls for men dominated by this spirit, where they should live with ordinary decency and devote their lives to the cultivation of sciences –natural and humanistic.

I am of opinion that if such a crusade in favour of an asceticism of this kind were undertaken by a competent leader, it would greatly help asceticism, science, and the good name of our common country; and I know not who would make a more fitting general of such a campaign than Vivekananda.

Do you think you would care to apply yourself to the mission of galvanizing into life our ancient traditions in this respect? Perhaps, you had better begin with a fiery pamphlet rousing our people in this matter. I would cheerfully defray all the expenses of publication.”

With kind regards,
I am, dear Swami,
Yours faithfully,
Jamsetji Tata

Busy setting up the Ramakrishna Mission, Vivekananda was unable accept the offer but he promptly sent his disciple, Sister Nivedita to meet met Jamsetji. Working together, they formulated a detailed plan for the research institute.

But it was promptly suppressed by the then-Viceroy, Lord Curzon.

However Jamsetji persevered and continued to work on these plans, convinced that the future progress of the country depended crucially on research in science and envisaged an institution that would encourage the same.

In 1898, he was on the lookout for a suitable place for such an institution when he met and discussed his idea with Sheshadri Iyer, the Diwan of Mysore. The two of them convinced the then-ruler of Mysore, Krishnaraja Wodeyar IV, to donate roughly 372 acres of free land in the heart of Bangalore and provide other necessary facilities.

Interestingly, Jamsetji’s words also seem to have had an impact on Vivekananda. The book, ‘The Complete Works of Swami Vivekananda‘, includes the following report from the Salem Evening News of August 29, 1893.

“According to Swami Veve Kyonda (Vivekananda), the need of the people of India is not more religion, or a better one, but as he expresses it, ‘practicality’. It is with the hope of interesting the American people in this great need of the suffering, starving millions that he has come to this country.

He said that missionaries had fine theories there and started with good ideas but had done nothing for the industrial condition of the people. He said, instead of sending missionaries, it would be better if Americans send someone who could give industrial education.”

Today, it is the pride of Indian and one of the premier research institutions in the world.

Also Read: The Story of Jamsetji Tata’s Forgotten Farm and How It Revived the Mysore Silk Industry