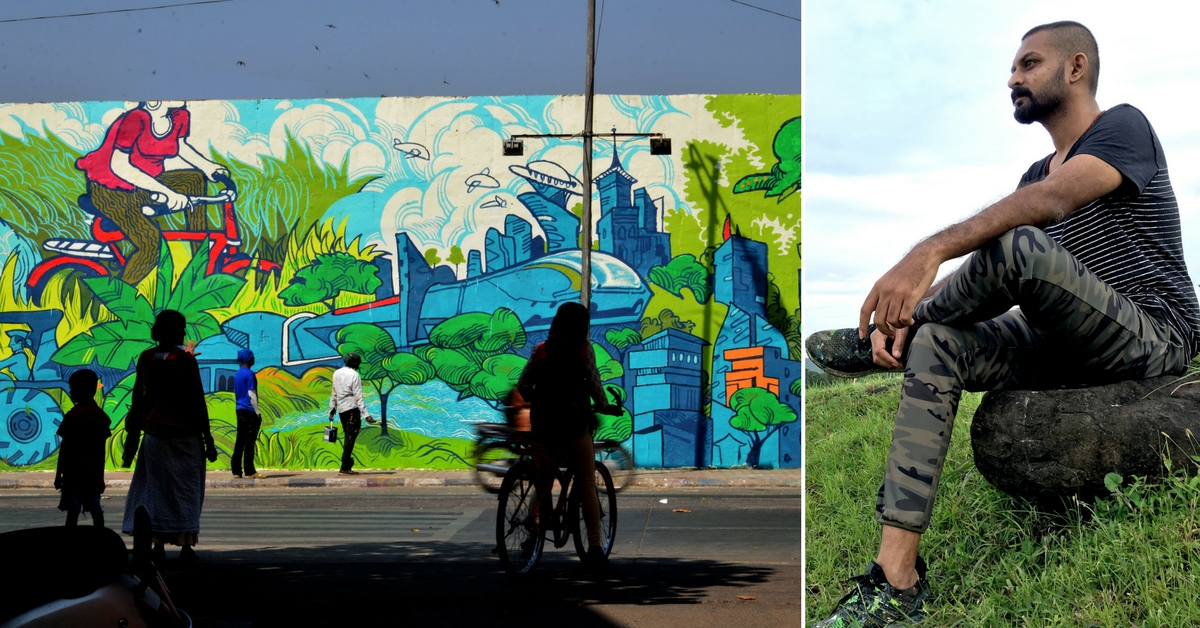 Harshvardhan Kadam’s foray into the field began with graphic novels and has essayed the role of an art director for various animation and gaming projects before turning to streets.

Unlike works of art which remain within the four-walled boundaries of museums and art institutes, and find appreciation only among a niche audience, streets have always been the modest pedestal chosen by artists to reach out to the masses.

And what could be a more befitting platform, when an artwork has a socially relevant message to convey—one that could catalyse a thought process or even better, pave the way for change in the society.

This was precisely what Harshvardhan Kadam was thinking about when he made the switch from graphic novels to the unassuming medium of street art almost a decade ago.

Harsh is a multidisciplinary visual artist from Pune, and an alumnus of Industrial Design Centre (IDC), IIT Bombay where he studied Applied Art and Visual Communication. Harsh’s foray into the field began with graphic novels, of which the first one was published in the US and had received international acclaim and several accolades in 2007. Besides, he has also essayed the role of an art director for various animation and gaming projects.

Until then, his artworks took shape with the four walls of his studio. Somewhere along the way, he felt that as much as his work was finding recognition, its reach was limited to a select audience.

“That is when the idea of storytelling as a long-lasting dialogue between an image and its surroundings found a pedestal. Leaving behind the comfort zone of working from a studio, I began travelling across the country and ventured out to public spaces to explore further,” says Harsh to The Better India.

In 2012, he organised a gathering in Pune that brought together artists from across the country to bring colours and meaning to the otherwise drab public spaces in the city, and this collaboration went on to become the Pune Street Art project.

Close to 40 dazzling murals have found its way into the public spaces across the country since then.

“Every mural work that we have done is a reflection of the space and its people. We interact with the folks and take their stories into account to develop our narrative. To begin a dialogue amidst the people, the canvas should project something that every bystander can relate to,” he says.

Most of his works are hugely inspired by Indian mythology and spiritual sciences—two subjects that he has been fascinated with since childhood.

The penchant for art and storytelling in Harsh goes all the way back to his parents, who were the first-generation comic bookmakers in the country. Harsh’s brother, Rajvardhan, also has an artistic streak, and the two run Inkbrushnme, a multi-disciplinary studio. One can quite literally say that the creative trait runs in the family.

In the beginning of this year, Harsh charted history by creating the largest and longest mural work in the country. Titled ‘Songs of the City’, the mural, stretching across the walls of the historic Yerwada jail, unfolds a story that leads one through a progressive narrative while lending a retrospective insight about the evolution of Pune, as it has come to be.

A work that was commissioned by Pune Municipal Corporation (PMC) and the Pune Biennale Foundation (PBF), Songs of the City was a cumulative effort of Harsh and his small yet seasoned crew of 5 artists who finished the mural in about 40 days.

“It had been one of the most adventurous and extreme projects that we had undertaken. Battling the unbearable heat, at least one person in the team was always down. But having an exceptionally talented and like-minded crew on board, we did manage to accomplish the project successfully,” he remembers.

Interestingly, the mural showcases the evolution of Pune, through the eyes of rivers Mula and Mutha.

“This story is my understanding, observations and future vision I hold for my city where I’ve spent most of my years. It is a collection of the personal, intimate yet unobserved moments that fleet away everyday, lost and never to be found again. This is not a linear representation of history, but a metaphysical depiction of stories,” Harsh says.

You may also like: Bringing Legends Back Alive on Walls: How Kohima Is Being Transformed Through Art

One has to visit the premises to behold the magnanimous mural stretching over 320x7m. Laced with metaphors throughout, one can find episodes from the history of the city that have been iconographically laid out.

“Even the mural undergoes a lot of transformation. As civilisations evolve, so does the level of articulation. Stylistically, these metaphors have been maintained. A hint of the violence that was the 1961 floods of Pune has been added, controlled to maintain the rhythm that is consistent throughout the vast stretch,” he explains.

Besides musing about the annals of history, the mural, more importantly, sheds light on the looming demise that is awaiting every overtly polluted river in the country, once the apex of every flourishing civilisation.

“This mural narrates the story of the evolution of Pune as a civilisation that I exist in. I am part of the city as she in part of me. This lyrical expression explores a dual directional narrative. One in which the story reveals itself as a progressive timeline and the latter is a retrospective perspective. That makes this mural unique and boundless for interpretations,” he elaborates.

Harsh intends to carry forward similar projects across the country. He believes that in a world that is governed by visual media, street art has boundless potential to catalyse change.

You may also like: How 30 Artists Breathed New Life Into Mumbai’s 142-Year-Old Sassoon Docks!

“But we require various state governments and civic authorities to promote such initiatives dedicatedly. Much of our cities have become concrete jungles owing to various infrastructure and development projects. Our culture is one replete with vivid hues and shades that if channelled in a contemporary manner, we could bring colour and vibrancy to such public places,” Harsh adds.

Amidst various upcoming projects, which include an illustrated novel on the story of Kamasutra, Harsh also guides those who are interested in mural art.

To know more, you can check out the Inkbrushnme website. You can also reach out to Harshvardhan Kadam at info@inkbrushnme.com.