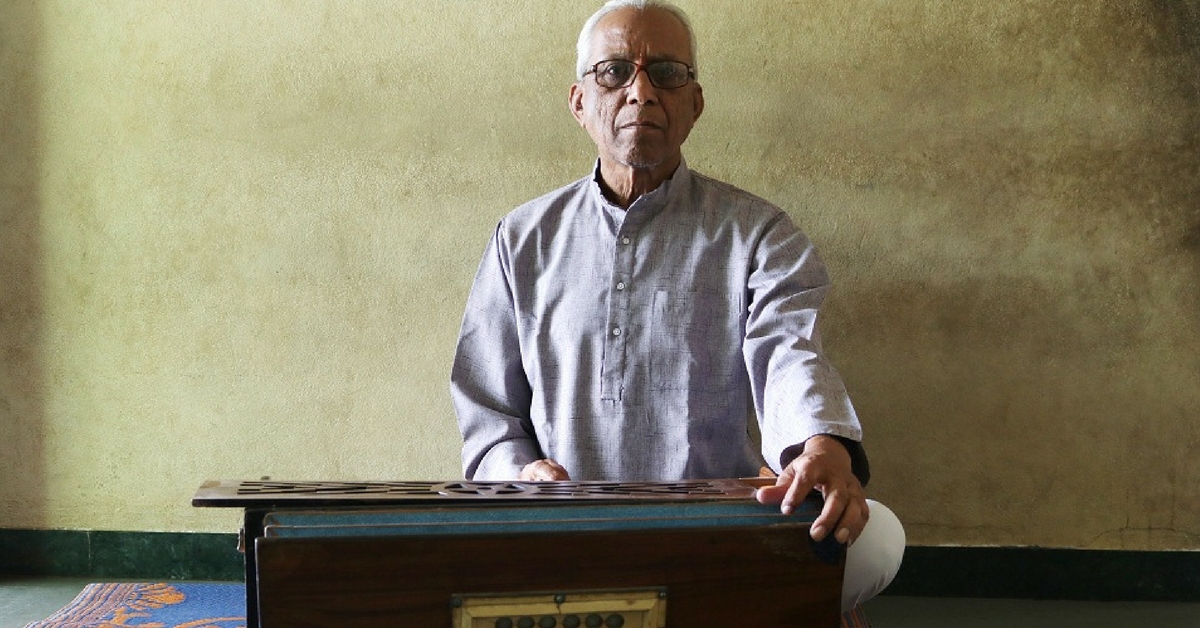 A former banker, Tukaram managed to balance work and music, and has performed with several renowned artistes.

“During the day I worked as a banker, only to keep my passion for playing the harmonium alive,” says 71-year-old Tukaram Bugad, a passionate harmonium player and a former banker.

Tukaram grew up listening to devotional music—his family used to host weekly bhajan sessions—and started to learn music at the age of 12. Even though he understood that finding a job was of paramount importance, the reality did not deter him from his journey.

Tukaram completed his an undergraduate degree in commerce (B.Com) and started to work as a typist in the People’s Co-operative Bank in Ichalkaranji town of Kolhapur district in 1969. “Back then there were no fixed criteria for such jobs at the bank. They would hire any graduate,” he says.

However, Tukaram knew that had to make his ends meet because surviving as an artist wasn’t a feasible option.

He would work from 10 a.m. to 6 p.m. and use the rest of his time for his practice sessions. After returning from work, he would practise the harmonium for at least six hours, and go on till late in the night. This became a daily exercise, but he refused to stop practising and received ample support from his family. In his 40 years of service at the bank, he stuck to this routine and despite the heavy workload and continuous training sessions. While working at the bank, he also went on to complete his diploma in Commerce and Auditing which took him about two years.

In 1965, Pandit Dattatray Vishnu Kanebua, a renowned classical musician came to Ichalkaranji where he watched a performance of Tukaram playing the harmonium. He decided to train Tukaram and taught him for 12 years. Tukaram credits Kanebua for his transformation from an amateur musician to an expert in the art form.

He truly believes that their meeting was not a coincidence; it was a product of the hard work and the hours he had put in the art form.

Entering the world of music wasn’t an easy task for Tukaram. The harmonium was banned from 1940 to 1971 by All India Radio (AIR) as it was considered un-Indian. Tukaram says, “There was no scope for harmonium during those times. People preferred the sarangi because of the false notion that the harmonium lacks melody. Time changes so fast. Today, nobody sings without the harmonium,” he adds. Tukaram started performing at AIR, Sangli district and continues to do so till date.

Also Read: With Degrees in Law and Engineering, This Pune Couple Is Making Classical Music Fun for Kids

Back in the 1980s, he was paid ₹25 for a performance that lasted 2-3 hours. “My masters always used to tell me that not every artist earns enough money for his survival, and you have to face that reality,” says Tukaram. Coming to terms with this reality wasn’t an easy option for Tukaram, but he fought back by training himself in the art-form and also keeping the family financially stable.

Tukaram has performed with renowned Thumri vocalist Pandit Vasantrao Deshpande, Gajananbua Joshi, Yashwantbua Joshi, Kishori Amankar, Ashwini Bhide, and Arti Ankalkar. At times, when the performance timings would clash with his working hours, he would take a leave of absence and carry on with the performance.

Tukaram has performed in many cities including Pune, Mumbai, Goa, and Kolhapur. People began to address him as Anna, and he is popularly known by the name Anna Bugad today.

About the author: Sanket Jain is a rural reporter, PARI volunteer and Founder of Bastiyon Ka Paigam. He is passionate about listening and understanding the everyday lives of everyday people. He is often found in rural areas covering stories of abject poverty.
Promotion