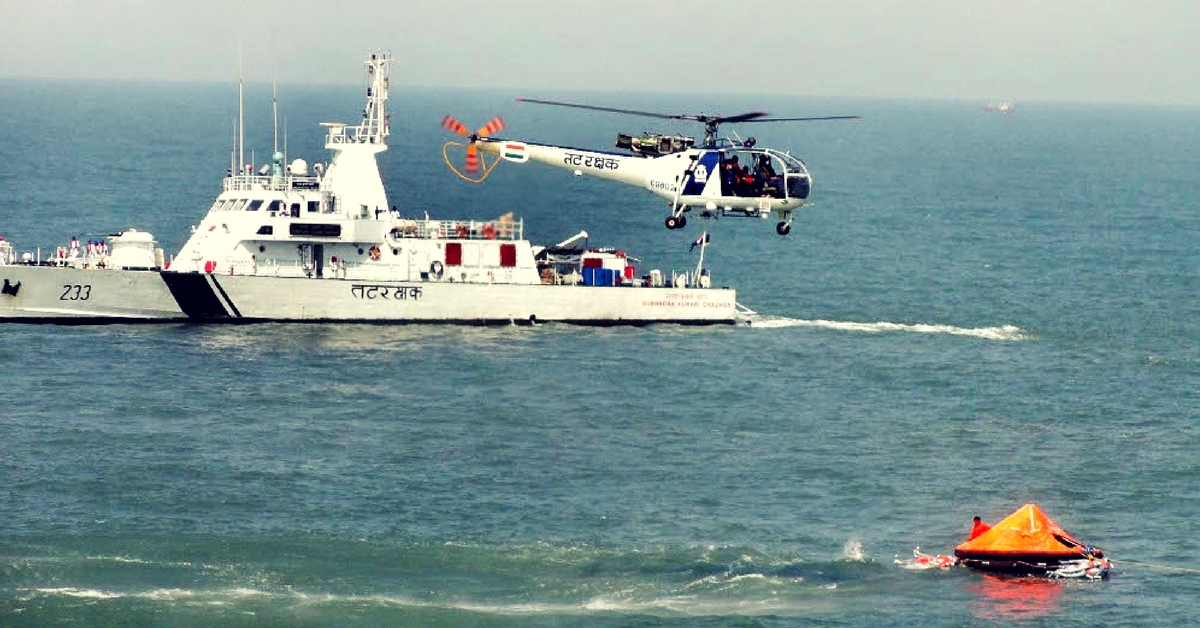 While the Cyclone named ‘Ockhi’ meaning ‘eye’ in Bengali may have brought out several brave rescue stories in the last few days, the fact that till date there is no set mechanism to track fishermen stranded in the sea is what needs to be addressed.

If you speak to the fishing communities in the coastal regions of Sri Lanka, Tamil Nadu & Kerala who lost not only their homes, but also their breadwinners, they would tell you how they have never seen the sea seething with anger in a long time.

Declared one of the most intense cyclonic storms to traverse the Arabian Sea since Cyclone Megh in 2015, tropical cyclone Ockhi is the third and strongest storm of the 2017 North Indian Ocean cyclone season.

Originating from Sri Lanka on November 29, it gained momentum and strength by December 1 and brutally damaged property and threatened lives along the coasts of Kerala and Tamil Nadu.

The intensity of the storm is apparent in the rising death tolls that have crossed over 25, with over 96 fishermen missing in Kerala alone.

Defence minister Nirmala Sitharaman said that over 357 fishermen, including 71 from Tamil Nadu, stranded in the sea due to the cyclone were rescued by the Coast Guard. And yet the wait of some families to see their loved ones who left for the sea to not return back, hasn’t ended yet.

While the Cyclone named ‘Ockhi’ meaning ‘eye’ in Bengali may have brought out several brave rescue stories in the last few days, the fact that till date there is no set mechanism to track fishermen stranded in the sea is what needs to be addressed.

The lack of any precautionary or preventive measures fishermen at the sea could take to seek help or provide locational information to facilitate tracking during high alerts and emergencies like cyclone Ockhi need to be taken up on priority.

In an interview with Julie Mariappan for the Times of India, Taml Nadu fisheries minister D Jayakumar expressed that till date information about fishermen is manually collected from 44 fishing villages of Kanyakumari.

While the migration of fishermen to other states is being referred to as a major problem in recording data, the government is yet to work out a solid proof plan to protect fishermen at the sea with stricter rules.

Currently the only way of tracking the fishermen at least in Tamil Nadu are the tokens distributed for diesel and kerosene subsidy to boats registered with the state government under the Marine Fishing Regulation Act. This number is tracked by the 31 diesel outlets in fishing harbours and fish landing centres along the Tamil Nadu coast. This could be replaced with a census for fishing communities year on year or at least once in a few years to track the number of fishermen and boats venturing into the sea.

All fishermen therefore have to be educated about the importance of registering with the government. They has to be a mechanism in place whereby fishermen can intimate authorities before venturing into the sea.

While the state introduced a scheme of supplying distress alert transmitter, a satellite-based distress transmission device with 90% subsidy assistance for mechanised fishing boats and motorised country crafts, it is important to note that only 10% of vessels in Tamil Nadu are equipped with them.

These distress alert transmitters need to be made mandatory. One way to help fishermen across the states adopt it, is scaling down the costs further and educating them about its working while venturing into the sea.

The fisheries minister also expressed that while it is simpler to track fishermen on foreign shores through passport and visa, many of the fisherfolks who migrate to neighbouring states cannot be traced as they are not bound by any rules to register or intimate the government before making the switch.

More and more fishermen can be encouraged to adopt the ‘Fisher Friend’ mobile application which not only provides information about weather and ocean conditions, potential fishing zones (PFZs), disaster alerts and current market prices of fish to the fishermen but also warns them if they are crossing the international boundary line in the sea.

This location-specific app needs to be made accessible and user friendly by adopting it in all local languages of the respective states. for those venturing to deep-sea fishing.

This app developed by the MS Swaminathan Research Foundation (MSSRF), in association with Qualcomm and Indian National Centre for Ocean Information Services (INCOIS), in its pilot project in 2014 benefitted over 5,000 fishermen in Tamil Nadu and Andhra Pradesh reported The Hindu.

The app is also equipped with a feature that alerts the Coast Guard crew in case of emergencies,. Idf scaled up and replicated for different states, it could help subvert dangers.

All fishermen could be supplied wireless communication devices. The Tamil Nadu government is looking at setting up VHF and BSNL towers to facilitate this communication.

“Control rooms are also being constructed and for procurement of VHF sets, tenders have been finalised for 19,000 crafts and 5,000 large vessels, which come at subsidised rates,” D Jayakumar told TOI.

As India goes digital the mechanism of fishermen to register with the state government could also be online, to avoid the tedious and time consuming offline procedures.

If you have any suggestions that state governments could incorporate for better precautionary measures write to us.