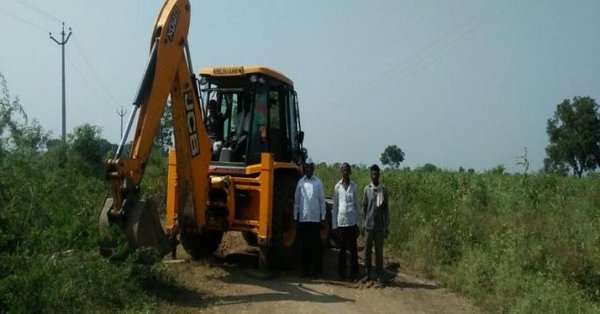 The state constructed road had been in shambles for a very long time. No number of letters or complaints encouraged officials to fix the mess.

What do you do when you have roads in ruins that result in bad access to essential amenities? If you take inspiration from villagers in Chalisgaon, you can just construct a road all by yourself!

The villages of Umbarkhed and Dadapimpri in Jalgaon district of Maharashtra are neighbours. However, villagers could not travel to the adjoining village, due to very bad connectivity between the two.

The state constructed road had been in shambles for a very long time. No number of letters or complaints encouraged officials to fix the mess.

This was when the villagers decided to take matters into their own hands.

Umbarkhed houses medical clinics, a high school, college and bank branches. The village of Dadapimpri, a home to 8000 people, is devoid of these amenities. Naturally, it is evident how frequently the residents of Dadapimpri would have to travel to Umbarkhed.

Students would have to walk on the nearly impassable road every day. Medical emergencies in Dadapimpri would prompt plenty of efforts from the villagers due to this. Even depositing money would be no easy task for the villagers.

Something as basic as farmers reaching farms with their equipment would become a task for the villagers.

The recent sugarcane crop could neither be transported to sugar factories by villagers nor were the factory authorities ready to supply transport, much to the farmers’ distress.

The wait for government officials to carry out their duties was too long, and in any case, there was no positive reply from the officials either.

But all these efforts would see an end when the villagers decided to take matters into their own hands.

Farmer Vijay Thanisingh led others to collect funds. The collected money was then invested in renting a JCB and constructing a 3-km road that connects both the villages.

And though this is not the best solution, sometimes, helping yourself is the most practical solution.
This is not the first time that citizens have had to shoulder the government’s responsibilities. Last year, villagers from Dima Hasao district in Assam had built a 6-km road when the government officials neglected their pleas.

Villagers from the Hazaribagh district of Jharkhand have also constructed a road to a neighbouring village to ensure better connectivity to basic amenities. Nilathar villagers, earlier this year, built a 100-metre road over the Ong river to avoid isolation during monsoons.