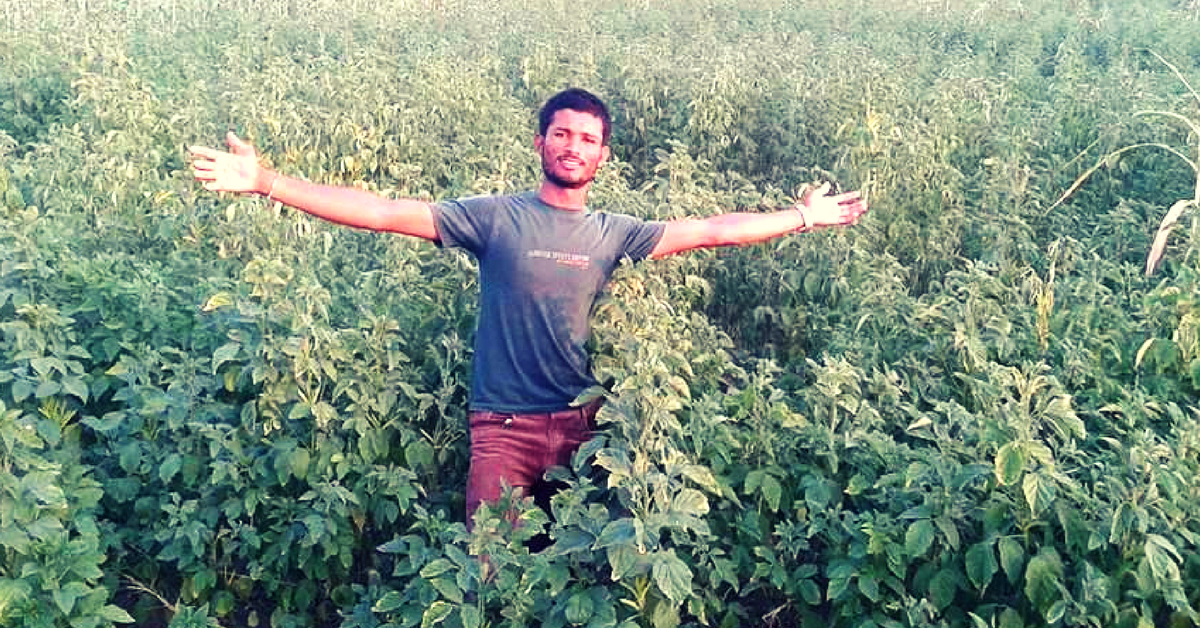 According to him a formal degree in agriculture only gives knowledge about the positive effects of chemicals in farming, completely skipping the negatives.

It was in 2012 when Pawan Tak visited a hospital in Ajmer and came across a girl who had tried to commit suicide by drinking a harmful pesticide. This incident changed his entire course of life!

“The family belonged to a remote village. The doctor wanted to know the name of the chemical that the girl had consumed so that they could start the treatment. I coordinated with the doctor and her parents and gave him the information. The girl had consumed two capfuls of a pesticide used by most farmers and was in a critical situation. I kept thinking about what happens to those who consume vegetables and fruits that are grown by using tonnes of this poison,” says Pawan.

Pawan grew up in Fadako Ki Dhani of Ransigaon, a small village near Jodhpur in Rajasthan.

His father was a government employee but would spend all his free time, working on the farm.

“My father was very passionate about farming. He would wake up at 4:00 a.m., work on the farm till 7 a.m., go to work and after returning from office, would head to the farm until dinner time. I think my passion for farming is in my DNA somehow,” he says.

However, Pawan was never encouraged to take up farming. To find a midway between his passion and his father’s wish, Pawan opted to complete a bachelor’s degree in agriculture and decided to take up a job after that. However, when he saw a girl dying of pesticide and thought about the ill-effects of it on everyone who eats chemically grown vegetables, he felt a responsibility to put an end to this.
He began to research the ill effects of chemicals in agriculture. According to him a formal degree in agriculture only gives knowledge about the positive effects of chemicals in farming, completely skipping the negatives. He searched for the ancient methods of farming when chemicals did not exist, and would also meet organic farmers who had entirely given up chemicals.

In 2015, after completing his degree, Pawan was placed in a renowned company that sells fertilisers. However, he was aware of the dark reality behind the huge fertilizer market, Pawan left his well-paying job within 45 days of joining the company. “There is a constant pressure on agents to sell maximum chemicals. The greed of some extra incentives leads these agents to sell more than the required amount of chemicals to the poor and illiterate farmers,” he explains.

After leaving his job, Pawan continued his research and decided to acquire a post-graduate degree in horticulture. He also started to experiment with organic methods on his farm. Even though financial constraints were making life difficult, he had decided to work only the organic way.

As fate would have it, Pawan was soon offered a job in the International Horticulture Innovation and Training Centre (IHITC) as a trainer. The first village that Pawan had to train was Jhalawar and then Dungarpur. The task given to him was to make the village fully organic. Literature, posters, and pamphlets were distributed to promote the use of organic farming in the district. Farmers were made aware of the modern techniques and the schemes of the government. Seminars and workshops were conducted, and the farmers were trained to use organic cultivation techniques. The farmers and supervisors were also called to IHITC to gain a practical experience about this method and how the government schemes might benefit them.

“The work is still going on. It’s just the beginning. There’s lot more to do,” says Pawan while speaking to TBI.

Within a year Pawan was promoted as a chief trainer and was also given the responsibility of Jhalawar district. The farmers in this area were unaware of how to harvest Mandarin, but after they were trained in harvest and post-harvest techniques, they were able to increase their revenue and produce. This project helped the farmers to upgrade their skills and eventually led to the improvement of Mandarin production in Rajasthan.

The unique feature of this training was the ‘Dampatti Krushak Model’ in which the camps invited couples to take part in the training programme, together. “Even though wives work alongside their husbands on the farms, they are not considered as farmers and are not invited to training programmes. This was the first time when couples were invited, and we were happy to see that many female farmers participated enthusiastically in the programme,” Pawan informed TBI.

Pawan has studied almost 22 to 25 crops and discovered that the simplest way of making manure using the available resources in the farm. He believes that the only way to help farmers come out of their distress is making them self-dependent. Their dependence on the market for seeds, fertilizers and pesticides is the reason behind their downfall.

“Chemicals ruin everything. The pH balance of the soil gets affected, microorganisms that help in making the earth fertile are killed, and if you look at the hands and feet of a farmer who uses chemicals, you will see how damaged they are. Farmers also use chemicals to take their lives, and their bodies get decayed within hours. Just imagine how harmful it is for us,” he explains.

Pawan who has trained over 4000 farmers has also written a book ‘Jaivik Kheti Ki Samagra Awdharna’ to spread awareness about organic farming. This young agri-scientist does not just stick to his job duties but also keeps inspiring others by his innovative ideas. He wants to continue this journey and make sure that our environment is saved in every way.

“Human beings are God’s best creation and it is our responsibility to protect and take care of every other being that God has created to make our lives better. Through your article I want to request everyone to ensure that they protect the environment and every living being in every way possible,” says Pawan.