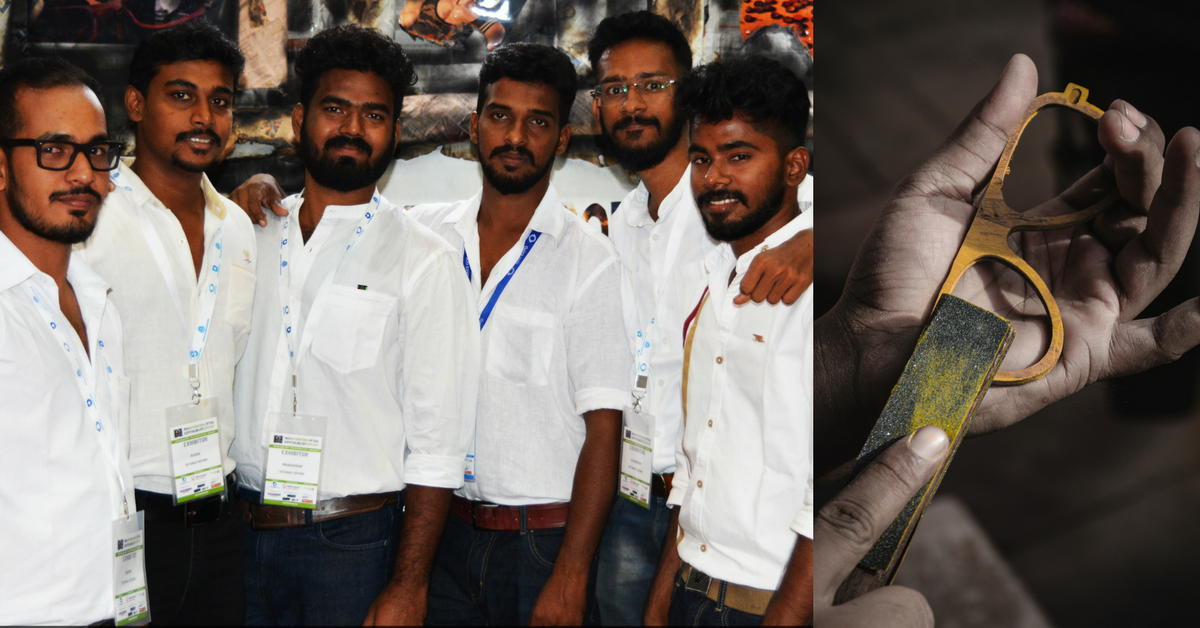 “People who contacted us had so many queries. They wanted to know if the frames would be light, or even water resistant.”

India has emerged as the world’s third largest start-up base, and it is predicted that by 2020 there will be almost 10,500 start-ups across various sectors. This growth is despite a perception that the start-up ecosystem in the country has slowed down in the last year or so.

To understand how the idea of making these wooden frames came about, we at The Better India caught up with Jayakumar.

Jayakumar is an engineer, and was working for Wipro when he hit upon the idea of becoming an entrepreneur.

“I have always been interested in working with wood, but I took it up seriously once I realised that there is a market for biodegradable spectacle frames in India,” he says.

While working with Wipro, Jayakumar started his R&D for the wooden frames and decided to take the plunge in April 2016. An interesting fact to be noted is that TeteWood is the only company in India that manufacturers and customises wooden frames. Most of the wooden frames you see in the markets are exported from China.

TeteWood has a presence in Bengaluru and a manufacturing unit in Karaikudi, Tamil Nadu. The company started its initial operations with an initial investment of ₹ 5 lakh, which came from Jayakumar’s friend. Today, TeteWood employs 10 people and has an online store.

When asked about his family and growing up years, he said, “As a family we have faced many financial difficulties and constraints. My mother has worked very hard all her life to provide for the family. Unfortunately, my father passed away just a month after we launched the online store and was unable to see it do well.”

Jayakumar was bitten by the entrepreneurship bug early in life.

“In the third year of college, a few friends and I started selling customised T-shirts and hoodies for students. We also managed to make a marginal profit in this venture,” he says.

The time after he decided to quit his stable, well-paying job to become an entrepreneur hasn’t been easy for Jayakumar. He says that convincing his mother was difficult. “Given our financial background, the money that I was earning from my secure job was very important. We have no land and no savings to dip into. While there was some apprehension in her mind initially, she let me go ahead and try this,”

Jayakumar’s father’s death in February 2017 became a catalyst for him. “After his death, I decided to move my mother from Karaikudi to Bengaluru and started working harder to make things better for us. While I haven’t achieved anything great, this has been a great jump from where we came,” he says.

In its first month itself, TeteWood received about 30 orders, which was a great motivation for the team.

The first bulk order was placed by another online business called MonkStory. TeteWood also got the opportunity to showcase their products at the Chennai Ophthalmology Exhibition and that got them a good response from various retailers across India.

Launching the product out in the market was a huge challenge for Jayakumar. The fact that there was no reference point or similar products for customers who wanted to compare items, worked against TeteWood. “People who contacted us had so many queries. They wanted to know if the frames would be light, or even water resistant.”

To all these queries, he says, “Wooden frames look trendy, are suitable for Indian weather, eco-friendly, light (below 80g), unbreakable, water-resistant, skin-friendly and easy to clean.”

TeteWood also applied for and secured a patent for the patterns/engravings over wooden optical frames. A unique aspect about TeteWood is that they are open to all kinds of customization. Jayakumar says, “Customers can bring a piece of wood to us and we will make the desired spectacle out of it. For instance, even if a broken chair is given to us, we can make multiple frames out of it!”

The cost of a frame begins at ₹ 2,500. Each frame is not only completely customisable but can also be engraved with any name or design of the customers’ choice, and the frames are made and delivered within 2 days of placing an order.

“Each product is made only after an order is placed. We don’t stock any frame, but need exactly 8 hours to make it,” says Jayakumar.

TeteWood has recently received an investment of ₹30 lakh, and Jayakumar and his team are raring to go, brimming with new ideas that they want to execute.

We wish this young team all the best for everything they have planned for the future.