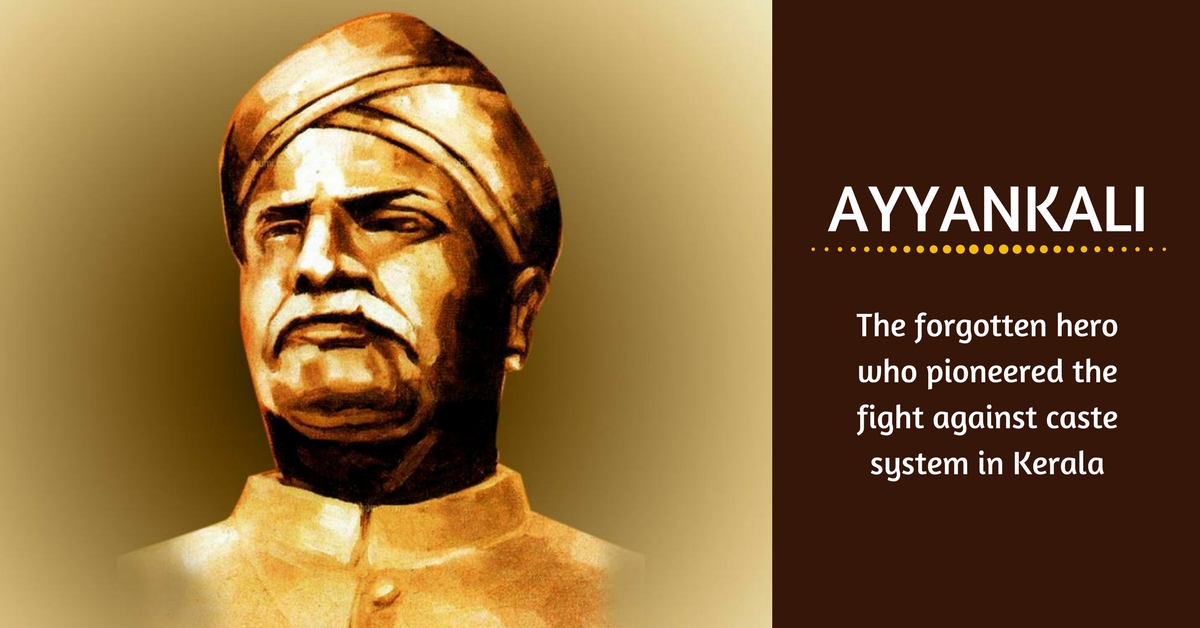 Ayyankali is considered to be one amongst the first tide of social reformers from the erstwhile state of Travancore in British India, who paved the way for many radical changes towards elevating the social wellbeing of lower caste communities in the region and improving access to education.

Over the years, Kerala has established itself as one of the most progressive states in the country.

From breaking free off the archaic caste system to lending a voice to the transgender community, the state has showcased immense courage treading into testing waters of realms that continue to remain overlooked by rest of the country.

This hadn’t always been the case in Kerala. Rewind 200 years back, the region heralded some of the most supremacist practices that would classify as a clear violation of human rights on varying degrees in today’s date and time.

The reason why such practices are no longer in place is that one young man from the Pulayar community in the late 19th century chose to question the strongholds of a rigid system that treated lower caste communities as untouchables and with scorn and contempt.

Ayyankali is considered to be one amongst the first tide of social reformers from the erstwhile state of Travancore in British India, who paved the way for many radical changes towards elevating the social wellbeing of lower caste communities in the region and improving access to education.

Born on 28 August 1863 in Perumkattuvila, Thiruvananthapuram, he grew up in a time where uprisings against the upper castes were seldom heard of and a Dalit was slain for even having the audacity of glancing at an upper caste individual.

Compared to his fellow brethren of the Pulayar community, Ayyankali was born into a slightly privileged family, which had been bestowed with five acres of land by a kind landlord. But privilege didn’t let the man close his eyes to the atrocities that were mercilessly being plied upon the lower castes.

You may also like: Meet Yedu Krishnan, One of the First Dalit Priests to Perform Rituals in Kerala Temple

Being illiterate like rest of the Dalit community, Ayyankali realised that only education had the power to shake the foundations of the bigoted system and lead way for a better world, where all were considered equal without any underlying prejudices.

However, the extent of discrimination imposed upon the people, which included being derided as ‘unseeables’ and ‘unapproachables’ apart from being tagged untouchables, infuriated Ayyankali as much as to set him on a revolutionary path of defying every known norm of an inhumane social structure.

He was also enraged by the open sexual abuse that Dalit women were subjected to.

From seeking sexual favours from married women to penalising them for wearing clothes in public, the families remained quiet on the harassment by upper strata, for fear of being punished or even killed.

Gathering a group of like-minded people, Ayyankali unleashed his first wave of rebellion through folk dance and music laced with dissent at the end of their workday. Voicing out sentiments of the downtrodden, the man soon began to be known as Urpillai and Moothapullai.

Another rebellious step taken by Ayyankali was to ride a bullock cart that he had bought out of his own money, on the public road reserved for the upper castes. Both the act of purchase and that of travelling on a road were traditionally the strongholds of the upper castes.

Also, not only were Dalits not allowed to walk on these roads, they were forced to maintain a distance of at least 64 steps from the Nair community and 128 steps from Namboodiris. And with a single act of defiance, Ayyankali succeeded in destabilising the traditional order.

He also showcased his opposition to the system in interesting ways. From dressing like an upper caste Nair to the market in Nedumangad to establishing a school for Dalit children in Venganoor, the man found great popularity amidst the lower castes. But ended up earning the ire of the upper caste communities and the school was soon burned down.

This made the man all the more resilient and with relentless advocacy managed to organise what may have been the first strike by agricultural workers in the region.

Withdrawing their labour from the fields that were owned by the upper castes, the protestors staged marches till the government acceded to a complete removal of restrictions on education.

He even prompted the Travancore government to issue an order mandating the admission of Dalit children in public schools in 1907. This too found great resistance from upper class officials in the Assembly, but Ayyankali wasn’t one to give up, after coming this far. After a struggle for three long years, the order was finally passed in favour of the general people in 1910.

After decades and probably centuries of being discriminated, the courage displayed by Ayyankali helped mushroom resolve among other oppressed communities in Travancore, leading to concurrent acts of defiance.

By then, the Pulayar community had gained the right to use most roads in the state, except for those leading to temples but it was a landmark achievement nevertheless.

You may also like: Making History: 36 Non-Brahmins & 6 Dalits to Undertake Priestly Jobs in Kerala

A contemporary of social reformer Sri Narayana Guru, Ayyankali drew a lot of inspiration from the great man, though their philosophies and the means of turning it into reality varied in different levels.

Another one of the major crises in the region was the rampant religious conversion amidst the lower castes, as an escape to a better and dignified living from years of persecution.

Ayyankali, on the contrary, believed that this could hardly change anything and implored to the Hindu society to reconsider their outdated customs and be more inclusive.

He also went on to find Sadhu Jana Paripalana Sangham (Association for the Protection of the Poor), which aimed at uniting members from suppressed communities and campaigned for access to schools along with raising funds to set up Pulayar-operated schools.

The man also vehemently advocated the inclusion of women into the mainstream and motivated Dalit women to be on par with their male counterparts during the struggle.

Though Kerala today stands as the land of the red, where workers enjoy better opportunities and privileges, it was Ayyankali who pioneered the movement that asserted the rights of workers long before the formation of any workers union or uprisings were even heard of.

The man was later instated as a member of the Assembly of Travancore, known as the Sree Moolam Popular Assembly (SMPA) or Praja Sabha. He also played an instrumental role in establishing community courts, whose local offices functioned in every branch of the SJPS.

Ayyankali passed away on 18 June 1941, leaving behind a better and more inclusive world for lower caste communities in Kerala. As a tribute to the man’s contributions that helped undermine the casteist system in the society, a life-size statue of the legendary reformer stands in the centre of Thiruvananthapuram.

Today, Ayyankali’s name remains forgotten in the annals of history, without whose acts of defiance, the state would have probably charted a very different course of events, and the Dalit community would have continued to be victims of persecution, just the way they face discrimination elsewhere in the country.