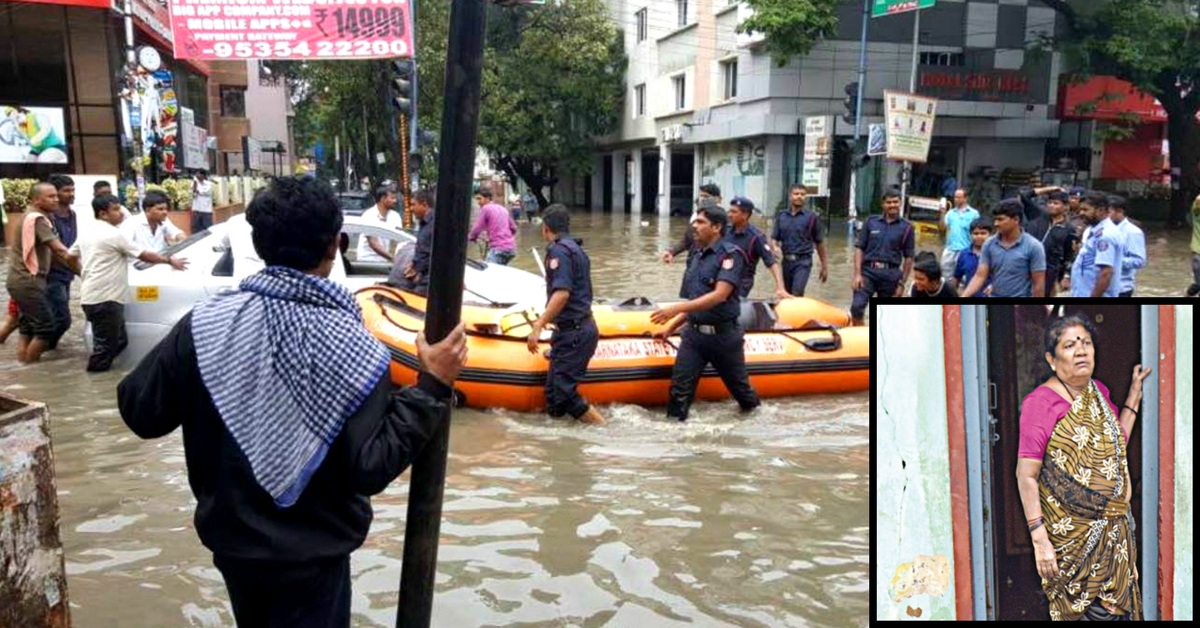 Jayamma, a resident of Kurubarahalli, had to rush out of her house on Friday evening as water fiercely gushed into her living area and upon hitting the road, she remembered her tenants’ children who were trapped in their houses.

In Bengaluru, rains have unleashed a seemingly never-ending spell of showers over the past few days. Many areas have been severely inundated with death toll reaching five.

Recording the highest rainfall in the last 115 years, the situation is quite grave with roads being waterlogged and people needing to be evacuated out of their homes in boats!

While the National Disaster Response Force (NDRF) is on the radar to rescue and locate missing persons, many residents are also bravely partaking in rescue operations, setting aside fear or apprehensions.

One such daring individual is a 65-year-old lady who single handedly managed to rescue eight children from drowning, while risking her own life.

Jayamma, a resident of Kurubarahalli, had to rush out of her house on Friday evening as water fiercely gushed into her living area. Upon hitting the road, she remembered her tenants’ children, aged between two and 10 years, who were trapped in their houses. Their parents had not yet returned from work.

“It was dark and I could only see those helpless children inside. The water was already at knee level and I knew that if I did not get them out immediately, disaster would have struck,” Jayamma told The New Indian Express.

Easier said than done, pulling out eight children from houses filled with waist-length water was no easy task! Especially when the person suffers from high blood pressure and diabetes.

Carrying two children at a time, Jayamma had to wade through the floodwaters for about 100 metres before reaching high ground. By the time all the eight children were brought to safety, the water level had risen to a good five feet.

You may also like: Floods Caught You off Guard? Here’s a ‘Monsoon Emergency Bag’ We Should All Keep

A widower, Jayamma chose to overlook the loss of her personal belongings to saving the children and attributes god in giving her the strength to save the little ones.

“All I could think of was taking the children to safety. I knew that the furniture, rations and clothes inside my house would all be washed away. But I can get them back anytime. How could I ever forgive myself if anything happened to the children,” Jayamma said.

The parents of the children, who are daily-waged labourers from Raichur and Gangavathy, live in two tiny houses on Kurubarahalli rented out by Jayamma. Had it not been for the selfless act of the old lady, these parents would have lost their children to the merciless rains in the city.

A salute to braveheart Jayamma.