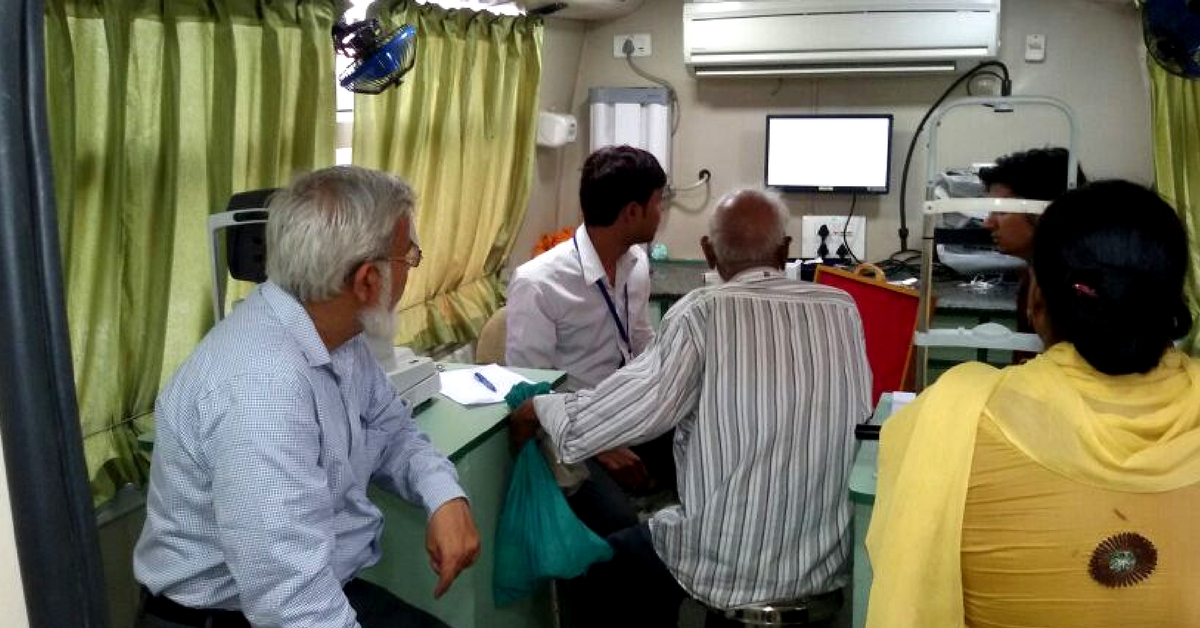 Fitted with state-of-the-art technology equipment, the vans appear to be the answer to the medical and technological disconnect between the Indian urban and rural.

India has a dismal doctor-to-patient ratio – around 1:1,900, against the UN-prescribed 1:1,000. The disparity is especially high in rural areas, with about 70 per cent of the country’s population living there.

The situation is especially worrisome as bad infrastructure and lack of facilities hold back doctors from taking on assignments in these areas.

What’s more, patients and their relatives from rural areas usually don’t want to visit doctors in the cities. The reasons range from the lack of education towards appropriate treatments to their worries of spending money on transportation and medical expenses in the city. Also, they worry about losing wages for the days they travel to the cities for their treatment.

However, one company seeks to change the scenario by introducing virtual healthcare through its customisable vans. The Crescendo Corporation rolled out their first indigenously built virtual healthcare vans in 2012. Fitted with state-of-the-art technology equipment, including PCs integrated with hardware, medical devices and software to be fitted on board; web-based solutions; independent database system, integrated PC-based digital ECG; ECHO; and digital stethoscope and pulmonary kits, with real-time screening of 12 leads ECG, HR, SPO2 and NIBP, even on low bandwidth, the vans appear to be the answer to the medical and technological disconnect between the Indian urban and rural.

Manufactured by Crescendo Corporation, an enterprise of Cdr. Binu Tom Jacob (Indian Navy, Retd.), the vans include advanced technology and various medical products like digital pulmonary kit, stethoscope, etc., which use technology to digitally transmit the obtained medical data to a doctor anywhere in the world.

But the idea for the virtual van was conceived by Girish Kumar, who was Country Head, India, for Healthcare & Life Sciences, Hewlett Packard. “I knew I was in a position to help bridge the gap between the necessity and impediment in rural healthcare. But I also realised that it had to be done by using a medical van that could take medical aid to the patient, instead of the other way around. The medical van, however, had to be created from scratch and tailor-made to specifications,” says Girish, who is now Country Head, Public Sector & Healthcare, DXC Technology.

Taking medical technology to people, one rural area at a time

The first two of the vans were built for two very definitive purposes – palliative care in Kerala under the aegis of philanthropic–CSR project of Hewlett Packard Ltd., as the company was known in 2012, and tele-psychiatry, for M.S. Chellamuthu Trust & Research Foundation in Madurai, Tamil Nadu.

The van provides tele-consulting and virtual healthcare for many underprivileged cancer patients through palliative care.

Crescendo Corporation then launched their second van in June 2013 for a tele-psychiatry project called ‘Ananya’, headed by Dr. C. Ramasubramanian, a consultant psychiatrist. Incidentally, Ananya was the first such project in the country, providing virtual healthcare for mentally challenged patients in the deprived sections of society — especially crucial in helping patients belonging to areas where treatments ranged from witchcraft to priests torturing patients to “drive away the spirits”.

Then, sometime in October 2013, the company built the Crescendo Ophthalmology Mobile Unit for the Delhi-based Sai Retina Foundation. The foundation is a centre of excellence in complete eye care, with retina screening to check for hypertensives in diabetics above the age of 10 years and elderlies over 60 years to screen for hypertensive retinopathy, diabetic retinopathy and age-related macular degeneration.

“We got funding from The Hans Foundation — a charitable trust fund that provides endowment for not-for-profit organizations in India — for creating a retina database among diabetics. It was a mammoth project, and among other things, it required a mobile ophthalmic van that had all the functionalities we needed, and could reach remote locations,” recounts Dr. Jayanto Shekhar Guha, senior vitreoretinal surgeon and chief operating officer of Sai Retina Foundation, who has, incidentally, been also involved in helping treat stone-pelting cases in Jammu Kashmir.

The good word for the vans had already begun spreading among its buyers. And retina-care specialist Dr. Kim Ramaswamy of Aravind Eye Hopsital, Madurai, recommended Cdr. Jacob and his virtual healthcare vans to Dr. Guha. “The van was delivered to Delhi in 2013, close to Ganesh Puja, and from day one, it has been operating 3–4 times a week on average, reaching the north-east parts of Delhi, NCR and further. Today, more than one lakh patients have got their screening done since 2013.”

With a lifespan of about 10 years, the ophthalmologic vans provide complete solutions for eye care, and are equipped with fundoscope, refractometer, vision chart, keratometer, etc. “I have heard of imported vans that are either defunct or have just folded up. But the Crescendo vans have been built to be able to take on the land in the rural areas, and it has served us fantastically till now,” says Dr Guha.

Haemostasis patches, anti-venom and defibrillator kits, on-the-spot kits for the primary detection of diseases like Hepatitis B, digital X-ray, ultra-sonography and endoscopy machines, etc. are some of the other fitments in the Crescendo virtual healthcare van.

Since 2012, the Crescendo Corporation has delivered tailor-made vans to the Samragni Swa Udyog Foundation, headed by lawyer and women’s right activist Pramila Nesargi; the Uttarakhand government (supported by The Hans Foundation); and the Shri Mata Vaishno Devi Narayana Superspeciality Hospital in Katra, Jammu and Kashmir, of which one was a women’s cancer diagnostic van, with mammogram and Pap smear and pathology facilities.

The vans are built to be healthcare platforms manned by the necessary paramedic staff to go into both rural and urban areas.

Here, by using the technology made available on the computer systems in the van, patients can access high-quality treatments by connecting with doctors who may be based far away.

In fact, Cdr. Jacob believes the vans are enablers, with unbounded potentials. The vans, which can also be used for attending to medical emergencies during disaster management, come fitted with LED TV, mic and speakers, and an awning that can be pulled out for patients to sit under as they wait their turn. The LED TVs are used for displaying health-awareness programmes, health-related documentaries, and shows on creating awareness on social issues and sexual abuse, and educational videos for training purposes.

“In summary, the vans we make at Crescendo are not merely transports,” says Cdr. Jacob. “The vans make it possible to take medical aid to the people’s doorsteps and connect them to medical facilities. And if the internet bandwidth permits, patients can even communicate live with the doctor.”