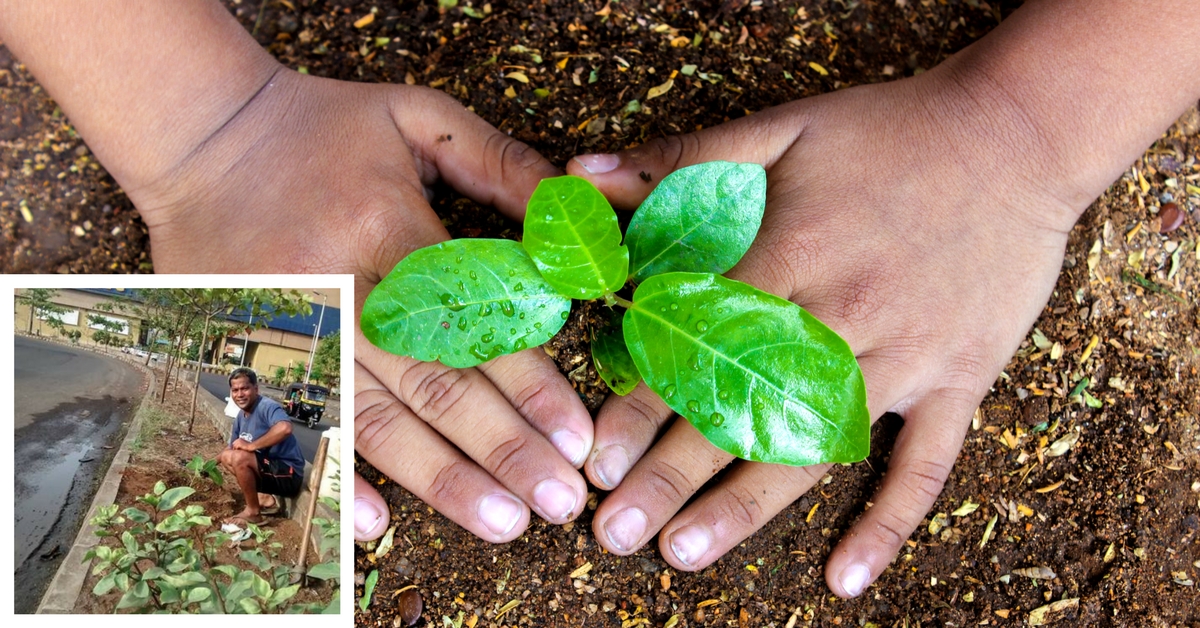 Planting more than 60 saplings between intersections and medians where the bikes parked, Vikas nurtured them with regular watering and care.

Development and infrastructure projects do change the face of a city but at the price of its forest cover.

With the increasing pace that trees are facing the axe in the name of public interest, we fail to recognize the environmental perils that await us – or we choose to comfortably ignore it.

But one man from Navi Mumbai is doing everything in his capacity to make the city green again. After having planted more than 400 saplings across the city in last ten years, Vikas Shivaji Chavan keeps a track on their growth as well.

The 39-year-old, who works in the advertising field, donned the green crusader cape in 2007 when he decided to render a two-wheeler parking lot at Central Plaza in Navi Mumbai with greenery.

Planting more than 60 saplings between intersections and medians where the bikes parked, Vikas nurtured them with regular watering and care. With constant nurturing, he stated that close 70-80 per cent of his plantations had survived the sun and rain.

“The slow growth of a sapling into a plant and then a tree is the way of life. This gave me the inspiration and the passion to go ahead with at least one plantation weekly for the past ten years. With growing urbanisation and development, the idea was to protect the environment, possibly in the most basic manner, by planting trees,” said Vikas told Hindustan Times.

He even went as far as the Eastern Expressway from Nahur and carried his green operations all the way up to Ghatkopar and Vikhroli.

You may also like: Mission Green Mumbai: City to Get 12,000 Coconut Trees in the Next 6 Months!

Supporting him in his crusade is Laxman Kadam, a retired banker from Navi Mumbai, who helps Vikas plant saplings as and when he can. “For me, planting these saplings is equivalent to our prayers to the Almighty. Chavan helped me do that,” he said. In fact, Vikas has found random people watering the plants that he had once planted.

Spending a total of ₹5,000 for the equipment, the first round of saplings planted by Vikas were offered by Vayjanti Joshi from Nerul for free. Following which, he started buying the plants from a nursery in Kalyan.

The interesting aspect in Vikas’s initiative is that he plants only those saplings that fall under the indigenous category and has so far planted around 60 different native species. The man plans on planting another 60 types in upcoming years.