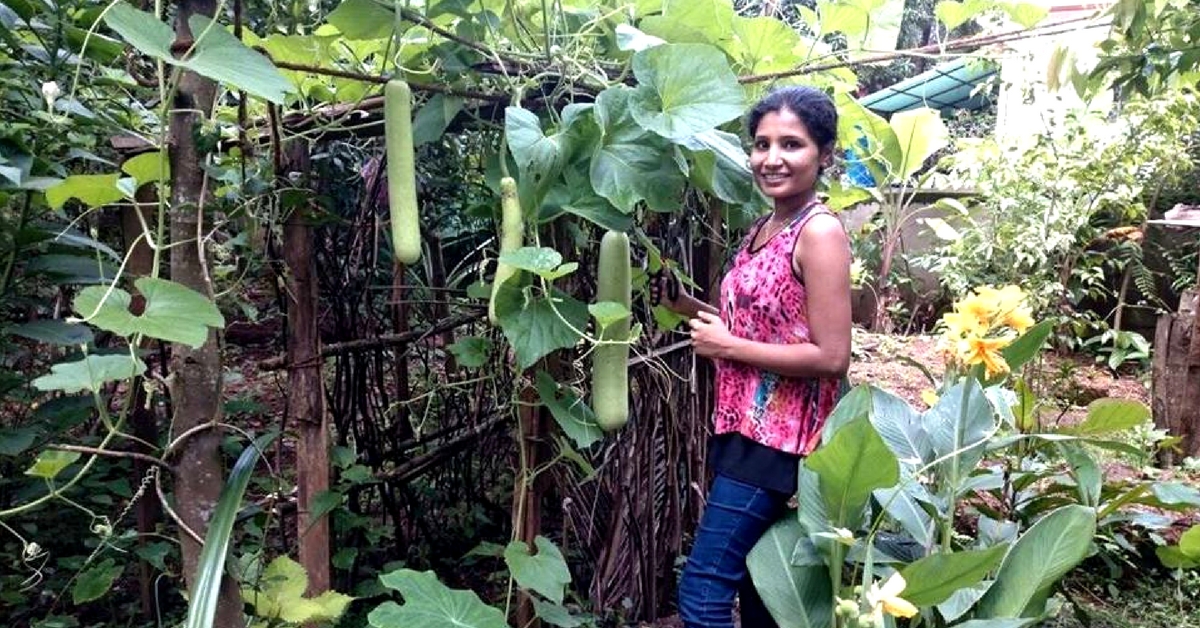 In Goa, organic farming has caught people’s attention, who want to experience the satisfaction of growing their own food organically.

As you walk into the kitchen garden of Peter Fernandes and Rosie Harding in Assagao, Goa, you realise that it’s no less than a forest, where the land is covered with mulch and the 700 square meters of area is covered with perennial greens. This 4-year-old kitchen garden is the perfect place to understand how you can grow your food without using chemicals and by following the permaculture method for farming.

Peter likes to describe it as an edible garden which provides health and nutrition. A few years ago, his garden was no more than a wasteland. Then, both of them worked on the soil fertility to grow their own food. Now, they grow vegetables and fruits, including a variety of spinach, red and green amaranth, a variety of gourd, herbs and beans among others.

“It’s really important that we produce what is safe and rich in nutrition. For us, growing our own food has led to substantial benefits. Given how easy it is to incorporate edible plants into your garden, there’s no reason why all of us can’t do it,” says Peter.

He adds that now they are focusing on perennial plants that are local and mostly considered as weeds.

They have a total of around 150 species of plants that are edible. Also, in one small patch of land, he has 11 types of citrus fruits that include oranges, 13 varieties of mangoes and nine varieties of guava – like the rare black guava.

For Peter, this is where people can learn about farming and share the knowledge with others. “We started this because we wanted to eat healthy and nutritious food,” he says. He is on a sabbatical from his job of consultancy.

Another interesting aspect of their garden is that they do not sell their produce. “As our garden grew successfully in the past years, we started getting surplus produce. But, we don’t want to sell it. We give it to our friends, neighbours or just compost it,” says Peter, adding, “Some 30 years ago, most people in Goa had kitchen gardens, where they would grow their food – be it chillies, red amaranths, different types of gourds, cucumber and fruits like coconut, bananas, guavas, etc. But, now this concept is fading with time.”

Growing food organically, however, is catching people’s attention. All it needs is time and dedication. There are a lot people, who, in their own capacity, are building their own kitchen garden. Terency Luis from Verna has a garden with more than 60 vegetables, fruits, herbs, spices and medicinal plants. Terency does all the work on the 1,950 sq m property herself. She has also managed to encourage her neighbours to grow organic vegetables.

She makes compost using a tumbling composter that she has assembled.

Fish waste is dumped into a 200 litre plastic drum, where she mixes sawdust and uses the fish waste as a fertiliser for the plants. A traditional compost pit is also present, where leaves and other waste sit before they are transferred into the banana circle to fully decompose. Terency has created several raised beds using materials like wood, laterite stones, cement posts, bricks etc. Each of these are filled with soil that she makes on the property, using the various methods of composting that she employs.

If space is a problem for you to start a kitchen garden, then the solution is community farming. Abhay Kesarkar from Ponda is involved in community farming in a housing complex in Ponda – a town 30km from Panaji. They started their kitchen garden on a terrace of the building and four families are involved in this activity. They grow around 30 seasonal varieties of fruits and vegetables.

Yogita Mehra, who regularly conducts organic gardening workshops in Goa and Mumbai, has noticed a trend of growing your own food in Goa. They’re mostly urban dwellers who don’t want to compromise on the quality of the food and at the same time want to experience the satisfaction of growing it themselves.

She conducts workshops with her husband, Karan Manral, where they teach how, even a small verandah can be turned into a kitchen garden, provided that it receives at least five hours of sunlight for the plants to grow well.

People also like the idea of composting. Goa experiences an issue of waste management. So it’s great that there are people who compost at homes. A portable composting unit called Khamba, introduced by a Bangalore-based company Daily Dump, is quite popular in Goa. It not only gives the much required compost to the plants, but also solves the regular issue of wet waste (which is around 70 per cent of our total waste generated at home).

The government is also working on promoting organic farming in the state.

The agriculture department recently launched a state sector scheme, under which, 50 per cent assistance will be given on the cost of organic inputs limited to ₹10,000 per hectare and maximum up to 2 hectares per beneficiary for all categories of farmers. These organic inputs are organic fertilisers, bio-fertilisers, bio-pesticides and bio-control agents. Farmers possessing a valid Krishi card and cultivating a minimum area of 0.1 hectare in the state are eligible for this scheme.

In 2011, the Organic Farming Association of India (OFAI) held its national executive committee meeting in Goa.

Taking advantage of the organic farming promoters coming to Goa, the Konkan Fruit Fest was pushed to April end and exhibition and sale of organic produce like fruits and vegetables was organised as part of the event. Now, this event is held every year in Goa focusing on a particular fruit or plant.

Another success story is the Chorao Farmers Club which was initiated in the year 2008 with a group of 22 farmers from the island village of Chorao. It was started by a retired school teacher Premanand Mhambre.

Today, it has around 100 members, 50 per cent of whom are women. They sell various produce like coconut oil, cashew nuts, etc., but their most famous products are the salt-tolerant, traditional variety of rice called Corgut, grown without using chemical fertilisers. It has high fibre content, essential oils, digestible protein as well as high levels of vitamin B complex.

They have other products like Mancurad Mango that sell like hot cakes in the month of April and May. All these initiatives in Goa in the last ten years or so, have helped people become more aware towards what they consume, and also become more environment conscious.