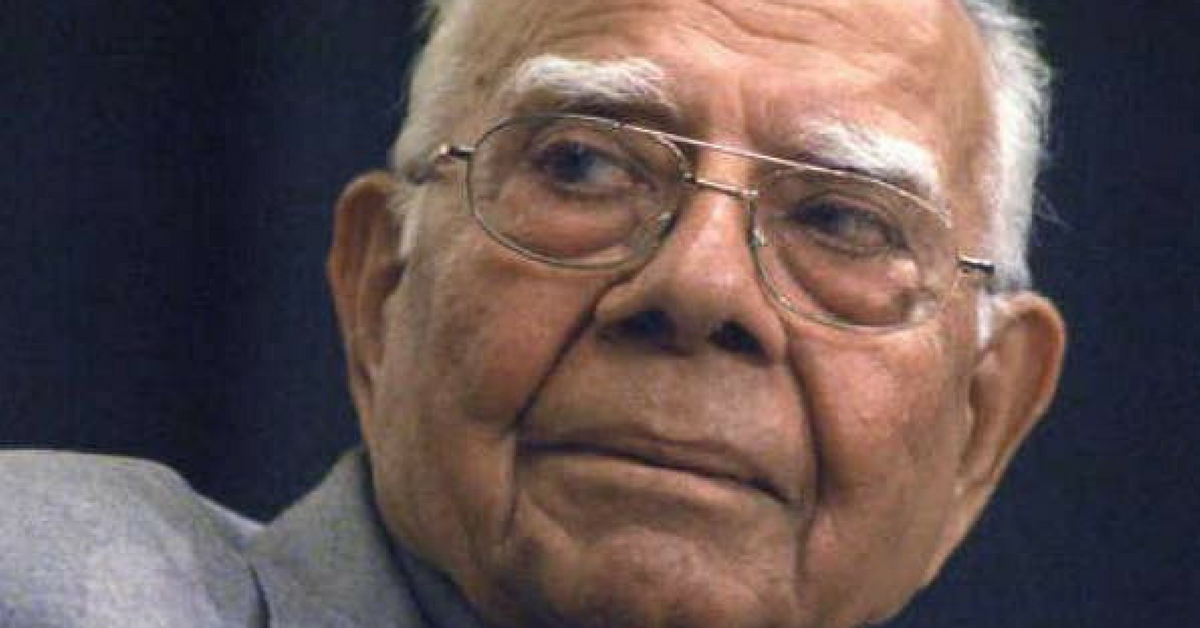 He earned a reputation of being a ‘smuggler’s lawyer’ after he defended Haji Mastan, in a smuggling case.

In 2004, I met Ram Boolchand Jethmalani for the first time. As a student of law, I remember the excitement at being able to meet and hear a lecture delivered by Ram Jethmalani. He was addressing a group of third-year law students about the importance of a legal concept called ‘Dying Declaration.’ That is the one concept I shall never forget.

During the course of my legal education and later when I started litigation, I had the opportunity to meet him several more times. And I cherished each one of them.

“Age is an issue of mind over matter, if you don’t mind it doesn’t matter” – Mark Twain.

After practicing for over seven decades, Ram Jethmalani, on 8 September 2017, announced his retirement during a function organised by the Apex bar body, the Bar Council of India, to felicitate the new Chief Justice of India Justice Dipak Misra.

Here are some things that you ought to know about this maverick lawyer:

1. Born in 1923 in Shikarpur, Ram Jethmalani was a bright student and got a triple promotion when in school.

2. Ram Jethmalani obtained a law degree when he was all of 17 and practised law in Karachi until the partition of India. He chose to study law and pursue it despite opposition from his father.

3. Being the youngest lawyer in Sind, he had to persuade the then Chief Justice of Sind to pass a special resolution to relax the rules (which then mandated that a lawyer had to be 21 years or above), and allow him to practice.

4. He moved to Bombay just after India attained freedom in 1948 and started practising there.

5. In 1959, Ram Jethmalani appeared in the famous K.M. Nanavati vs. State of Bombay case. This was among the last cases to be heard as a jury trial in India, as the government abolished jury trials soon after.

6. He earned a reputation of being a ‘smuggler’s lawyer’ after he defended Haji Mastan, in a smuggling case.

7. He was elected a member of Parliament in the 6th and 7th Lok Sabha on a Bharatiya Janata Party (BJP) ticket from Bombay.

9. In 2013, Ram Jethmalani was expelled from BJP, for accusing it of being “silent against high corruption”

10. From defending the killers of the former Prime Minister Indira Gandhi to the Dalal street scammers Harshad Mehta and Ketan Parekh. From opposing the death sentence of Afzal Guru to representing clients like Dravida Munnetra Kazhagam MP Kanimozhi, he has defended them all with the same gusto and belief.

10. From defending the killers of the former Prime Minister Indira Gandhi to the Dalal street scammers Harshad Mehta and Ketan Parekh. From opposing the death sentence of Afzal Guru to representing clients like Dravida Munnetra Kazhagam MP Kanimozhi, he has defended them all with the same gusto and belief.

11. In 1987, at the age of 64, Ram Jethmalani announced his candidature for the President’s post. He also launched a political front and called it Bharat Mukti Morcha.

12. In 1995 he launched his own political party called ‘Pavitra Hindustan Kazhagam’, with a motto to achieve transparency in the functioning of Indian Democracy.

13. In more recent occurrences, he made news for having sent the Delhi Government a bill of over 1.5 crores for appearing for Chief Minister Arvind Kejriwal in a defamation suit.