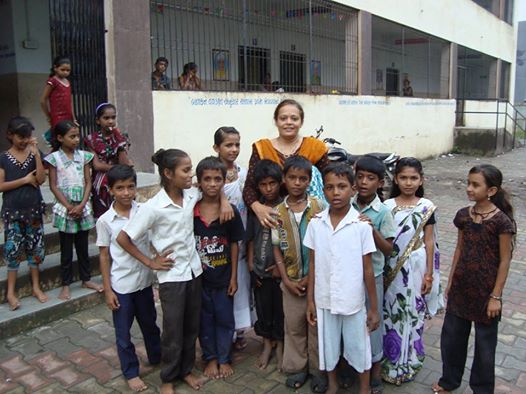 We all have a little good in ourselves. Sometimes we just need a little push to put the good into action. An inspirational speech by a celebrity, a meeting with a role model or sometimes just small incidents in our routine lives may ignite the fire to bring a change.

Inspired by her father, Beena Rao is one such person who is changing the lives of thousands of slum children around her with her simple initiative.

Her father was her role model ever since she was a kid. A violinist by profession, he would teach blind students for free in his spare time and this always inspired Rao.

“I have always seen my father helping the less privileged and that inspired me. I hoped that one day I would do something that would leave a bigger impact on the lives of the underprivileged and I am glad that I managed to do so,” Rao says.

She introduced Prayas, a free coaching institute for slum children, with the help of her husband in 2006. Initially having started with teaching 2-3 children herself, she now has a team of 34 volunteers who teach around 1,200 students at eight different coaching centers across Surat, Gujarat.

“I noticed that in spite of the introduction of RTEs and other educational schemes, the dropout rate in schools remained high. So, I went to IIM, Ahmedabad and talked to Anil Gupta, who is also taking care of National Innovation Foundation. I shared my concerns with him and took his advice to solve the problem,” she says.

What does she do?

Rao, with the help of various volunteers, conducts coaching for the students of classes 3rd to 8th at various locations for free. She pays Rs.1,000-1,500 to the volunteers out of her own pocket or some donations that Prayas receives.

A batch has 30 students and classes are conducted in the evening from 6 pm to 8 pm. Apart from teaching basic subjects, she also imparts moral education, and encourages students to engage in various art and craft activities.

The curriculum lays an emphasis on holistic education by including discipline, yoga, mannerisms, and other aspects which are often neglected by the government schools.

The students from higher classes are taken for various science and sports workshops to train them in specific fields so that it could help them in the future as well. These workshops have benefited around 1,000 students in various areas.

Rao also started a Mobile Laboratory to promote the spirit of science in underprivileged kids and to identify those who have potential to pursue a career in the sciences. These workshops are conducted once a month by B.Ed. students.

A couple of months of training brought radical changes in the students. They stopped using abusive language and slang, mellowed down a bit and learnt a few basic courtesies. They became more disciplined and started showing better results in academics.

Rao and her team also distribute books to these slum children to inculcate reading habits in them. Around 5,000 students have benefited from this so far.

Rao has now registered Sadamani Charitable Trust where people can directly contribute to the initiative. The donations made to this trust will be exempted from taxation soon.

“Convincing the children and their families was a challenge,” Rao says.

It took a lot of time to build trust and get the children and families interested. “Also, getting dedicated volunteers with the right spirit is important. And, because we don’t pay them much, we have to convince them to strike the right chord,” Rao says.

The team also has to come up with various innovative and interesting ways to keep the students engaged.

“Every day is a lesson here. People search for God, I see God in these children and when I see the positive changes in these kids, that satisfaction cannot be measured,” Rao says.

Rao recalls an incident when she needed Rs.15,000 to pay the volunteers but she didn’t get any response from the people she approached. A man from Halpati Samaj community who owned a liquor shop came to Rao and offered help. Rao was surprised and asked him the reason behind his gracious gesture. “I don’t want my kids to sell liquor when they grow old. I would like them to study and get a good job and you are helping them achieve it,” the man said. Rao was moved and decided to do more for the community.

Rao earns nothing from the trust, and she doesn’t expect anything in return except participation from slum children. She has a mission to make these students as good as mainstream school students.

We meet a lot of people and some people bring a positive wave in the lives of people around them. Rao, with her initiative, has given hope to these slum children to dream big and opt for better careers.

Want to help Beena Rao with her project? Contact her at- beena.d.rao@gmail.com
To know more about the work of Prayas, you could check out their Facebook page.

About the Author: Born with a hobby to travel, talk, express and write, Shreya gets to do all of that and is even paid for it! Interested in rural development and social issues, she dreams of actually bringing a change in society and writing a book of her own one day. When she is not preaching others about a better India she is busy watching movies and playing video games. Follow her on twitter: @shreya08
Editing: Shruti Mehrotra
Promotion