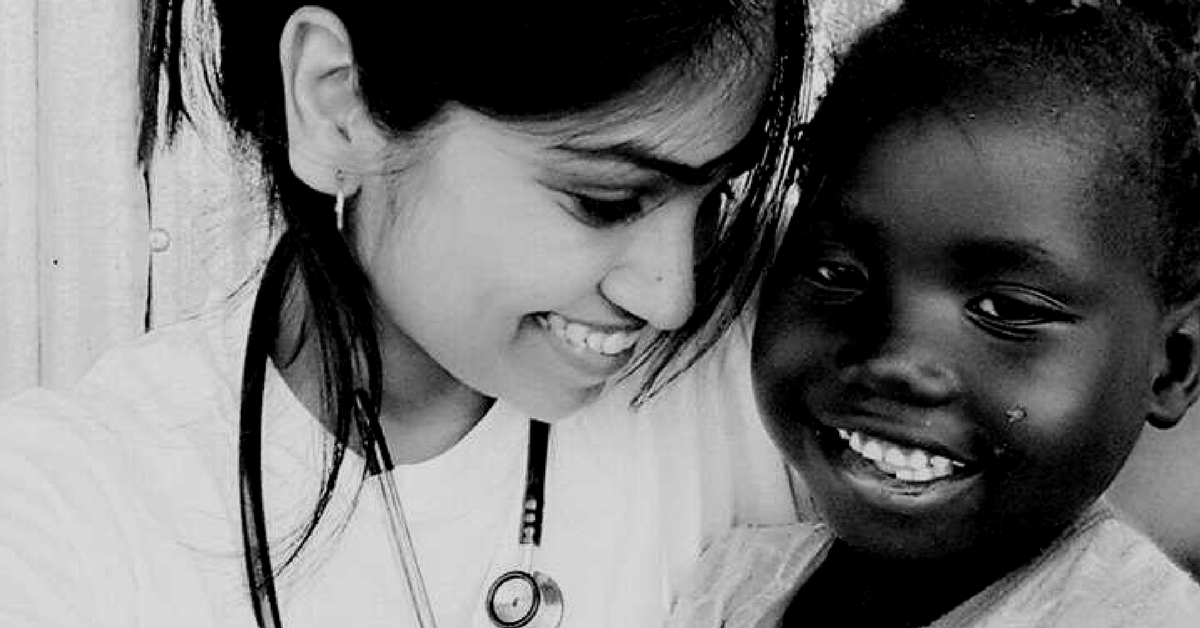 Hailing from Vijayawada in Andhra Pradesh, Dr Shiny Kaki is no ordinary general physician. Over the last three years, she has served in conflict zones marred with civil wars and helped save civilians wounded in wars and successfully saved lives during epidemic outbreaks.

The clock had struck 3 am. She lay in her makeshift refugee tent in the middle of a dessert in Sub Saharan Africa. The news about armed men robbing refugees and deployed medical personnel spread like wildfire. The zipper on her tent wasn’t working. Anybody could cut it open with a knife and attack her.

The radio that would usually reverberate with news about the outside world in the restrictive space of the tent was switched off, to not attract the attention of the thieves that struck in the dark. Hushed whispers were exchanged, but her tent drowned in pin drop silence. She saw the shadow on the tent wall getting bigger and bigger. The outline of his gun stood in sharp contrast as her heart threatened to leap off her chest.

“I am sure he could hear my heartbeat, just like I could. I shut my eyes for a brief moment, I knew they were close. Suddenly a voice resounded from a distance. When I opened my eyes, they were retreating back. I was safe,” recalls 30-year-old Shiny Kaki – who was on a mission in Sudan as a full time doctor with Médecins Sans Frontières/Doctors Without Borders (MSF).

Hailing from Vijayawada in Andhra Pradesh, Dr Shiny Kaki is no ordinary general physician. Over the last three years, she has served in conflict zones marred with civil wars and helped save civilians wounded in wars and successfully saved lives during epidemic outbreaks.

In the last three years, Shiny Kaki has been on successful missions in Nigeria, Sudan, Somalia and Yemen.

After completing her MBBS at CMC College in Vellore at 2009, Shiny dedicated her life to two years of rural service in a leprosy hospital in Allahabad, where her team successfully cured many patients.

“There is a widespread misconception that leprosy is incurable. Especially in Uttar Pradesh where I was practicing, people thought leprosy affected those cursed by the Gods or was a result of past sins. So, the challenge was to educate and spread awareness about the disease.”

As part of her research on leprosy she observed their help-seeking habits. How patients despite noticing symptoms, they wouldn’t openly seek treatment due to prevalent stigma. They wouldn’t come for follow up treatments, or take care of their limbs and sterilise them. They waited until the ulcer got bigger, and needed immediate medical intervention and surgery.

“Leprosy is completely curable,” says Shiny, where the very first dose of anti-bacteria has the power to kill 90% of the bacteria. But the stigma keeps patients from seeking help or acknowledging the disease.

Her Doctors without Borders journey began in September 2013.

What is Doctors Without Borders?

Doctors Without Borders/Médecins Sans Frontières (MSF) is an independent international humanitarian organisation that delivers emergency medical aid to people affected by armed conflict, epidemics, natural and manmade disasters or exclusion from health care in more than 60 countries with over 3,000 doctors, nurses, logisticians, water-and-sanitation experts, administrators and other professionals to work alongside over 25,000 locally hired staff.

Expressing the reason behind her decision to join the organisation, she says, “Doctors without Borders had always attracted my attention. I admired doctors who served across borders risking their own lives.”

One night, when she was watching a movie, she decided to go on to the website and apply. A couple of days later, she got through the scheduled interview, and even cleared the next round in Delhi!

“When I look back, one of the major incidents that prompted me to apply was the death of one of my cousins in a car crash. I was in depression for three months and refused to come out of my room. I was in so much grief, that I didn’t know why I made the impulsive decision. All I knew was, I had to apply,” she says.

While Shiny thought she would do only one one mission and return to complete her PG programme and get a mainstream job, three years later, she’s still serving with Doctors without Borders.

Her first project was at Warder located at the border between Ethiopia and Somalia, a civil-conflict zone where the sound of crossfire was deafening. Even though weapons were not allowed in the hospital, militants and little children holding guns was a common sight.

Knowing the medical personnel had no political leanings and were only there to save lives, they did not hurt them. Working in the emergency room, HIV and TB ward and paediatric ward, she witnessed how residents were caught in the crossfire between the Ethiopian army and the Somalian police.

Later she went to a refugee camp in South Sudan where basic medical services – like maternity – were lacking.

In Yemen, the civil war, that began in 2015 continues to have grave consequences with a severe decline in sanitation, absence of clean food, safe drinking water and medical supplies. This led to an outbreak of cholera in the region. Shiny was posted at one of the frontline cholera treatment centres.

In sharp contrast, Maiduguri in Nigeria, where she served, suffered from rising cases of Under 5 mortality. Hundreds of children were were losing their lives due to malnutrition.

Did she ever step back and reconsider her decision of joining MFS? When you are living in a refugee tent in the middle of a dessert in Sub Saharan Africa there are various complications!

“I would think about the comfort of my home sometimes. There have been cases where doctors have been kidnapped, MSF staff have been targeted and kidnapped. But daily challenges include the scorching heat. The sun burns your skin, it doesn’t tan it. It literally turns pink and can be a painful ordeal to touch. The hard water is your last resort to wash the grime in your hair.”

Shedding light on work challenges, she expresses how local staff at the camp, mostly men, refused to follow her orders or corrections while handling patients because she was young, and a woman.

“It’s hard to be hated. Everybody is speaking behind your back and there’s absolutely nobody rallying behind you. There were times when I wanted to take action against the Ministry of Health employees, but I was told to be lenient. Look my loyalty lies with my patient first, not the staff, and I stood my ground fearlessly.”

Even today when she’s out on a mission, the colour drains off her dear ones’ faces. But onward she marches to a new place on a new day to save lives.

In her message to young women she says, “You are as progressive as you make your environment to be. Do not shut up and go through life, thinking you are a woman. Push back and challenge circumstances. Get into conflict and don’t be afraid of confrontation. Let your voice be heard. Don’t be dread authority. When you know you are right, it shouldn’t matter what the consequences are.”

You can connect to Shiny Kaki at shinykaki@gmailcom.