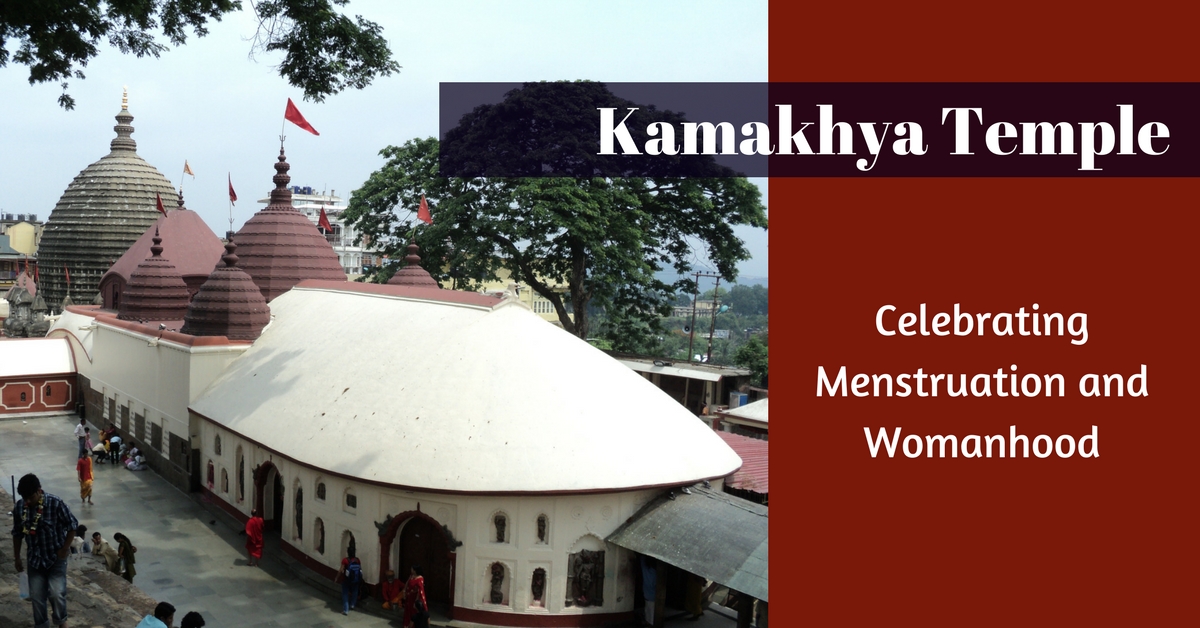 Contrary to the shaming treatment that menstruation gets elsewhere in India, at the Kamakhya Temple, it is revered as the ability of a woman to conceive.

While a large percentage of people in India continue to remain aloof when it comes to speaking out loud about menstruation and the issues faced by women, a temple that is well worn with time celebrates one of the most natural biological processes.

The Kamakhya temple is not just a famous pilgrimage site in Assam, but is also a unique temple in the country.

Located on the Nilachal hill in the capital city of Guwahati, the deity of the temple, Kamakhya Devi is revered as the ‘Bleeding Goddess’.

It is believed that the ‘Garvagriha‘ or the sanctum sanctorum of the temple houses the mythical womb and vagina of the Hindu goddess Shakti.

Curiously enough, every year during the month of Ashaad (June), the Brahmaputra river near Kamakhya turns red. It is believed that the goddess ‘menstruates’ during this period.

Contrary to the shaming treatment that menstruation gets elsewhere in India, here it is revered as the ability of a woman to conceive.

Considering this to be a woman’s power to give birth, the deity and temple of Kamakhya is a celebration of this ‘shakti’ within every woman.

The story of origin is behind the temple quite interesting. It revolves around the Hindu gods Shiva and Sati.

Legend has it that Sati fought with her husband to be part of the grand yajna that her father was offering to appease the gods—of which both were purposefully not invited to. Paying no heed to her husband’s advice, Sati headed to the yajna nevertheless, only to be insulted by her father.

The last straw was when he spoke ill of Shiva as well. Unable to bear the insult, Sati leapt into the very sacrificial fire of the yajna.

When Shiva came to know of what had happened, his anger knew no limits. Carrying his wife’s burnt corpse, he went on a rampage with his ‘Tandav‘ or the dance of destruction.

While all other gods cowered in fear under Shiva’s rage, it was Vishnu who sent his chakra and cut the body, in order to calm the aggrieved deity.

It is believed that Sati’s body parts fell in 108 locations across the country, which are today known as Shakti peeths.

The place where her womb and vagina fell is what constitutes the Kamakhya temple.

Kamakhya finds its name from the Hindu God of love, Kamadeva. As the story goes, the god had sought out Shakti’s womb and genitals after having lost virility to a curse.

As a tribute to Shakti and her ability to lend back Kamadeva his potency, the deity of Kamakhya Devi was installed and continues to be worshipped until today.

The place where the Kamakhya temple stands today is also considered to be where Shiva first courted Sati.

In a country that continues its archaic attitude towards menstruation as unholy and gruesome, it is important for each one of us to know the progressive approach that the Kamakhya temple displays—of celebrating womanhood.

While there is no image of Shakti in the temple complex, it is Yoni or the female genitalia of the goddess located in the corner of the cave in the temple that is the object of reverence.