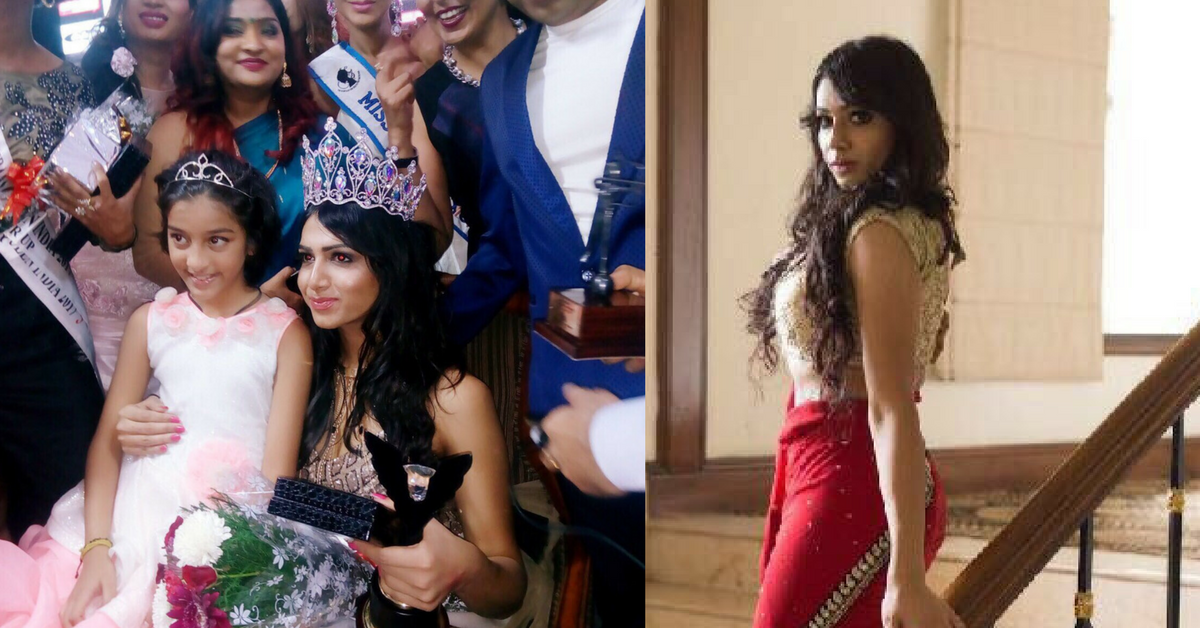 “Gender is not something that is defined by what is in between your legs. Gender is just a notion in our minds.”

Nitasha Biswas, on Sunday, created history by bagging the Miss Trans Queen 2017 title at a beauty pageant held in Gurugram.

Nitasha is a 26-year-old trans woman who hails from Kolkata. A student of St. Xaviers Kolkata, Nitasha completed her management studies and moved to Delhi to pursue a degree in fashion.

Nitasha decided to pursue modeling and took it up a year ago in Delhi.

Speaking about her journey to The Better India she says, “From a very young age I knew I was a gender dysphoria. I knew I wanted to change this, but at the same time, I knew I needed to complete my basic education.”

“I used to constantly Google to find out about transgenders. I remember the moment I finished my college; I flew to Delhi to start my journey.”

Nitasha lost her mother at a young age, and it was her father who played both the roles. She talks very fondly of her family and says, “Initially it was tough for my father to accept that his son was going through a transformation. In fact, it impacted him so deeply that he stopped talking to me for almost seven months. That was perhaps the toughest part of my conversion – not having my family beside me.”

The process of transformation is not an easy one. Nitasha spoke about the Hormone Replacement Therapy (HRT) that one has to undergo and the physical and emotional toll that it takes on the body.

“During the transformation process, there is a phase when you have both male and female attributes, and it was impossible for me to even step out of my house during that period. It was a lonely journey. I was a source of a lot of ridicule.”

Through this journey, Nitasha has lost many friends and family but what kept her going was her belief in herself. Nitasha has also had to undergo rigorous psychological sessions to help her cope with the situation.

Today Nitasha’s father and brother both participate in her happiness and are proud of the achievements that Nitasha has.

“Winning the title has been great. Everyone is still in the celebratory mood around me.” Nitasha’s next port of call is Thailand where she will be representing India in the Miss Trans Queen International.

When asked about the highs and lows that she went through as she was preparing for the pageant she said, “This journey has been of emotions. With every conversation I had with my fellow contestants the things that were common were – depression, loneliness, and a lot of pain. The moment the crown was placed on my head, I thought of all the people I have lost in my journey in getting here. It has been a difficult and sometimes painful journey, but I am glad I stuck to it.”

Nitasha views are winning the pageant as one that comes with a lot of responsibility. She wants to use this platform that she has been given to work towards making it a little better for transgenders.

She says, “Many transgenders go through a lot of emotional pain and severe depression. In fact, because of not getting mainstream jobs, they often have to resort to taking up sex work. This is what needs to desperately change.”

As we end our conversation, she says, “Let’s learn to be humane. Gender is not something that is defined by what is in between your legs. Gender is just a notion in our minds. I was nurtured and brought up by my father who played both the gender roles – he was a mother and a father to me.”

She also said, “I am not asking for any rights from any of you. By doing that I will be automatically put you on a higher pedestal. The rights you have, I have too. Let’s just learn to open our hearts and accept.”

We wish Nitasha all the very best for the Miss Trans Queen International pageant.

To read about how the Trans Queen India pageant came into existence read our article here.