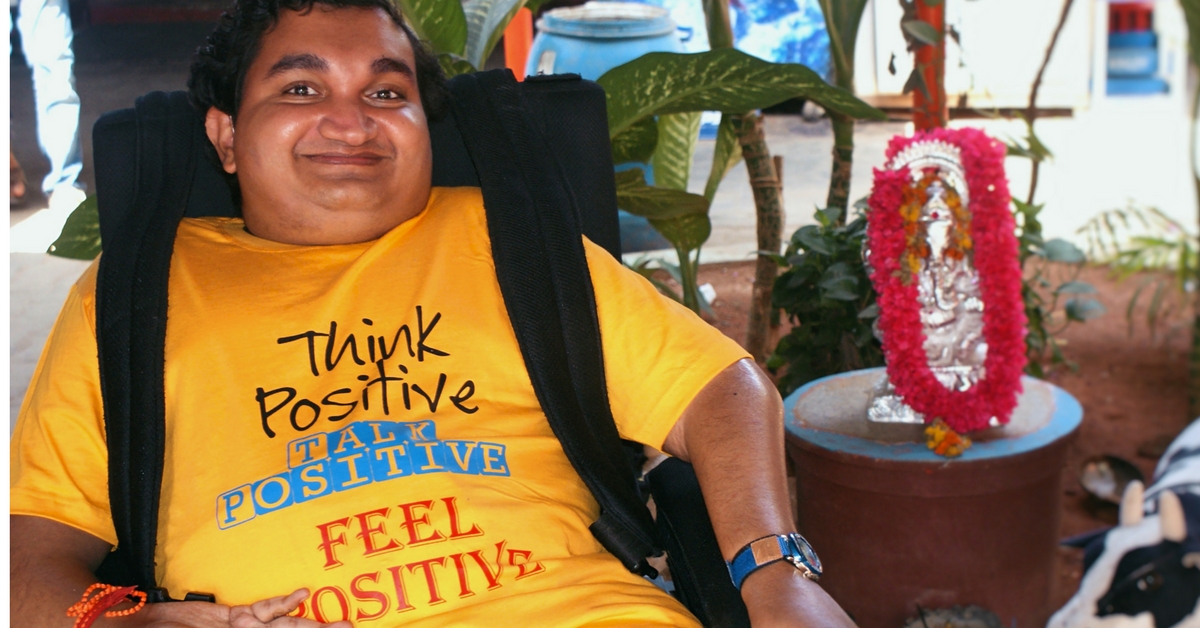 This 26-year-old from Puttaparthi, Andhra Pradesh, has suffered more than 50 fractures till date. Undefeated in spirit, he is the recipient of the CavinKare Ability Mastery Award 2017.

Sai Kaustuv Dasgupta has suffered more than 50 fractures. A rare bone disorder called Osteogenesis Imperfecta, also known as ‘brittle bone disease’, afflicts him – a disease that affects one in every 20,000 people, mainly owing to a lack of collagen. In 2001, Dasgupta fell down in his bathroom. Both his knee bones were fractured. The doctors, who were in a hurry, plastered his legs while the joints were still bent. After cutting the plaster, Dasgupta found that both his knee joints were now fixed in that position. He got confined in an electric wheelchair after that horrible incident. At present all his joints are completely fixed and he cannot move an inch on his own. But he has proved that the disability has affected only his body and not his mind.

Dasgupta used to dance when he was a child. But one day the doctors suggested that dance is not for him. That was when he realised that he was not like other children – that he was different.

Once he realised that his bones were brittle as glass, he thought of doing something that would require him to stay in a room.

Inspired by his mother Shila Dasgupta who used to sing, perform and teach music, he took up singing to express himself. His mother was his first music guru. She had completed her bachelors in music from Allahabad University. Later he took up Hindustani vocal training from Smt. Kumudini Mundkur, and went on to win the Dishari Award for the Best Child Singer of West Bengal in 1999-2000. He got several opportunities to showcase his talent before accomplished artistes of India such as Manna Dey, Ustad Rashid Khan, Anup Jalota, Anuradha Poudwal, Ajoy Chakraborty, and Bhupen Hazarika. Later, Dasgupta composed more than 150 songs and released five music albums. He says music was always in his soul. Becoming a playback singer was his dream. Though he suffered from frequent fractures, which prevented him from attending everything required to be a top artist, he would perform at many opening ceremonies for musical events.

Though only two fingers functioned on his left hand, Dasgupta further trained himself to become a graphic designer.

After completing his intermediate, he was not able to sit for his BA exam. Somehow he managed to complete a diploma course in computers. “It was so difficult to learn designing from home,” he says. “I made up my mind and thought I’ll overcome this challenge as well. I decided to be a self-taught designer. I had to learn every tool of designing by reading books or going through tutorials online.”

In 2012, he joined a non-profit organisation as a designer. Gradually, he started working with other digital media graphics and people started giving him work.

During that difficult phase, Dasgupta understood the “purpose of life”. Seeing that he found happiness and peace without going outside at all, people started coming to him, seeking motivation. They gradually started inviting him to events through Skype where he would motivate audiences.

Today, Dasgupta loves to inspire students who want to discover the purpose of their lives.

In 2015, when Dasgupta became free after six years of confinement, he got into his electric wheelchair and came out, only to find a completely different world around him. He was shocked to see the poor condition of public spaces and realised that nobody seemed to be aware of disability rights. He says,

“Public places like banks and post offices should be accessible as wheelchair-bound people have the right to live independently.”

Dasgupta expresses that he would like to meet the Prime Minister to discuss ideas to make cities and towns more accessible.

In 2016, Umoja, an international travel portal company, organised a competition throughout India to help differently-abled people travel. Dasgupta won that All India #WheelchairWanderlust Competition 2016, to become the first person to enter Goa in an accessible car by travelling for 16 hours. To encourage him, the State Commissioner for Disabilities in the Government of Goa, Anuradha Joshi, arranged a state level meeting where she took his feedback on how to make Goa more accessible for the differently-abled.

“Traveling in a wheelchair does not have to be as difficult as we think. You simply have to hire a special wheelchair accessible car, which has a ramp behind,” he says.

After 26 years, having emerged strong, Dasgupta believes that life has given him a lesson – that we have to improve ourselves as individuals, ‘as true human beings’, and realise the purpose of our lives.

“Please, do not compare yourself with others. Just work towards something that you are really good at. Find your creative skills and capabilities.”

Looking back, Dasgupta feels that his birth itself was unique. Being a 90% differently-abled guy, he is proud to have turned his disability into his “specialty” to help more people smile.