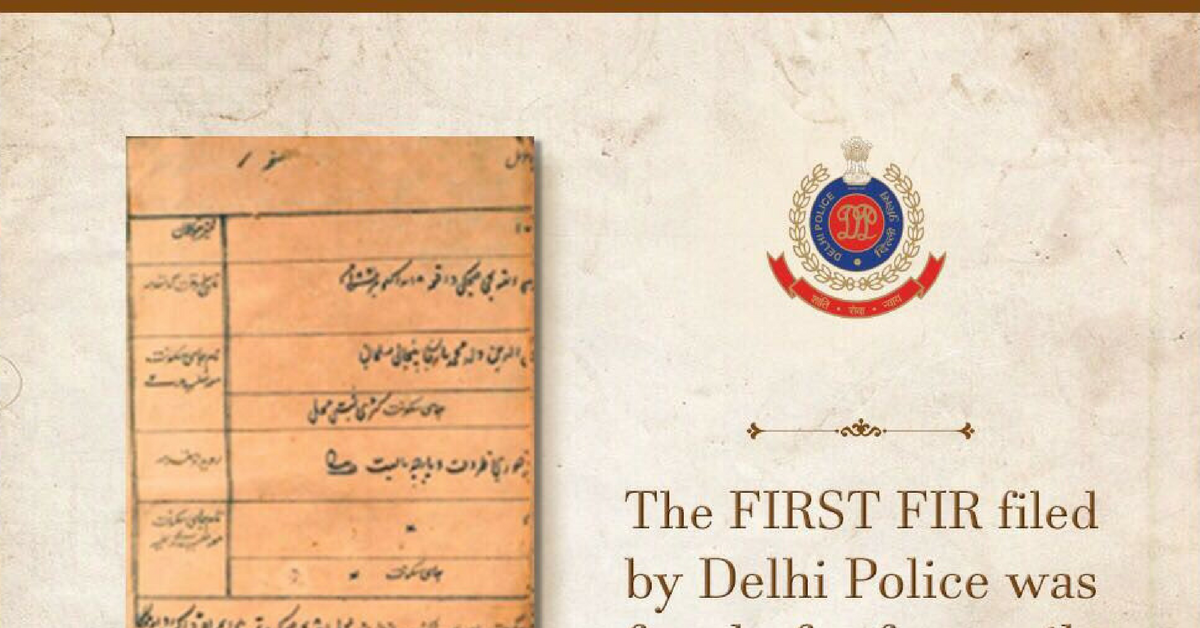 Delhi Police tweeted the evidence of the crime that happened in the nineteenth century as #ThrowbackThurday.

Nothing has really happened until it has been recorded.
–    Virginia Woolf

Thank God then, that the Delhi Police had recorded the first FIR (First Information Report) they had filed – long ago on October 18, 1861.
So now we know about the first ever crime that happened in Delhi.

Delhi Police tweeted the evidence of the crime that happened in the nineteenth century as #ThrowbackThurday.

#ThrowbackThursday with some of the rare moments in the history of @DelhiPolice. #tbt #KhaasHaiItihaas pic.twitter.com/V78SbRIbTq

The tweet also had hash tag #KhaasHaiItihaas which means that ‘History is special’.
The FIR is written in Urdu, as it was the official language of the area in the 19th century, and recorded the theft of utensils and other items from a home.
The stolen items mentioned in the FIR are three large cooking utensils, three small vessels, a bowl, a Hukka (smoking pipe), women’s clothing and a kulfi (ice cream).
The FIR was filed 156 years ago under the Police Act at the Subzi Mandi police station in North Delhi by Maeeuddin, a resident of Katra Sheesh Mahal.
The total worth of items stolen from his house was 45 annas (about Rs 2.81 then).

This valuable piece of history soon went viral and twitter-users were thrilled to know about it.

the most beautifull thing its in urdu…and i saw few words of Urdu still being used in registering FIR…got it done for my mobile ?

Great!! It addon one of most valuable information in my mind. Please use to post such Historical Information.https://t.co/5hixRPErm2

Some were even curious to know what happened with the case finally.

Kindly let us know if the stolen property were recovered & your first charge sheet filed in the court led to conviction of the accused?

And few wanted more such tweets from the Delhi Police

A copy of the FIR has been put inside the Subzi Mandi Police Station, and the document has been framed and put on display at the Delhi Police Museum since 2014.
We hope Delhi Police tells us more about this case and how it was closed in their next tweet!