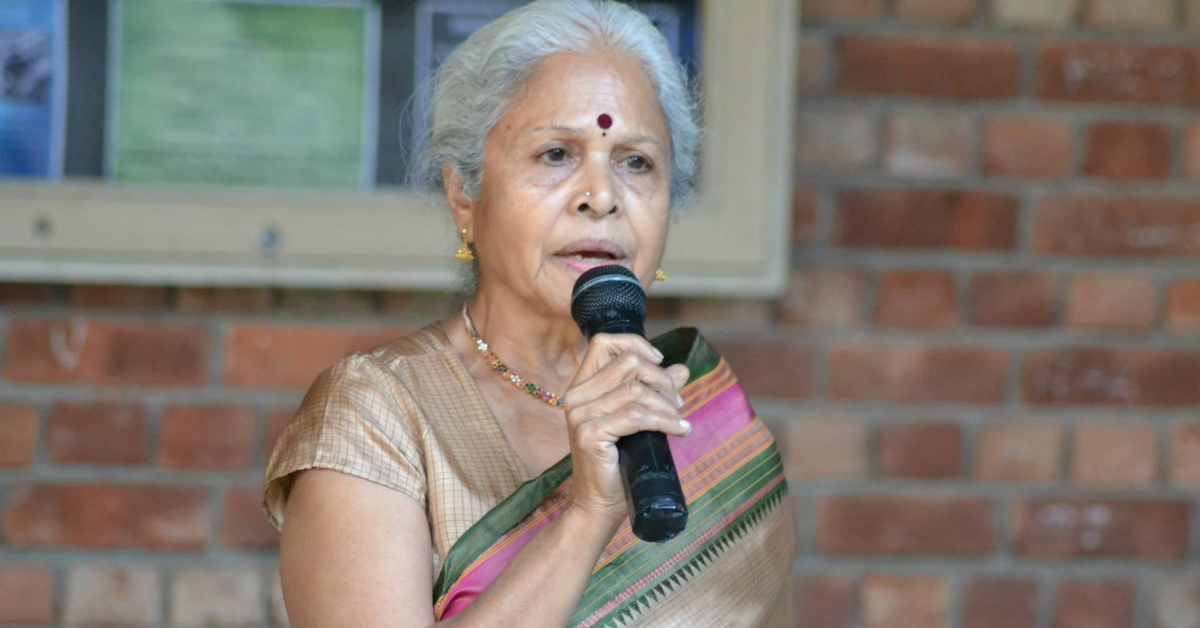 In a society where widows had to wear white clothes, apply no sindoor, etc., she simply started living her life as she would have if her husband were alive.

Prema Iyer, 78 years old, was born into a traditional middle class Iyer family. Her father was a Central government employee, and her mother, a housewife. From the age of three, Prema has lived in Delhi. Brought up rather conservatively, the opportunity to Lady Sriram College (LSR) was practically like an entry into a different world. Looking back, she says, “I was surprised my parents let me go to such a progressive institution like LSR, but I guess my parents were certain that they wanted an officer as a husband for me and hence decided to let me go for the exposure.”

When she enrolled into college, she was very hopeful, but soon realised it was going to be difficult for her to find her own. “I was labelled as an ‘ugly duckling’, ‘good-for-nothing-blockhead’. This severely depleted my self-esteem, and I even started stammering.”

It took Prema a long while to get over her inhibition and regain her confidence.

Married at the age of 18 to an Indian Air Force officer B.R.Iyer, Prema looked forward to building a life with him, it had other plans for her. Before the marriage hit its two year mark, she lost her husband in an accident. Recounting the day, she says, “On the morning of the day he passed away, I had a heated argument with him and urged him to work on the ground, since we were expecting our first child (eight months pregnant). He told me death could come anywhere, not just when he was flying.”

After his untimely death, Prema recounts of the initial state of shock she was in. I was like a dead person, I didn’t care if I ate, got any sleep, and nothing mattered. She even contemplated suicide – but there was life inside her that kept her alive.

What changed her was something that a group captain’s wife said to her, “Prema, I am ashamed of you. You are the wife of a serviceman. You ought to stand up and take his legacy forward.”

She says she had two choices before her – either live under the charity doled out by relatives or make something of her life ahead. Prema was offered a job with the Indian Air Force on compassionate grounds, where she served in the Civilian Administrative Organization for 20 years and took a voluntary retirement after her daughter was married. “It was extremely difficult in the beginning to walk into a place where I was a junior to many of those who reported to my husband. But nothing deterred me.”

A month after the death of her husband, Prema’s daughter was born. This was another turning point in her life. She decided to bring her daughter up as any normal mother would. In a society where widows had to wear white clothes, apply no sindoor, etc., she simply started living her life as she would have if her husband were alive. “I stopped caring about what people would say. I heard all of it, but never paid any heed. My own parents, while they were lovely, were bound by societal norms. But I didn’t care.”

“At the age of 15, my daughter told me that if I wanted to marry again, I should, and that I shouldn’t be bound by the fact that I had to look after her. Her saying that to me, made it all worth it.”

Even at 78, her enthusiasm for life has not reduced. In the year 2013, she joined the University of Petroleum and Energy Studies (UPES) in Dehradun as their in-house counsellor called ‘Campus Nani.’ Her role here, as the name suggests, is to be a like doting grandmother to all the students. To listen to the students, teachers, and even parents, and help them overcome their issues. One of Prema’s students, who wishes to remain anonymous, at the college says, “It was only because of Nani that I was able to face my fears and emerge stronger. I was being stalked and didn’t know where to turn.”

“Nani not only held my hand throughout, but also helped me face my stalker and get rid of the fear in me.”

Another student, Harish from Jharkhand, spoke about how not speaking in English made him suffer from low self-esteem and as a result was also unable to participate in any activity in college, but Nani supported and boosted his confidence.

While it seems like a breeze, Prema found it hard to make a connect with the students initially. “I would keep sitting in my room for hours and days, without anyone coming to me. That is when I decided I would go to them if they didn’t come to me. I would go to the library, football ground, mess, and everywhere I could. It started off slowly, but soon just by the word of mouth, I was connected to each student on the campus.”

Prema talks about how fulfilling her experience as Campus Nani has been. A parent, whose child Prema had helped deal with an addiction issue, said to her,

“Perhaps you lost your husband early on in life only so that you could bring in so much happiness and joy to the lives of so many.”

As the wife of an IAF officer, Prema embodies the spirit of India in her. She says with pride, “We have a duty towards our nation. And that duty isn’t about going to jail for a cause or any great sacrifice, it begins with being that best in what we do. Even a sweeper who is working must strive to be the best he can. That will help in nation building.”

Prema wakes up by 3:30 am every morning with a deep sense of gratitude. When asked how she manages to see the silver lining in everything, she says, “for me gratitude is not an attitude, it is an overwhelming sense of thankfulness.”

Prema’s mission in life is to reach out to as many people as she can. She welcomes calls, e-mails, and even meeting people and just talking to them.

You can email her at – premaiyer17@gmail.com