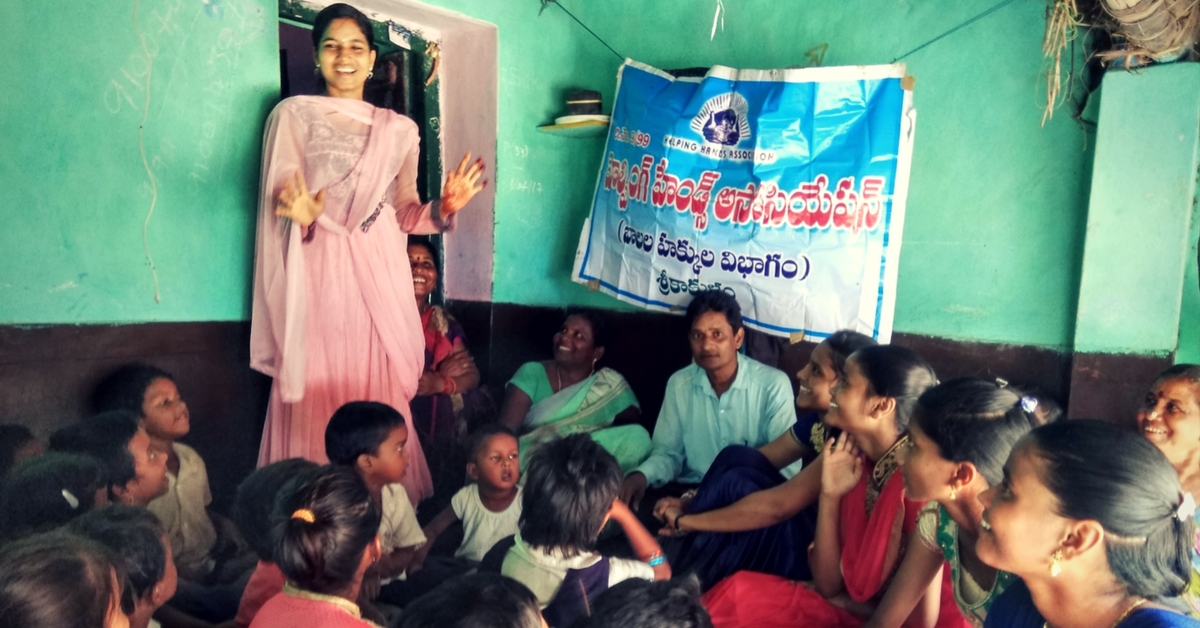 A quest to ‘free’ our girl children from socially regressive practices this Independence Day.

It is a sad fact that even after 70 years of Independence, it remains a challenge for children like Ramya to live their dream as they fall victim to poverty, deep-rooted practise of child marriage in the society and an education system that is yet to provide better access to school infrastructure. However Ramya’s burning desire to study and make a difference in her community despite the many hurdles that came her way, like child labour, migration and child marriage is an inspiring and heartening story.

Ramya lives in K.K. Naidu Petta village with 175 other families. She was only 6 years old when she started shouldering responsibilities at home by taking care of her brother. Her parents travelled a lot for work as her father, a rickshaw puller met with an accident and lost his job. Their frequency of migration increased after Ramya completed Std 5.  High school was 6 km away and her parents were not keen to send her that far to school. However, on the condition that she would completely manage household responsibilities like cooking and managing her brother’s schooling, she was reluctantly allowed to continue her studies. Having won the battle for now, the fiery 11 year old decided to take a plunge into English medium education as she felt it would help with higher studies.

The long walk to school, the long hours of work at home or the difficulty to cope with a new medium of instruction did not deter her from the pursuit of education.

During her summer vacations she even joined her parents and travelled to Vijayawada, Visakhapatnam and Odisha for work. Eventually she completed her Std 10 with a 7.7 GPA (Grade Point Average). This was the time when she again met with resistance from her parents to continue her studies. Child marriage is a common practice among the Reddika community that Ramya hails from and her parents were worried that a delayed marriage would only increase her dowry.  So when Ramya was adamant to not to marry and instead study further, a long argument forced her to leave home and stay with her Aunt at Vishkapatnam where she worked as a domestic work, all this just to avoid getting married.

After two years and much persuasion, her parents agreed to let her re-start her education on the condition that she would be managing the household and would be married as soon as they found a suitable groom.

Ramya joined Koyyam Junior college and opted for the Science stream as she harboured dreams of becoming a doctor, a dire need in her community.

This was a turning point in Ramya’s life. She met the community organisers from CRY Supported project, Helping Hands Association (HHA) and joined the children’s collective organised by them.

When she learnt about child rights, Ramya realised that she had found a perfect platform to pursue her dreams.

She was especially inspired to work for the rights of girl children and she started actively participating in all the activities of HHA in the village.  She took a lead role and inspired other children by sharing her own story. This gave them new courage to talk against child marriage in their own homes.  One such time when Ramya was actively campaigning against child marriage, she came across an instance of a child marriage that was planned. When convincing the parents on the ills of child marriage fell to deaf ears, she directly contacted the groom and explained the situation.  Ramya told him that her friend wanted to continue her education and also explained to him about the negative impacts of child marriage.  To her surprise, the groom was convinced and voluntarily postponed the marriage by two or three years.  That was her first successful case of directly dealing with the issue and boosted Ramya’s confidence further although she was accused of destroying her friend’s life by some. The spark in Ramya ignited her passion and she continued to campaign against child marriage and was successful in stopping 5 child marriages and preventing many later.  Ramya inspired many children in the collective to strive hard to realise their rights and stood as a role model in her community.

Ramya was busily working at a field near her village, cutting the wood along with her mother, unaware that the results of Std 12 were out. The next day, her college lecturer called her parents and informed them that she had stood college first in her stream (Biology, Physics, Chemistry) and her happiness knew no bounds. She had secured 966/1000 marks.  Ramya had put in all the effort took these exams as a challenge as she was determined to continue her studies.

As Ramya passed an important milestone in her life with flying colours, she was not allowed to even apply for medical entrance exam as her parents refused the idea. Her movements were restricted and she could not confide in her mentor from HHA.

Once again she stood against the discrimination and refused to co-operate with her parents by going on a hunger strike at home.

HHA were keeping a close watch on Ramya. They visited her at home and tried to convince her parents to let her continue her education. The fact that her parents could not afford the education, books or coaching  was a harsh reality that needed to be addressed. The staff counseled her parents and assured them of sponsorship for Ramya.

Ramya’s mentor from HHA says, “When we first met Ramya in 2015, we observed the spark in her to achieve bigger things in life. Looking at her, nobody would imagine that she would have undergone such hardships in life. We built her capacities in the area of child rights and gave her an opportunity to play a lead role in the child collective. We were happy to see her involvement in the community  and her concern for the girls as she felt their problems as her own problems. We at HHA knew that if we cannot convince her parents and give her an opportunity to realise her goals in life, it would only hit the morale of other girls in the village and hence we were determined to ensure continuity of her education.”

With much persuasion, Ramya’s parents agreed to let her continue her education.  She is now staying with her Aunt at Srikakulam and pursuing her B.Sc degree.  Ramya is likely to join a Government Nursing College and is awaiting admission in September 2017. She also plans to give her medical entrance exam next year.

Ramya’s dream is to see all parents in the village allow their daughters to study further, refrain from child marriage and recognise the value of a girl child.  She hopes that one day parents in the village would feel proud about their daughters with regards to their education and jobs. She also strives to be a role model in her own community i.e. Reddika where no woman has joined a government or private job up till now.

Recalling the entire episode in her life, Ramya says “I was not really sure whether I would be able to continue my studies after Intermediate as my parents came down heavily upon me to get married. If not for timely intervention by HHA staff, things might have been different for me.  The difficult experiences and hardships that I had since my childhood gave me determination to pursue my goals. My desire to stand as a role model not only in my village but in the society will never fade away. I have joined in B.Sc. degree course for now just to escape from the danger of child marriage and I will prepare well for medical entrance test next year and get a seat in M.B.B.S. Once I become a doctor, I  want to serve my village and also visit different villages to make girls aware of their rights, strengthen them, inspire them and make them role models in their own communities.”

This Independence Day, let’s help unlock a child’s potential through education with CRY-Child Rights and You.

You can help more efforts like this by donating to CRY and its partner organisations here.