Booking an Ola Share or Uber Pool? Here’s One Law You Must Know About Before Confirming That Ride! It comes under the grey area of law as it violates the archaic Section 66 of the motor vehicle act which prohibits use of private vehicles for hire or rewards.

Ride sharing giants, Uber and Ola have transformed the way people commute in today’s world. The daily commuters have ditched auto rides for cabs. People prefer to take share rides as they are cheaper while comfortable. Ride sharing is when the commuters traveling in the same direction join forces to ride in one vehicle and split costs. In fact, the United Nations said at Rio in 2012: “Let’s travel together” to tackle the environmental menace. However, the present rule and regulations in India are not very conducive to supporting carpooling in the country. Despite innumerable benefits of carpooling, like the slashes in individual costs for passengers, reduction of congestion on roads and curtailing air and noise pollution, it still comes under the grey area of law as it violates Section 66 of the motor vehicle act which prohibits use of private vehicles for hire or rewards. 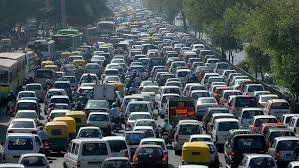 In India, to run a vehicle as a transport vehicle, the owner of the motor vehicle needs to obtain a permit under Section 66 of the Act. Currently, there are no categorical rules to govern cab sharing services offered by cab aggregators. Traditionally, cabs operating in India are given permission under Contract Carriage permits.

Contract carriages refer to a motor vehicle which carries passengers for hire or reward and does so under a contract. This includes maxi cabs and motor cabs. The definition of contract carriage stipulates that the vehicle does not stop to pick up or drop passengers during the journey.

If the cab service providers need to run ride shares they must apply for stage carriage permits.

Stage carrier means when the motor vehicle is allowed to carry more than six passengers excluding the driver for hire or reward at separate fares either for the whole journey or for stages of the journey. Stage carriage permits are generally obtained by DTC bus services or tempos. If cab services are permitted to operate share rides then it will simply replicate the public transport system.

Considering the permit issue, the Karnataka government banned Ola share and Uber pool asserting that ride sharing is not permitted within the ambit of Motor Vehicles Act, 1988 and that sharing of rides is not a part of contract carriage permit granted under 1989 Karnataka Motor Vehicle Rule. The shuttle bus service aggregator, ZipGo, faced a similar situation and was forced to shut its operation in 2015.

It’s perfectly legal for individuals to pool their cars for mutual benefits, however, the issue arises when we talk about a cloud based solution to pool private cars and commercially “exploit” and “violate” Section 66 of the Motor Vehicles Act.

At this juncture, it is also pertinent to examine how safe it is to take a carpool ride as provided by the cab aggregators. Safety in carpooling is always a matter of concern as you never can assure what sort of passengers you will be commuting with. Legally if your cab meets with an accident, Uber or Ola will not be responsible as they completely absolve themselves from all liabilities. The entire liability falls on the drive.

These cab aggregators clearly mention in their terms and conditions that they will not be responsible for anything that happens to the passenger while riding their cab. “As per the Motor Vehicle Driving law it is illegal to use car pooling. However, the department is overlooking this as there aren’t any complaints from the public,” said an official with the Kerala Motor Vehicle Department. Similarly in the case of Odisha: “We have not received any complaints, but will verify and take necessary action,” said Odisha Transport Commissioner.Till now only Kolkata has provided a provisional license to Ola and Uber so far.

The need of the hour is to have fresh rules and regulations to govern carpooling and cab services are India. The present law does not address the concerns brought by internet companies which are altering the consumer behavior like never before.