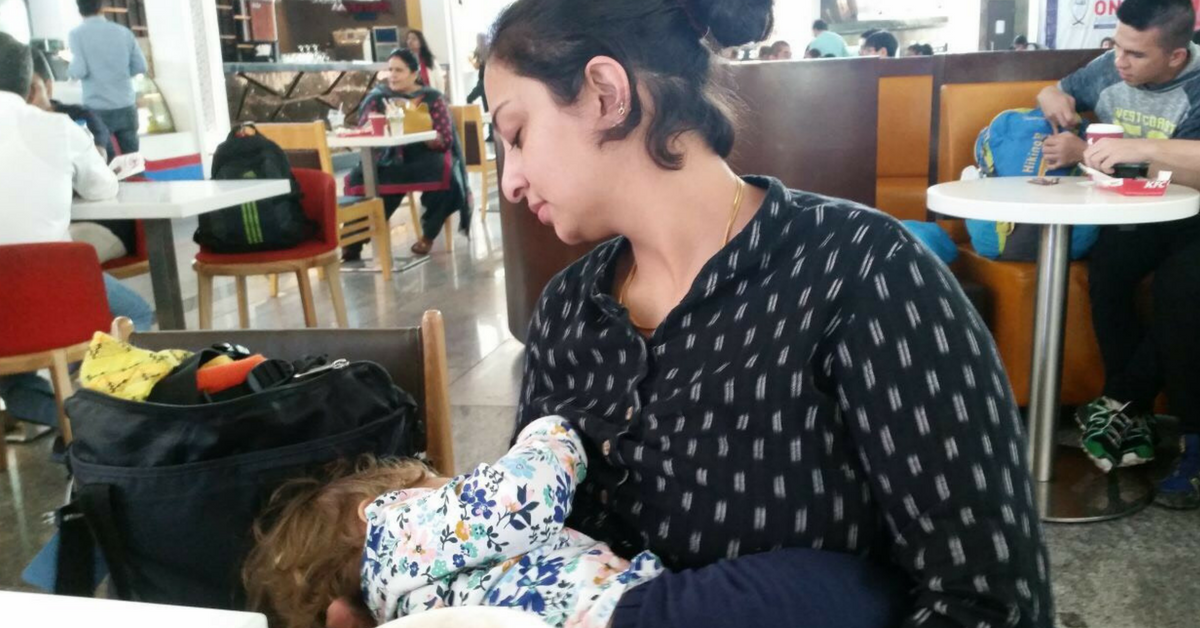 Workplaces need to be more sensitive to the needs of a nursing mother. Photo Source: Wikimedia Commons

Did you know that prohibiting or discriminating against a women who breastfeeds in public can attract a fine in Sao Paulo?

Earlier this year, the Maternity Benefit Act was amended to increase maternity leave from the existing 12 to 26 weeks. The announcement came as a boon to many new mothers and mothers-to-be across India.

Malathi (name changed), a new mother was to re-join work in July this year, was happy about the amended law and was hopeful of being able to pump at her workplace, so she could continue breastfeeding her child for at least a year. But she was in for a rude shock when she learned that her company offered no facility or infrastructure to do so. Despite making several requests to HR, nothing concrete came of it.

“I spent a good ten days in the office washroom, pumping and keeping the milk aside for my child. In fact even storing the pumped milk in my office pantry seemed to become a huge issue. Some of my colleagues were rather disgusted by it. This was the trigger for me to put in my papers since I was unable to take it,” she says. “Unless people’s attitudes change, the law can not do anything,” she concludes.

The World Health Organisation (WHO) recommends exclusive breastfeeding until babies are six months, saying it can be continued till age two, complemented with other homemade food.

If this needs to be followed, shouldn’t we start making it easier for women to feed in public, and provide enabling facilities at workplaces?

Even though many women, like Malathi, continue to face such discrimination, companies are starting to be more receptive to the needs of new mothers by providing a more conducive environment.

Aparna Deshmukh, a resident of Gurgaon says, “I had a relatively comfortable pregnancy because of my colleagues’ efforts. They worked around some of my tantrums and ensured that I was happy.”

You may also like: ‘Azan Can Wait, A Newborn Can’t Wait To Be Breastfed’

Some companies have established tie-ups with crèches and day-care facilities, which are at a walking distance from office premises. This way, women who are nursing can continue to do so while ensuring a safe environment for the child. Major medical colleges across Mumbai will soon have rooms for women to breastfeed their children. Called ‘Hirkani Kaksh’, these rooms will not only give lactating mothers privacy, but will also have the facility to refrigerate milk for later use, said a Hindustan Times report.

In July this year, Railway Minister Suresh Prabhu, acting on the recommendation of Maneka Gandhi, the Women and Child Development Minister, announced that railway stations would be equipped with a segregated area in waiting halls for lactating mothers to feed their babies.

As of today, more than 100 railway stations have been furnished with this facility.

Priya Mani, a consultant with a leading firm in Chennai says, “I am currently in my 36th week and have been given the option of working from home. I intend to resume work after the 6-month maternity break.”

“Knowing that my organisation has wellness rooms where moms can pump and store is very re-assuring.”

While there are no laws banning women in India from nursing in public, the environment is rather hostile and far from encouraging. In the United Arab Emirates, a law passed in 2014 makes it mandatory for women to nurse their children until 2 years of age, unless there is a medical condition, which doesn’t permit it. The law also requires that all government offices must provide a nursery so working mothers can breastfeed.

In Sao Paulo, any organisation that prohibits or discriminates breastfeeding is liable to be fined. In Argentina, a nursing mother is entitled to two breastfeeding breaks in a day at her workplace, each for a duration of thirty minutes until the child’s first birthday, according to the International Labour Organization.

Here’s what we can do to make breastfeeding a normal and smooth process:
1. Ensure women are provided with a well-maintained room at the workplace to nurse, pump, and store.
2. Do not frown upon women who are breastfeeding in public. Support them.
3. Ensure we do not direct women to restrooms to feed their baby.
4. Demand that all public areas like airports, malls, railway/bus stations etc. have a room dedicated to nursing mothers.
5. Push for making breastfeeding in the public normal and legal.

You may also like: MY VIEW: The Urgent Need for Dispelling Misinformation around Breastfeeding to Help New Moms

As of today, all the major airports in India provide lactating mothers with a space where they can nurse. Malls, and especially stores dealing in infant, child, and mother products also provide rooms for nursing mothers. Siddhivinayak temple in Mumbai also has a designated space for nursing.

‘DoodhKaKarz’, is an initiative started by a private hospital in Gurgaon, which urges the government to build breastfeeding rooms in public spaces. Click here to sign this online petition.

There is a powerful scene in the epic historical film Baahubali, where a central character, Sivagami (Ramya Krishnan), sits on a throne and feeds both her babies – while addressing her entire council of ministers. Not just compelling to watch, but inspiring too. Let’s pledge our support to mothers who need to nurse their children in public. Let’s make it a better world.