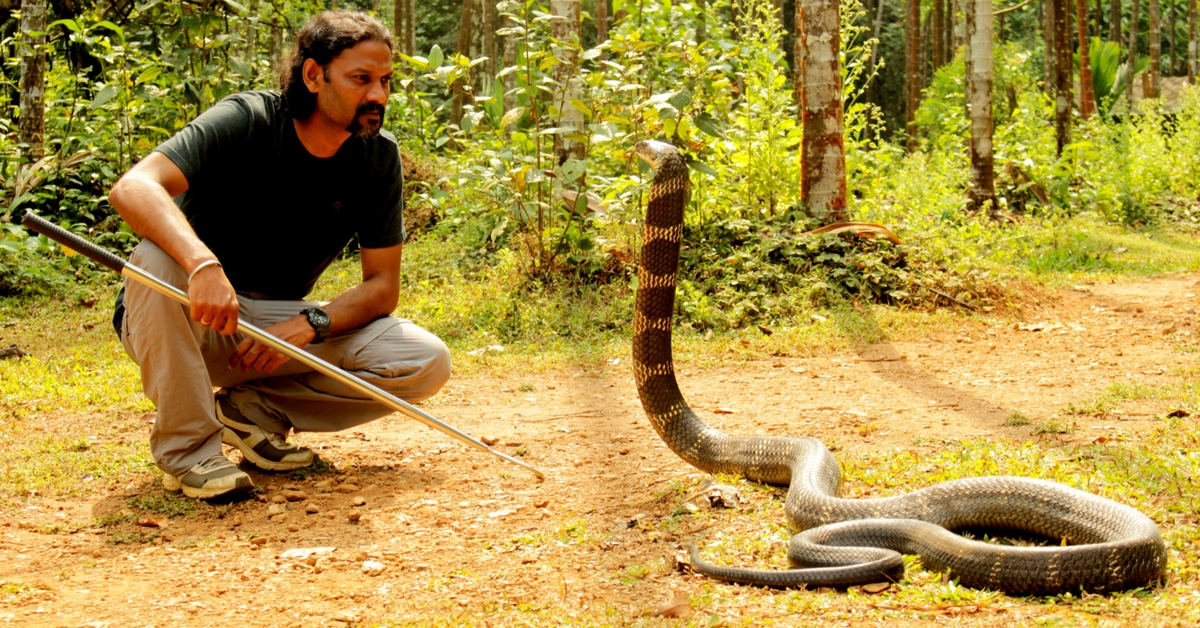 Kalinga Centre for Rainforest Ecology or KCRE, was founded in 2012 by P. Gowri Shankar, a herpetologist, along with his wife Sharmila, who made Agumbe their home to document and better understand the the king of snakes.

Nestled in the heart of the Western Ghats, the rainforests of Agumbe are a mystical place. Also known as the Cherrapunji of the south, this tropical evergreen rainforest is home to one of the most diverse range of animal species in the country.

Although it’s tough to single out just one animal in this impressive assortment of species, these forests are home to an abundance of one of the world’s most majestic creatures – The King Cobra.

Agumbe is said to house the largest number of these snakes in the country, which aptly sums up why it is called King Cobra Capital.

But what is largely unknown is that they are incredibly shy, avoiding humans at all cost, and only turning fiercely aggressive when cornered.

While herpetologists and animal welfare organisations have worked hard to fight the myths that slither around this beautiful beast, their voices often fall on deaf ears. However, there are cases where good work gets the response it deserves, and its success is reassuring to witness.

One such organisation is the Kalinga Centre for Rainforest Ecology (KCRE), located in the tiny village of Guddukere in Agumbe, which actively advocates conservation and educates people about snake ecology.

KCRE was founded in 2012 by P. Gowri Shankar, a herpetologist, along with his wife Sharmila, who made Agumbe their home to document and better understand the the king of snakes.

“Our workshops and camps are for people from all walks of life including children, not just to learn the scientific tools of conservation, but also to empower them with the right knowledge and attitude for effective conservation”, Gowri says.

Interestingly, Kalinga is Kannada colloquialism for King Cobra, which seemed a befitting term to name the organisation. It is staffed with a dedicated team, whose expertise complement Gowri’s.

One of the initial struggles was being accepted by the local population of Agumbe. “Interacting with people and explaining the necessity of conserving the species took time. But after watching the snakes being successfully rescued without the need to harm or kill them, people started understanding the nature of our cause and have been a great support”, he remembers.

Unlike snake demonstrations and wildlife sighting treks, KCRE’s programmes take participants on what is more of an educational experience.

“While adventure groups that take you on a 10-12 km trails, our agenda is to educate them about the trail they’re taken on. The opportunity presents itself as our centre is located deep within the rainforest, where people get to experience and learn extensively about the biodiversity in the region. This includes being part of live rescue operations of the king and our conservation efforts ”, Gowri explains.

While the workshops comprise of activities that lead to further academic learning for prospective conservationists, the camps encourage all kinds of nature enthusiasts including weekend travellers and photographers.

One of the flagship programmes of KCRE is the ‘Scientific Training On Reptile Management’, or STORM as it’s called, which has attracted over 500 participants from across the globe.

While a large portion of the funds generated through workshops and camps goes in the general upkeep of the centre, a portion of the money finds its way to the coffers of the Kalinga Foundation, a parallel non-government organisation of KCRE.

“Many students, after finishing their BSc or MSc, head to our institute for field study. Often, they find themselves financially constrained for their projects. This is where our foundation walks in and offers assistance for them to continue their research”, Gowri says.

With almost 20 years of expertise in the field, which include his instrumental role in pioneering a radio telemetry study on King Cobras, Gowri presently divides his time between his PhD on ‘genetic variation of king cobras in south east Asia’, and the centre.

“Thankfully, I have a very efficient team that has been able to conduct workshops and camps without any lag. Some of our older interns still volunteer and conduct the programmes”, he proudly adds.

The organisation has rescued and relocated more than thousands of King Cobras over the years.

Through the awareness that KCRE has raised, it has been able to gain the trust of the local population, who now approach them for rescue operations, instead of killing the snakes.

The Kalinga Foundation offers internships to folks driven by an urgent need to partake in environmental conservation, and a willingness to commit long-term.