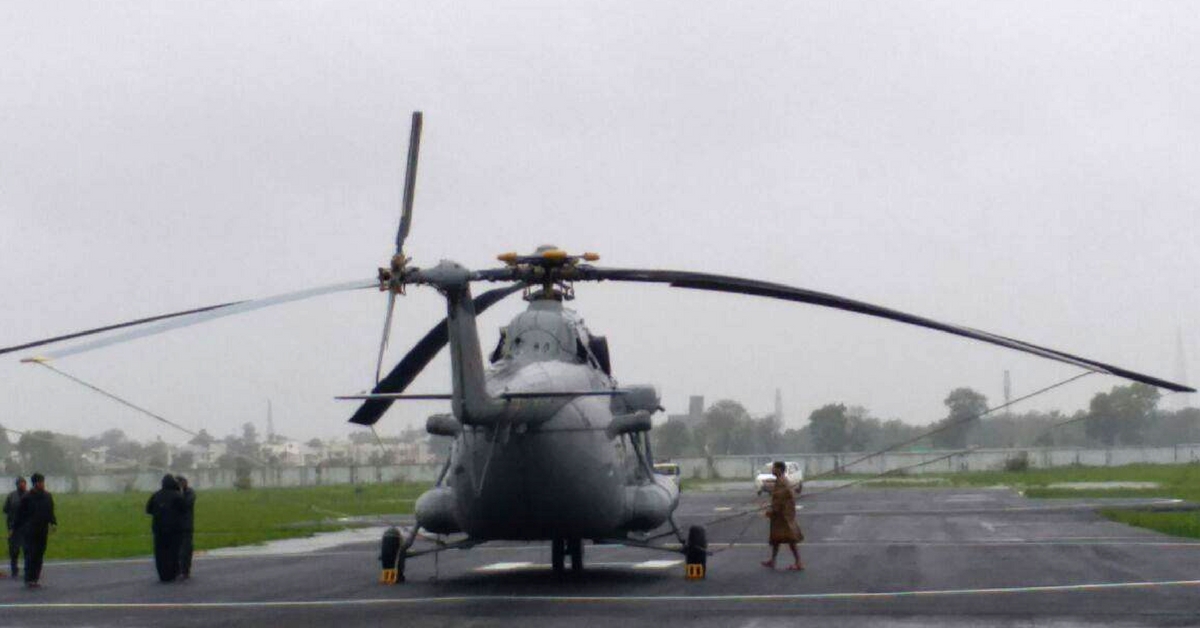 5 IAF helicopters pressed into service for rescue and relief operation in flood-hit areas of Rajasthan and Gujarat. Source: Facebook.

Stranded at Nana Matra village in Rajkot district that had been cut off from rest of the district due to floods, the helicopter was dispatched for airlifting both the women immediately after the message was received.

The flood situation in North Gujarat and Saurashtra has escalated following the heavy rains that led the Sabarmati river to overflow.

Affecting several districts in the north and central parts of Gujarat like Banaskantha, Sabarkantha, Anand, Patan and Valsad, nearly 25,000 people have been evacuated safely under the massive aerial relief and rescue operations that are being undertaken by the defence forces.

However, it is the story of two women in critical condition who were evacuated to safety by Indian Air Force personnel that will make your day.

Two pregnant women were stranded in the village of Nana Matra in Vinchia tehsil of Rajkot district that had been cut off from rest of the district due to heavy rains on Sunday.

According to the statement by defence spokesperson Abhishek Matiman, in a press release, a Chetak helicopter was rushed to action from the airbase in Jamnagar as soon as they received a message about the women at around 4.30 pm.

In the meantime, the district officials were alerted that one of the women had given birth to twins and required to be airlifted right away.

You may also like: Watch How the IAF Airlifted a Pregnant Woman & Her Child from a Flooded Chennai Area

“By 17:15 hours, the Chetak was already overhead looking for a safe patch to land. The mother, with her newborn twins and an attendant were instantaneously put into the aircraft and flown out to safety. The aircraft landed at Jasdan helipad where they were handed over to the medical team already waiting,” the release said.

After the young mother and her babies were taken to safety, the helicopter made another sortie back to Nana Matra, where the second woman was located.

The situation by then had worsened with her bleeding profusely. “She was flown across the river and handed over to a medical team that was waiting for her with an ambulance,” it added.

The brave air warriors’ immediate action saved both the women and their babies in the nick of time!