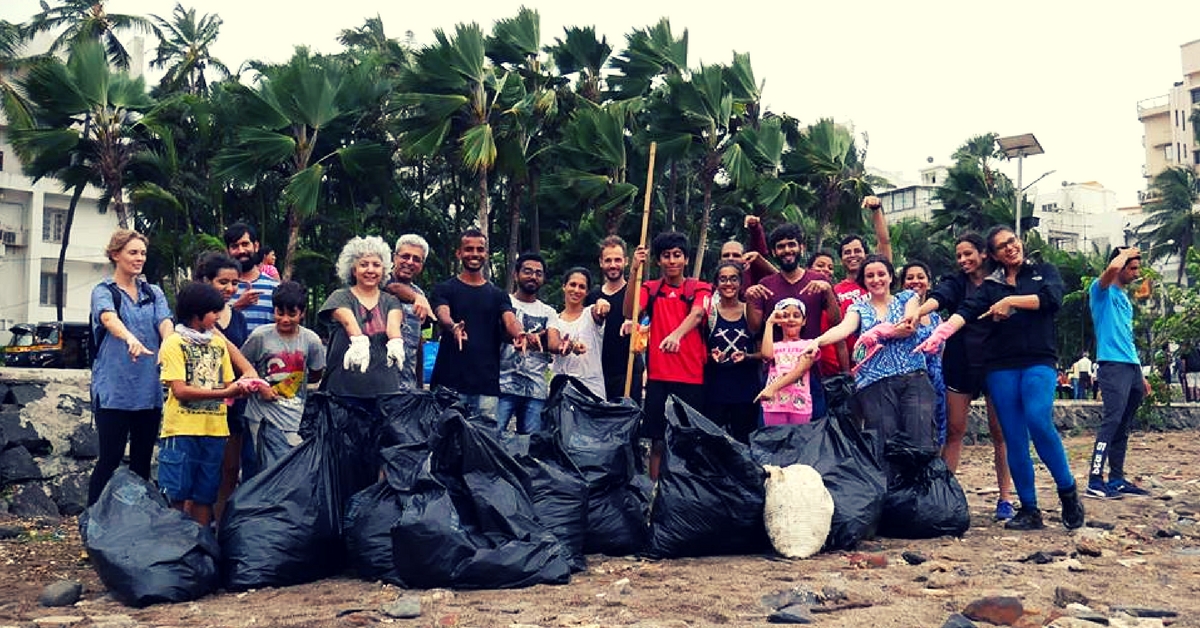 An online initiative that began in May aimed at clearing Mumbai’s Carter Road of trash is gaining momentum as a weekly clean-up drive, and it’s calling for local resident’s to join in.

It all started in May. A Mumbai resident was so fed up with Bandra’s Carter Road promenade being littered with plastic bottles, plastic bags and discarded food packaging that she went out and started cleaning it herself.

At first, she made a Facebook page ‘Carter Road Clean-Up’ and invited others to join her for just a few hours every Saturday, but a few weeks later, a mini-movement of like-minded individuals had begun.

Anya Rangaswami, a graphic designer and the woman behind this movement, moved from Pune to Bandra three years ago. “The trash on the promenade, the rocks and the plastic knotted around the mangroves has been bothering me for a long time,” she told Homegrown, adding, “So, one evening, when I was on Carter Road for a run, I decided I was going to start cleaning the place.”

And that’s exactly what she did.

You may also like: Mumbaikars Come Together to Clean up 20,000kg Trash From City’s Beloved Mangroves

She thought that if the trash bothered her, it probably did others too. So, after consulting with friends and others in the neighbourhood, she created a Facebook page and invited others to join her. She reached out to her local residential association and the committee in charge of managing the Carter Road area, Bandra West Residents’ Association (BWRA), who were quick to respond and offered their support in her endeavour. They helped her connect with a member of the Solid Waste Management division of the Brihanmumbai Municipal Corporation (BMC).

“The initiative was started by Anya. We are ready to support the group financially if they need it,” Daryl D’monte of BWRA told Hindustan Times.

The Facebook page quickly attracted the attention of other local residents and the growing group now meets every Saturday from 10am to 12pm, although due to heavy monsoon rains they’ve had to cancel one meet-up.

You may also like: These Ordinary Indians Fighting Climate Change in Their Own Little Ways Put World Leaders Like Trump to Shame

Using disposable black bags provided by the BMC, they clear up as much trash as they can within the designated hours. The group segregates the garbage as they go, separating dry waste and wet waste and paying particular attention to any recyclable waste they find. This recyclable dry waste is picked up by the BMC and transported to a nearby recycling centre, where the group is planning to go soon for a visit.

“Community involvement is very important. This is not someone else’s job. Since the promenade is under different governing bodies, it becomes difficult to get the work done,” Anya told Hindustan Times.

And you can join in too!

Anya and her team are keen on turning this group into a city-wide movement of environmentally conscious and mobilised citizens, committed to actively making Mumbai a cleaner, more pleasant city to live in. Apart from the Facebook page, Anya also created a WhatsApp group, which provides up-to-date information and progress reports about the weekly clean-up drives.

Mumbai’s Carter Road Promenade is a 1.25km-long walkway along the sea on the west side of Bandra that opened up for the public in January 2002. Since, it’s become a popular hangout spot with locals and tourists alike, featuring a Bandstand Promenade, a jogging track, a park and also a lovers’ point.