Adopted as a Child, This Man Now Runs an NGO to Meet the Emotional Needs of Underprivileged Kids 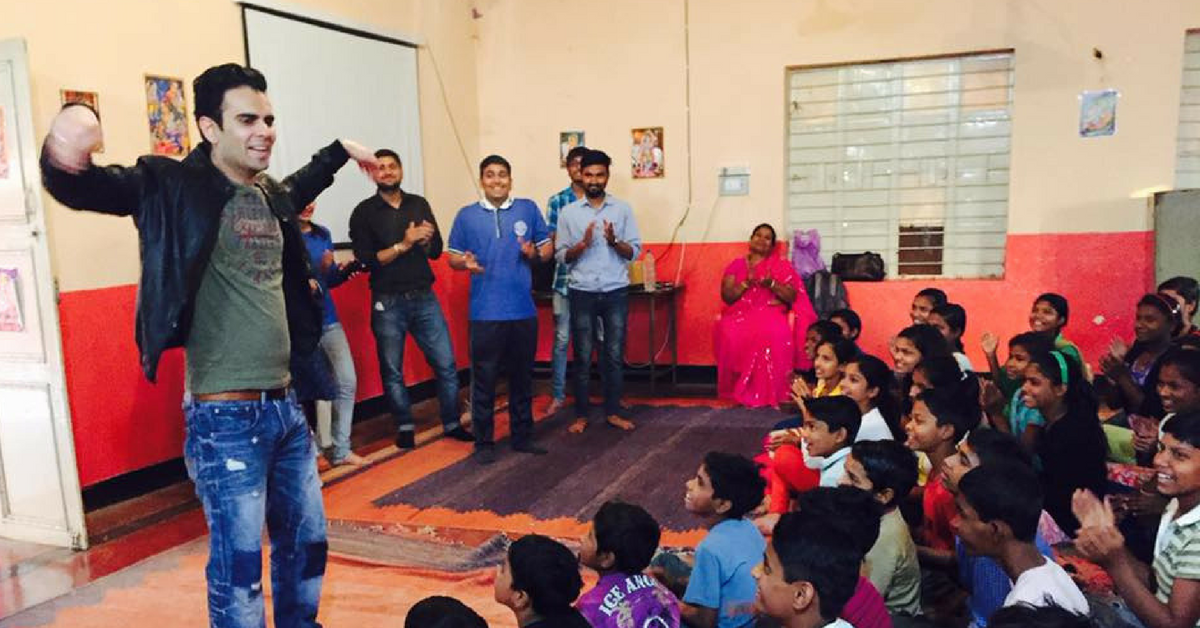 “While I was provided with all material comforts I did miss the love and support.”

‘Muskaan’ is the name of the organisation that Abhisekh Dubey founded in 2014 in his home-town Gwalior. What started with Abhisekh and a few of his friends today has more than 250 volunteers and have established five centers over three cities (Bhopal, Gwalior, and Indore), bringing smiles to hundreds of vulnerable children in these cities.

Born into a middle class household, Abhisekh was adopted at 5 by his uncle and aunt who did not have a son. He grew up in a loving, caring family, but deep inside there was always a little niggling thought. “While I was provided with all material comforts I did miss the love and support,” he says.

It was perhaps the vacuum that Abhisekh felt growing up, that made him empathetic to the emotional needs of the underprivileged children that he would find in the streets near his home. It was these interactions and the satisfaction he got out of helping them that planted the seeds of Muskaan in him. Abhisekh says that the plan was never to teach the children.

“Since I realised how important it is to find support and someone to talk to, I wanted to create a platform where the children could be comfortable to speak to us and share whatever they wanted to.”

“I was in my second year of college when I started spending time with the children around my residence. Initially it was very difficult to get through to them and it was a happy meal we shared with them that helped break the ice,” he says.

As Abhisekh and his group of friends spent time with the children, the children started asking them to teach them. “All the children were from local government schools and wanted help in their school work. We started with taking classes five days a week and saw tremendous improvement and enthusiasm from the children to learn.” This was all the motivation that Abhisekh needed to formalise this arrangement and take it forward. Muskaan formally started to offer lessons for school children to help them academically improve.

In Abhisekh’s analysis, one of the key drawbacks of our current education system is the language of instruction. Currently, until grade five the medium of instruction is Hindi, post which they suddenly switch to English. This sudden disruption is too much to take for most children, and causes a high level of dropouts.

The lack of adequate exposure to English in the lower grades hampers their ability to learn in English.

“Imagine studying in Japanese and then suddenly being asked to switch over to Chinese. How would you cope with it?” he asks. Those who continue to be taught in Hindi also face challenges once they start college, since the medium of instruction and language for conversation is English. They also find it difficult to face job interviews and are diffident about their abilities. “This language barrier needs to be seriously addressed if we wish to make any headway.”

It was not all-smooth sailing for Abhisekh though. Recounting the initial days, he says, “A year after starting Muskaan my father, who was a government employee, gave me an ultimatum and asked me to chose between Muskaan and him. He was of the opinion that like him I must also get a government job and have a stable income.” This was perhaps one of the most trying times for Abhisekh but it was his conviction that helped him stay focussed. “I knew that the anger that my father was harbouring was temporary and he would eventually see the good work I am putting in,” he says.

Providing these children with a sound educational background and being there to emotionally support them is perhaps the biggest contribution that Abhisekh and his friends are doing. According to a report by UNICEF, India is home to the largest children population in the world – 400 million children, a number which includes an estimated 31 million orphans. “While working with orphaned children we realised that while government provides them with shelter homes, what is missing is an emotional connect, and a mentor to help nurture the child. Attaining the age of 18 would mean that the child is asked to leave the shelter home, and it is at this age when he leaves the security of the shelter is he most vulnerable to fall into bad influences. We believe that it is essential to focus on the emotional well-being of the child and the age is merely a number,” says Abhisekh.

Children who leave shelter homes at the vulnerable age of 18 are more susceptible to indulging in crimes and drug addiction. At Muskaan the aim is to ease these children into the mainstream workforce in a gradual and comfortable manner.

Get in touch with Muskaan here: president.muskaan@gmail.com