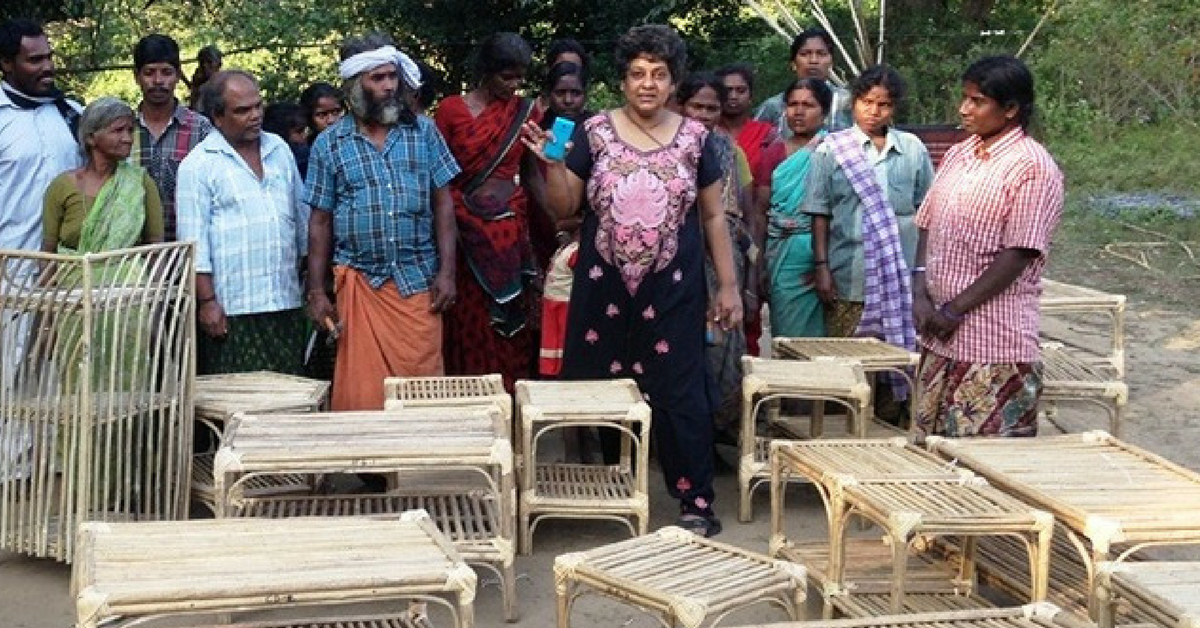 In this project, the tribal community is involved in the mechanical control of lantana by manually cutting, and at the same time, they are trained in making low- cost furniture, handicraft, toys and other utility articles using lantana wood.

It was the year 2000 when Maya Mahajan, a PhD scholar from Coimbatore, was researching on the impact of invasive alien weeds on native flora and ecology in various forest types in the Nilgiri biosphere reserve, including Siruvani hills, Mudumalai, Silent valley and Upper Bhavani.

During her research, Maya came to know about lantana camara -, an exotic weed of South American origin – which was invading different forest areas and posing a serious threat to the native vegetation in Western Ghats, including Siruvani area in Coimbatore.

Getting rid of the lantana weed was a little tricky as the use of chemicals to remove the shrub could affect the native species of plants too, and mechanical methods of removal are too expensive. For years, Maya would think about a possible solution to remove these plants as well as helping the local community in Siruvani. As lantana looks exactly like bamboo but was more durable than it, Maya got the idea of making furniture out of it. However, she never had the right support and financial backing.

It was when she joined as an associate professor at the Centre for Sustainable Future at Amrita University, Coimbatore, that she wrote a project report about how lantana can be used to make furniture and help the local tribal community with some extra income.

It took her almost four years to get approval from the funding agency, but finally the project was fully funded and Maya’s idea started to take shape in 2015.

The first and foremost challenge to start the project was to convince the tribal community to get the lantana weeds from the forest as elephant attacks were very common in the area. It was only when V Vellachi, a resident of Singampathy, along with seven other women volunteered for training, that others followed suit.

“We roped in ATREE, a Bengaluru based organisation, to train villagers in furniture- making. Around 40 residents of the three villages were trained in a three-month training programme beginning December 2015. The project was funded by the department of science and technology,” informs Maya.

In this project, the tribal community is involved in the mechanical control of lantana by manually cutting, and at the same time, they are trained in making low- cost furniture, handicraft, toys and other utility articles using lantana wood. Thus, a generation of sustainable livelihood options for tribals and forest conservation is achieved at the same time.

Making furniture out of lantana is quite different from the usual way furniture is made. After the shrub is chopped off, its wood is treated in boiling water to make it flexible. The bark is removed and the log is sliced into sticks before it is assembled into furniture pieces.

The furniture looks exactly like the bamboo or cane furniture, but is more durable. The cost of lantana furniture is also much lesser than bamboo furniture as the raw material is available for free. “Not only is it cheap and durable, it will also help conserve bamboo and cane trees, which otherwise are cut down to make furniture,” says Maya.

Seventy tribals in Singampathy, Sarkarporathy and Kalkotipathy hamlets were provided training in lantana furniture-making for 45 days each in the past one year. The training will be also provided to tribals in other three hamlets during the next two years.

Assistance was provided to the communities in marketing the products in potential areas  in India. Market linkages were being established in Coimbatore and other major cities in India with the help of Tribal Cooperative Marketing Development Federation of India (TRIFED).

Even though the business is still in its primitive stage, villagers have so far sold furniture worth Rs 1,70,000, and have orders worth Rs 70,000 pending with them. “Everyone was skeptical about the idea in the beginning. Once the products were ready after so much effort from the villagers, I was worried about the marketing. But one year down the line we have advance orders and now we are worried about how we will finish the orders,” laughs Maya.

During her project, Maya also noticed that the tribals of Sadivayal, Singampathy and Sarkarporathy hamlets that are located in the pristine forests of Siruvani hills of the Western Ghats, were reluctant to do agriculture due to frequent elephant raids and water scarcity. Few of them, especially in Sadivayal village, had started using chemical fertilizers influenced b external agencies. By reviewing the overall situation with the help of a team from Amrita University, she decided to promote crops that don’t attract elephants and introduced organic farming methods in these villages.

Awareness programs were conducted in all the three villages about the importance of organic farming and the ill effects of chemical pesticides and fertilizers on land, environment and health. Several training programs  on the actual process of organic farming were conducted, followed by on- field training/implementation programs. Organic crops such as turmeric, chilly, cow peas, ground nut, black gram, tomatoes, ladies finger and rice were cultivated in a total of 45 acres of land.

Farmers were trained in making Panchgavya, Jeevamritam, and the land was prepared using cow dung, green mulching and goat manure. Farmers were also trained on bio-insecticides using leaves and cow urine. There were many people who pointed out that converting to organic was not that easy and initially the farmers may have to face losses. But Maya was determined to do this.

“It was a huge responsibility on me. Even the farmers were not sure, but I asked them to just trust me. I told them that I was  going to pay whatever loss there was, from my own pocket. But when the crop was ready, everyone was overjoyed – especially me. The yield was almost double, and moreover, it was organic, so the farmers got a better price than before. This was one of the best moments of my life,” says Maya.

At the end of the year, 45 tonnes of organic rice and 5 tonnes of turmeric were produced and were sold at a premium price in the market. The farmers made double the profit compared to the previous year.