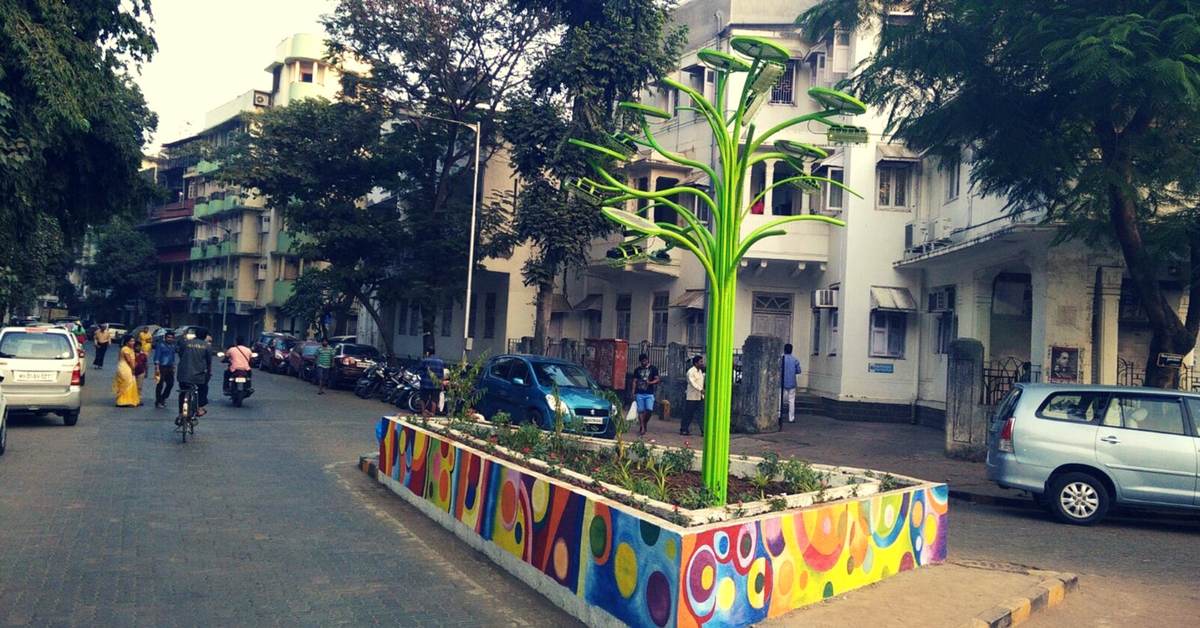 Ever used a toilet made of glass bottles, recycled milk and juice cartons? Or danced at an eco-friendly EDM festival?

This Mumbai-based innovative startup, with its motto of ‘greening the impossible,’ is doing it all!

“Our first gig was at music and dance festival Sunburn where we made an ecopod for Woodland shoes. We have been working with government bodies ever since, towards a greener and cleaner India, a day at a time,” says Abhijeet.

The APRO Surya tree installation at Dadar, Mumbai, is credited to be one their most successful projects. These solar trees have been installed in 12 locations across Mumbai. The plan for installations in 20 more locations are underway in various stages.

Solar Power has a huge potential to make a major impact on the electricity requirement, believes Abhijeet.

“The tree at Dadar was one of our first solar tree installations. The solar cells or photovoltaic (PV) cells used in the Apro Surya Tree convert sunlight directly into electricity. These can be used to illuminate our surroundings, save electricity and cause less pollution. They emit less amount of heat when compared to conventional lighting sources like bulbs,” he says.

Named the Surya Selfie Tree, Abhijeet wants people who come across the installation, to click selfies while promoting the eco-friendly venture.

Read more: This Lecturer Quit His Job to Become a ‘Plant Doctor’ & Help Farmers in Distress

Apro believes in bringing about cutting-edge environmental solutions from across the world and carrying out dedicated research for the same. A few of their known innovations include:

Rain water accumulated in used tyres become mosquito-breeding grounds in monsoons. An environment friendly disposal of these used tyres & plastic waste is another problem. In an innovative solution to the issue, Abhijeet came forward to help the M.C.G.M.

“We came up with the idea of making roads and filling up potholes with waste rubber and plastic. Around 1,000 tyres were collected and sent for recycling. The resulting rubberized asphalt mix prepared, was used to repair potholes at Padmabai Thakkar road in Dadar (W). This saved over 40 tonnes of carbon dioxide from being released into the atmosphere,” he says.

Another idea for sustainable low-cost housing, included the use of plastic water bottles littering roads, canals, gutters, rivers and oceans, and asking people to live inside the structures built from them.

“Sustainable Sanitation” urinals in public spaces is one of their prime areas of focus. Their specialised “SUSLOO” toilets are one their kind. They are constructed using APRO’s patented ‘Bottle Brick innovation’ (plastic and glass bottles) & recycled milk and juice cartons and avoid the use of natural wood.

The production and use of cement, generates too much CO2 the most of any man-made material.
To use a more sustainable alternative, they innovated Apro Hemtech that uses hempcrete, which replaces concrete.

Hempcrete is a biocomposite made of the inner woody core of the hemp plant. This property is unique to hemp among all natural fibers. The result is a lightweight cement-like insulating material, weighing about a seventh or eighth of the weight of concrete. Fully cured hempcrete blocks can float in a bucket of water.

“It is not used as a structural element, but only as an insulating infill between the frame members to reduce racking. Hempcrete is carbon-negative. The hemp plant absorbs carbon as it grows. The lime used in the production absorbs even more CO2. The result is a material that consumes more carbon than it produces,” shares Abhijeet.

The additional benefits of using hempcrete include: It does not support termites and is recyclable.

“When the house is demolished the material can be ground up and spread on farmer’s fields. Concrete cannot do that,” he adds.

You may also like: How the Will of the People From Kerala Brought a 9-Km-Long Dead River to Life

One of the biggest challenges for Abhijeet and his team has been underlining the importance of these environmental initiatives. “Sustainable solutions are of long term importance and require a certain amount of effort to carry out. Convincing people about these initiatives has been the biggest problem to surmount,” he says.

He praises the government support for their projects saying, “We have often had to work in conjunction with AMCs and govt officials to carry out our project and we have had support on every step of the way.”

Any entrepreneurial venture requires effort and sheer hard work, especially in its initial stages. “We worked hard to create, pitch and implement these sustainable solutions, and to create a network of people with similar vision and ideas to help us out. It is this hard work that has enabled us to carry out various innovations. We persevered in the initial stages and that perseverance has paid off,” says Abhijeet.