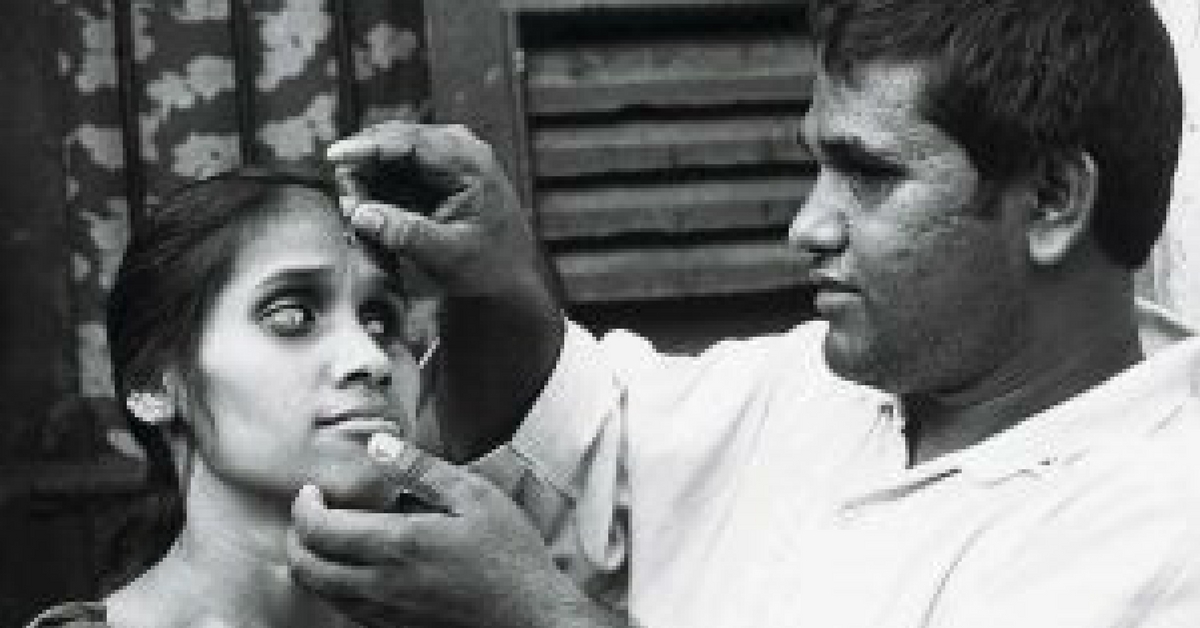 Through a series of photo feature stories of surviving individuals who have excelled at pursuing their interest—Shipra Das, a seasoned photojournalist gives a realistic portrayal of the differently-abled.

Our eyes are the most crucial and delicate sensory organs. It is really disappointing to acknowledge the fact that India is the country with the highest number of people suffering from visual impairment. Promoting eye care in India is of paramount importance. If we can take necessary measures in restricting complete blindness, it will definitely improve the employability of partially visually impaired persons.  According to WHO, 80% of all types of visual impairment can be prevented or cured if we aim at taking proper and necessary medical attention.

In an image from ‘The Light Within’, a middle-aged woman, Preeti Monga, standing on a chair, puts up a frame on the wall of her apartment, the interiors of which she have been designed all by herself. The frame reads ‘Love is God, God is Love’. She does this with a broad smile on her face. This exceptionally driven Public Relations Executive has lost her eyesight ever since the age of 6.

Through a series of photo feature stories of surviving individuals who have excelled at pursuing their interest—Shipra Das, a seasoned photojournalist gives a realistic portrayal of the differently-abled people in her book, The Light Within: A Different Vision of Life.

There are several other differently-abled people who have shown tremendous perseverance in their lives.

This 13-year-old was abandoned at Sealdah railway station many years ago. He still has faint memories of his parents and has no idea of his parents’ whereabouts.  Sumit recalls—at the age of age of three, while playing football, the spokes of a bicycle wheel had pierced his eye. He went completely blind within 2 years. He suspects that his father had come from Bihar and had left him at the Sealdah station. He was rescued and sent to the rehabilitation center of Missionaries of Charity.

In the photo, he enjoys the company of his friend at Puri sea beach.

Sightless since birth, the spirited girl from Amravati, Maharashtra, has surmounted many obstacles in life to become an international swimmer. She dreams of crossing the English Channel someday.  In 2001, she became the first-ever visually impaired swimmer to take part in a state-level competition in which she attained the fourth position. Kanchanmala attributes her success to the constant guidance and encouragement that she has received from her father, Dhyaneshwar Pande, a sportsman himself. Her father encouraged her to excel in swimming and thus strengthened her inner spirit.  She has also earned glory for herself in Commonwealth games and at other important events held in different countries. Kanmchanmala is here to embrace all challenges that life has on offer for her.

The lives of Jharna and her husband, Shamin Akhtar revolve around theatre.  The happily married, visually impaired couple never misses a day of rehearsal. A founder member of the Blind Opera, Kolkata, Jharna is congenitally sightless whereas Shamin, a talented comedian and singer lost his eyesight at the age of three. It was theatre that brought them together. Jharna comes from a Hindu Brahmin family while Shamin is a Muslim boy. They got married in a Shiv Mandir where they faced strong opposition from both the families due to their religious differences. Ashok Pramanik, the head of Blind Opera, facilitated their wedding.  Theatre has given them the opportunity to express their sense of identity and has also guarded their honor and dignity.

Sightless by birth, Nemai was brought up by an uncle along with his little sister. This uncle usurped his share of the family’s agricultural land and left him in a state of destitution. Since Nemai is visually impaired, his uncle argued that it is best for him to make his living by begging. Obviously this portrays the uncle’s lack of education and good will in bringing up and helping a visually impaired individual earn his living and live a respectful life. But his loving sister filched the land documents from her uncle’s house and handed them over to her brother. The furious uncle took the matter to the village panchayat.

The night before Nemai was to prove to the panchayat that he was the rightful owner, his uncle tried to kill Nemai by setting his hut on fire. Luckily, he escaped the hut as he was forewarned by a well-wisher. Nine years later, today, he cultivates his own land and produces enough to stand on his own feet.

A 52-year-old welder in Ludhiana, Punjab, Sukhdev Singh lost 80 percent of his eyesight in a road accident. The man who has been Sukhdev’s employer swears by his efficiency– “As far as I am concerned, there is no real difference between the blind and the sighted,” he asserts. Sukhdev on his part is a stickler for perfection. “I try my best to overcome my disability. Give me any work and I am up to it. I can do justice to it,” he says. Today Sukhdev leads a normal life with his wife and three children.

“Drawing some of them out of their shells is not always easy. Patience is the key. You have to spend hours and days with them to earn their trust, establish psychological rapport. But once that is done, it is a sheer delight to communicate with them”, writes the photojournalist. Dedicated to the visually impaired, Das completed her dream of compiling this illustrated- a result of her decade long effort. President Pranab Mukherjee was presented with the first copy of the book at Rashtrapati Bhawan. Sipra Das was congratulated by the President for her sensitive depiction of some outstanding members of the society who, though sightless, have been able to achieve amazing victories in their personal lives. Full of inspirational experiences this book is an effort to motivate those with similar challenges as well as the ones who would like to reach out to help people like them. The visually impaired people fight many battles on a day-to-day basis. We must sensitise ourselves towards their needs. Reducing social isolation and helping them function independently will go a long way in making their lives easier. In Gulzar’s words, ‘They are all surrounded by darkness outside but they all have a light within.’

There are some institutions which have been working tirelessly in helping them to move forward in their lives. They are as follows:

Spread the word and sensitise the world. The book is available at http://amzn.to/2tDFifC and all major retail outlets across India.