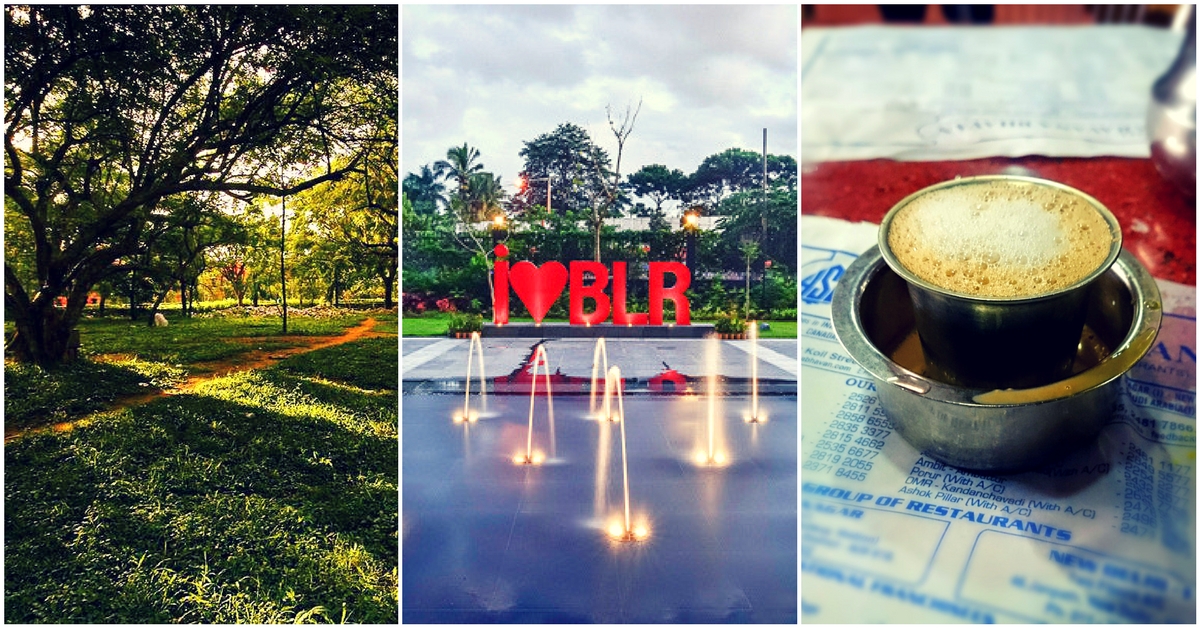 We all are emotionally attached to a city we grow up in. Be it a small village or a big metro city, our home town always remains close to our heart. And then there comes a place which embraces one and all; the expats, migrants, people from other cities and of course those who belong here.

When I first moved to Bangalore, I was lost. Literally! it took me at least 30 minutes to get out of Cubbon Park. The traffic, autowalas and long distances, I hated it all and couldn’t wait to go back to my city. But just in two years, the city has become a close part of my life. The first lunch at MTR and shopping at commercial street. From “Kannada gothilla” (I don’t know Kannada) to “nanu Kannada kalita-iddini” (I can speak Kannada), I have traveled a long way!

From a long walk in Cubbon Park to hundreds of cafes, from trails of trees everywhere to the amazing weather, you can’t help falling in love with the city. So, here is the list of 15 things that we all absolutely love about Bangalore-

1. The huge lung spaces – you have not seen it all if you are out of Cubbon Park in an hour

If we are talking about The Garden City then it is impossible to skip the huge lung spaces like Cubbon Park spread across 100 acres of area with various species of plants and trees.

Lalbagh! Have you been to the flower show? It houses India’s largest collection of tropical plants.

Bannerghatta National Park – this 25,000 acre park is one of the biggest tourist attractions in Bangalore.

No matter where you live, you will always be close to nature!

2. The incredible bus service – Yes, Majestic is not a mall but it still gets huge footfalls!

BMTC buses carry 43 lakh passengers every day. The Volvo is all you need to travel in a hot summer day and Vayu Vajra will make sure you never miss a flight! (To know more about bus schedules, visit their website: mybmtc.com)

Well, you have to go and experience that yourself!

4. A lot happens over a cup of coffee or filter kaapi

Bangalore is no doubt the birthplace of Coffee Days. With at least one CCD at every corner of the street, you will never have to look for hangout places in Bangalore.

But it is still the wafting aroma of piping hot filter kaapi that drives us crazy. And nothing can beat the value of the “by2” coffee, where you get almost 2 cups for the price of 1! Hatti Kaapi offers a hot cup of South indian coffee at just Rs. 8

Karnataka has always been rich when it comes to dance and music. Most of the girlsknow at least one dance form since their childhood.

Visit Nrityagram Dance Village for a never seen before experience. Set up by Protima Bedi, this place is a different world of its own. The residential school offers training in Indian classical dance forms – including Odissi, Mohiniattam, Kathak, Bharatnatyam, Kuchipudi, Kathakali and Manipuri.

6. One of those few cities to keep theater alive

Yes, we are talking about Ranga Shankara. It promotes theater in all languages. The stage has seen over 2,700 performances so far.

But that’s not the only venue for catching a live performance. There are also Jagruti Theatre, Chowdiah Memorial Hall, Ravindra Kala Kshetra, etc.

Bangalore has a huge inclination towards organic living. With organic hang out joints like The Yoga House and Carrot’s Healthy Kitchen, and organic shopping options ranging from clothes to food and cosmetics, Bangalore knows its way to healthy living.

This probably would be the first thing you’ll notice as you walk around on the streets of Bangalore. The beautiful wall paintings give a small insight on the rich heritage and culture of Bangalore along with providing employment to various artists.

9. A walk down Brigade Road will let you know how inclusive the city is

From a young crowd of students from north India to a group of foreigners who are working here for a couple of years now. From west to north east Indians, Bangalore has a place for all.

Bangalore is truly cosmopolitan with around 48% Kannadigas, 25% Tamilians, 14% Telugites, 10% Keralites, 8% Europeans, and 6% a mixture of all races. (Source)

10. We value our public spaces and make sure they look good

An example is the MG Road Boulevard, which is the lifeline of the road. With play zones for children, snake and ladders game and over 1,000 saplings of various kinds, the boulevard will capture your hearts.

11. Ancient monuments right under your nose

In addition to this, there is Tipu Sultan’s summer palace, the old fort at Devanahalli, a couple of pre-historic sites at Chikkajala, Hejjala and Savanadurga, the Bangalore Palace, etc.

12. Women feel safer here than in most other cities in India

I can go out for dinner with my girlfriends at any time without having a constant fear of being raped unlike some other cities. With women opting for unconventional careers like bus conductors and even drivers, Bangalore is much more advanced when it comes to women empowerment.

Besides being the birthplace of most IT giants like Infosys, Wipro, TCS, etc, Bangalore is also a hub of new and exciting startups like Flipkart, InMobi, Myntra, etc. You see people sitting around anywhere and everywhere passionately discussing new ideas. Maybe that’s why there are so many cafes!

Every 2 years, Bangaloreans are treated to a visual spectacle as a host of combat and civilian aircrafts from around the world showcase their prowess in the skies. Held at the Yelahanka Air Force Base, don’t miss the next one in 2015!

15. We work hard and party harder

Did you know Bangalore has the highest number of Pubs in Asia? (Source) Yes, they used to close at 11pm sometime back, but now they’re open till 1am! So 3 cheers to the weekends!

16. And in the morning, we flock to the hole-in-the-wall eating joints which are legendary

Who hasn’t relished the softest idlis, the heavenly upma and delectable kesari bath at Brahmin’s cafe, Veena Stores, Janatha hotel, etc? Or walked down eat street (VV Puram) for some of the season’s best fare.

17. Stating the obvious- weather, of course!

Don’t even get me started with that. When the rest of the country is trying to figure out ways to escape from the brutal heat, Bangaloreans are busy enjoying a walk in the drizzle and the cool weather in the night. And yes, it is the same throughout the year. Jealous enough?

This weekend, leave your houses and enjoy the beauty of the city! Do you know something awesome about Bangalore that should be included in the list? Leave your inputs in the comments below or write to us at- contact@thebetterindia.com

Also Read: Why Panjim’s Unique Vibe Makes It an Indian City Unlike Any Other!
About the Author: Born with a hobby to travel, talk, express and write, Shreya gets to do all of that and is even paid for it! Interested in rural development and social issues, she dreams of actually bringing a change in society and writing a book of her own one day. When she is not preaching others about a better India she is busy watching movies and playing video games. Follow her on twitter: @shreya08
Promotion