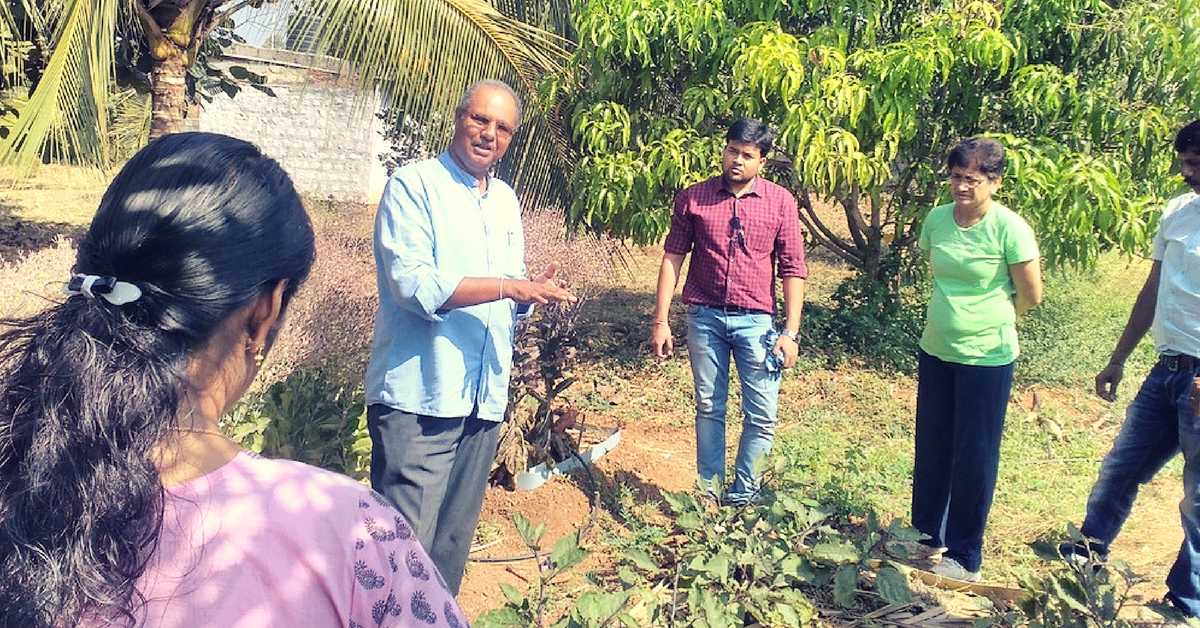 Dr. Rao started Hariyalee seeds, a “family-run farm, which curates species of endangered and heirloom seeds from all over the world” and sells them.

Purple, white and pink lady fingers, blue groundnuts, a round cucumber and more — enter Dr. Prabhakar Rao’s 2.5 acre-natural farm in Bengaluru and you’ll find a range of exotic and rare vegetables like these. Speak with him and he’ll tell you that most of these veggies are no longer found in India.

The 60-year-old holds a PhD in plant breeding and genetics and has spent several years travelling across the world, collecting native indigenous seeds of endangered vegetable species.

An architect by profession and farmer by passion, he returned to India from Dubai after his retirement in 2011.

By this time, he had about 560 varieties of endangered seeds, including Dosakai — a round cucumber the size of an apple that tastes like lemon and is found near the border areas of Andhra Pradesh and Karnataka; a purple round eggplant called Kamo, found in Japan; herbs with flowers that have the flavour of lavender and lime, found in Moldavia; and some “unbelievably” sweet chilly peppers.

Also read: These IIT Kharagpur Alumni Show How You Can Grow Organic Veggies on Your Rooftop

“Over the past 20 years, there has been a steady decline in the variety of vegetables we eat. This is because the original vegetables were of native indigenous varieties using which farmers could produce their own seeds every season,” says Dr. Rao, adding that the business model of seed companies is structured in such a way that farmers now have to come back to them every season to buy new seeds.

“They produce seeds that help them make profits. That’s why almost 90% of the vegetable varieties that we eat today are hybrid varieties. As a result, hundreds of varieties of native vegetable species become extinct every year.”

After this realisation, Dr. Rao joined an international organisation called International Seed Savers’ Exchange, while also working as an architect.

It’s a voluntary body of individuals across the world who collect and share seeds of endangered vegetable species.

Once in India, he started testing the seeds to find out how many of the them could be cultivated successfully in the Indian climate. He was able to climatically stabilize and grow 142 varieties. It was with these 142 varieties that he started Hariyalee seeds, a “family-run farm, which curates species of endangered and heirloom seeds from all over the world” and sells them.

All the vegetables and seeds available at Hariyalee are hyper-exotic and are usually not seen in the markets anymore. When he had started, Dr. Rao didn’t have enough seeds of every variety and it was difficult to procure them. So he spent the first few years multiplying them to an extent that now they can be sold to home gardeners. He has also shared some seeds with farmers.

The idea is that if enthusiastic home gardeners cultivate these seeds, the varieties will exist somewhere in the world instead of getting lost.

Anyone who buys seeds from Hariyalee needs to make just a one-time purchase because they can always produce the next generation of seeds themselves.

“If a bird or animal is endangered, the whole world focusses on it. But somehow, people don’t even know that so many varieties of vegetables are extinct. Desi indigenous varieties have a huge role to play in our lives. These varieties can handle climate change, are tolerant to drought conditions, and are naturally resistant to diseases and pests. Moreover, they are adaptable to natural farming methods. Instead of taking them and making hybrids and genetically modified organisms, it makes sense for us to go back to cultivating them,” says Dr. Rao.

Also read: This Duo Left Behind Lucrative Careers to Help You Know Your Farmers & See How Your Food Is Grown

Talking about his process of procuring these seeds, he explains that there are certain places in the world where one can still access old seeds. This is because farmers there have not started practicing the traditional, monoculture type of agriculture yet. These include places in Central Asia, South America, Indonesia, Malaysia, Southeast Asian countries, and remote parts of China.

In these places, one needs to find previous generation’s farmers who usually have seeds of unique varieties.

For example, Bangladesh used to have an eggplant variety called the Bangladeshi Long that has not been available in the markets for 15 years now. It’s a peculiar eggplant with a unique colour and shape and was widely used in Biryani preparations. “I was travelling in West Bengal and was talking to some old farmers about this variety when one of them brought a small dried piece of this brinjal that had a few seeds. Today, I have about 1,000 seeds of that variety,” says Dr. Rao.

He calls himself a part of the generation of scientists that was involved in India’s green revolution — who introduced the application of highly intensive chemical farming and told farmers to dig borewells, use urea, spray insecticides, etc.

“But somewhere deep inside me, I was not completely sure about what I was doing,” he says. We did bring green revolution, it did help bring food security in the country, but I always used to question if what we are doing is sustainable.” This motivated him to change his line of education and he went to Louisiana to study architecture.

Yet, his love for the environment followed him around. Throughout his career, he focused on sustainable architecture techniques to protect the environment.

Today, he conducts curated workshops and on his farm inviting people to come over and learn about sowing and harvesting seeds. He has a team of three people working on the farm, other than his son who returned from the US to join his initiative.

“When I came back to India, the idea was that I would retire from practice and spend time doing things that I love doing. Multiplying indigenous seeds is not really work for me. It’s my passion. After you finish your professional career, it’s very important to have a passion to keep going. I love to get up in the morning because there is always something happening in the farm. It’s exciting and gives me a lot of enthusiasm to live life,” he concludes.

Know more about Hariyalee seeds here and contact the team by writing at farmer@hariyaleeseeds.com