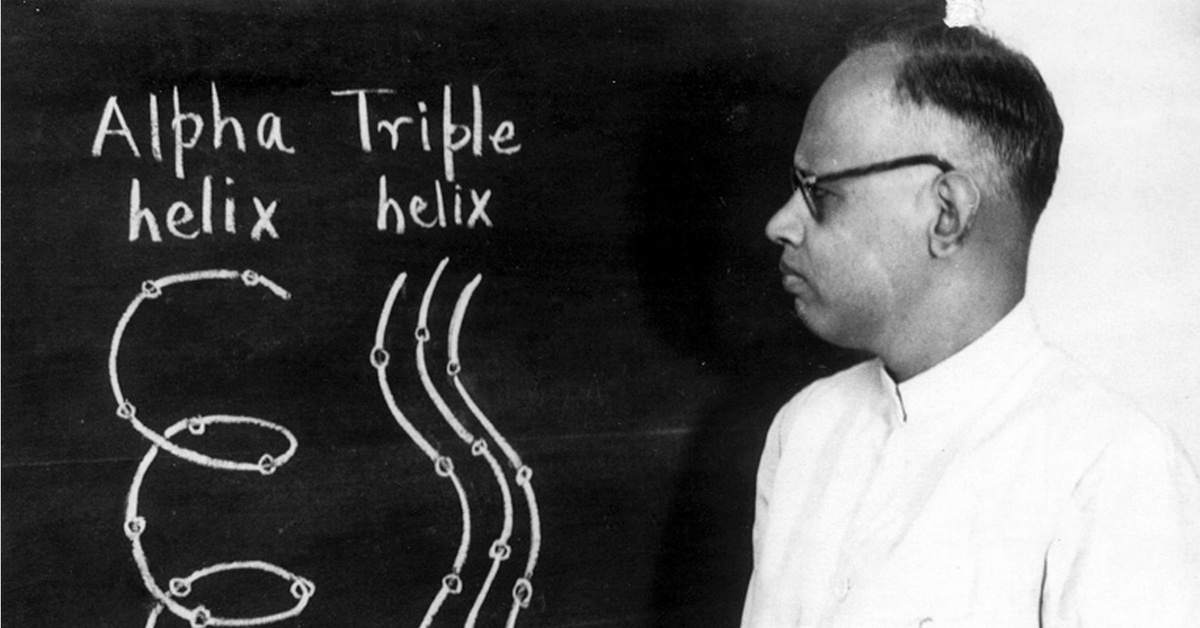 Very few know that it wasn’t Linus Pauling or Francis Crick but an Indian scientist from Madras who first discovered the structure of collagen, a type of protein. This remarkable discovery was made by Gopalasamudram Narayana Ramachandran, or simply GNR, in India in the early 1950s. Here’s his fascinating story.

Sir James Watson and Francis Crick created history in 1953 by discovering the double helical structure of DNA, the building blocks of life made up of proteins. The proteins are made of repeating units of amino acids, monomers, which are held together with a peptide bond. These bonds together form a long peptide chain. This structure of molecules is very important, as any incorrect folding of peptide chains would lead to genetic diseases.

The understanding of proteins in the human body started in the early 1950s, when scientists were researching the structure of various bio-molecules. In fact, it was an Indian scientist – G.N. Ramachandran, aka GNR – who first discovered the structure of collagen, the most abundant protein found in all animals, including humans, and used in biochemical engineering today.

Born on October 8, 1922 to a simple family in a small town near Cochin, young GNR was greatly influenced by his father Narayana Iyer, a Professor of Mathematics at a local college. Often called called G.N.R. or Ram by his friends and associates, G.N. Ramachandran’s name stood for Gopalasamudram, his native town (‘G’), and Narayana Iyer, his father’s name (‘N’).

GNR graduated with a B.Sc (Honors) in Physics from the University of Madras as a top-ranking student in 1942. He joined the Indian Institute of Science (IISC), Bangalore where he met Nobel Laureate and head of the Physics Department, Sir C.V. Raman. Under Raman’s guidance, GNR received his D.Sc degree, which is equivalent to a doctorate degree.

In 1949, he received his PhD from Cambridge University after working for two years in the laboratory directed by Sir Lawrence Bragg, who co-discovered X-Ray diffraction, a technique used to decipher the structures of bio-molecules such as DNA and proteins.

The same year, GNR returned to Bangalore and worked as an Assistant Professor in Physics till 1952, when he began his journey in the field of biochemical research. At 29, GNR became a Professor of Physics at the University of Madras, by Raman’s recommendation. Now, GNR had a lab of his own and wanted to study bio-molecules, but he didn’t know where to begin. That’s when his former colleague from England J D Bernal, a renowned crystallographer, paid him a visit in Madras. Bernal told GNR about international researchers’ struggles to find the structure of collagen. This inspired GNR to find the structure of collagen.

Now, to begin his study, GNR needed to source collagen. Good-quality pictures of collagen were very important in his research, but the shark fin-collagen which was available in the Biochemistry Department on-campus did not give the desired results.

Knowing that leather is largely made up of collagen, GNR decided to use it. He visited the Central Leather Research Institute (CLRI), which was close to Madras University, for this. While beef Achilles tendon was easily available in India, the Kangaroo tail tendon would get the best diffraction images, in theory. Thus, a helpful deputy director of CLRI got the kangaroo collagen from Australia specially for GNR.

During those days, the only available information on fibrous protein was that one-third of its total amino acid content was glycine. Using this fact, and the pictures of the collagen which GNR took, he ideated a triple helix structure for collagen, stacked in a hexagonal form. GNR and his research group’s findings were published in the renowned journal Nature in August 7, 1954.

GNR’s findings were a big discovery, which soon started being known as the work of the “Madras group” by international molecular biologists, while his model was referred to as the Madras triple helix.

In 1955, GNR modified his first prototype and came up with the “coiled-coil” collagen structure. He published this refined study in the September 1955 issue of Nature. A few weeks later, Sir Francis Crick, co-discoverer of the DNA structure, published an article in the November 1955 issue of Nature in which he acknowledged GNR’s work but put forward his own theory with minor modifications of GNR’s work.

Soon, other scientists also came up with their ideas for deciphering the structure of collagen, and GNR’s initial contribution did not get its due credit. But GNR didn’t quit. He continued to work on finding the principles on which various polypeptide chains could take the structure of a protein.

GNR’s undying quest for the study of collagen led to the historical Ramachandran Plot in 1963. The Plot is as important as the Raman Effect, Heisenberg’s Uncertainty Principle, or Einstein’s Theory of Relativity in science. In fact, researchers use the Ramachandran Plot to study protein structures even today.

During his lifetime, GNR also penned several books, and held scientific conferences in Madras for top-notch international scientists. In the 1980s, GNR’s extraordinary mind started showing symptoms of Parkinson’s disease, and his health started deteriorating. An ailing GNR retired in 1989, and died due to cardiac arrest in April, 2001. GNR’s historical discovery of the structure of collagen started with a simple request for Kangaroo tail tendon at CLRI. Hence, the Institute named its auditorium the Triple Helix in 2001 as a mark of honour to him.