Going Grocery Shopping? These Organic Thelas Ensure That Farmers Get Best Prices Too! 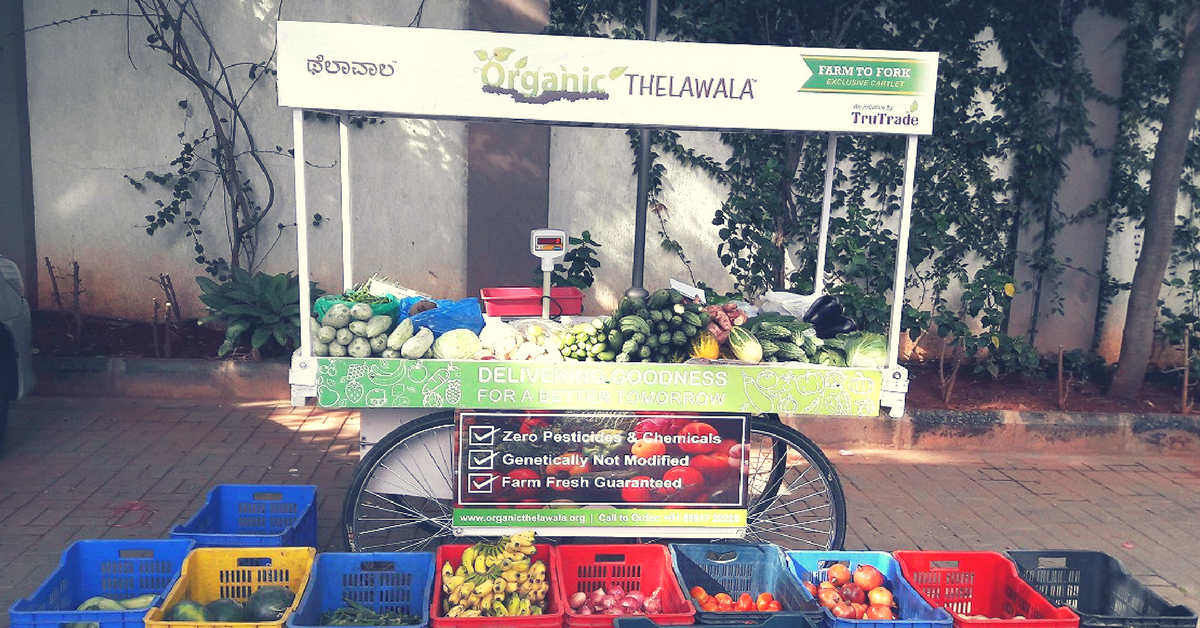 The brainchild of Naveen Seri, TruTrade and Organic Thelawala are the brain child of Naveen Seri. These initiatives work for the financial independence of the farmers and push pushcart vendors. They and promoting promote organic and sustainable farming practices, and micro entrepreneurship at the same time.

How would you like to walk down the road from your house to your thelawala and buy fresh produce that is chemical free and reasonably priced? Or how about a transparent system that lets you know the farmer who’s toiled to grow your food and even exactly how much of the price the grower actually gets? Naveen Seri’s TruTrade and Organic Thelawala wants you to get a taste of this ideal world.

India is an agrarian country with around 70% of its people depending directly or indirectly on agriculture. However, the well-being of farmers that provide our food often take a back seat. Though the prices of produce increase by the day, farmers often struggle to make ends meet and farmer suicides are on the rise.

While leading the worldwide Strategy, Analytics and Business Planning team at Technology Services,Hewlett Packard, Naveen Seri read a report by the National Crime Records Bureau. The report stated that nearly 32 farmers commit suicide every day in India, with bankruptcy being among the major causes.For Naveen, a former software engineer in the IT sector for over 15 years, it was these statistics that spurred him to start his initiative.

He left his lucrative job in 2012 and decided to find the reason behind the bankruptcy of farmers and to do something about it.

For the next year and a half, Naveen visited numerous farmers in Telangana, Andhra Pradesh, Karnataka and Madhya Pradesh to understand their problems better. He found out that in old days when agriculture was flourishing in India, a farmer would never buy any new seeds, fertilizers or pesticides, hence the cost of input was almost nil.Today, instead of saving the best seeds, the farmers were buying new seeds every year. More than half of their income was spent on buying chemical fertilizers and pesticides. This was also making the soil barren overtime. Thus the input cost increased with each passing year.

Naveen decided to tackle this area and came up with the idea of TruTrade.

“I did not want to be another broker working for profit and decided that TruTrade will be a social enterprise without any profit margin,” says Naveen.

The first step was to convince the farmers to switch to organic to ensure quality and healthy food for the consumers and to help develop a chemical-free environment.

TruTrade’s field officers train the farmers and live near them to guide them in the organic process. The complete turn to organic is usually a three-year process and TruTrade makes sure to support the farmers until they are fully converted. The farmers are trained in soil nutrient management (composting, jeevamrutha, panchagavyaetc), seed selection, crop management, pest and disease management etc. The team also helps them get an organic farming certification.

“With the help of organic certification, we get to sell our produce at a better rate and TruTrade had deployed their field officers who helped me to get the certification with ease,” says Mallappa B Ramani, a farmer from Gadag.

Today, nearly 13,000 farmers are associated with TruTrade from the states of Andhra Pradesh, Telangana, Tamil Nadu, Madhya Pradesh and Karnataka.These farmers are paid 70% of the total cost of the produce,ensuring them a better livelihood.

The most unique feature of TruTrade is the transparency meter printed on each of their products. The transparency meter provides visibility of the price paid to the farmer by TruTrade. The breakup of the additional costs incurred right from processing, packaging to the TruTrade team’s salary is printed. The packages also have a QR code, which can be scanned to view the name, village, taluka, district and phone number of the farmer who has grown the produce. This way, one can always talk to or meet the farmer who has grown the food.

“We pay 20% more than the production cost or the market rate, whichever is higher, to the farmer, then add the other expenses incurred in getting the product to the consumer. The cost of our products is decided in this way, hence they are much cheaper than the market rate of organic products and the farmer is also never at loss,” says Naveen.

The next step was marketing and according to Naveen, he never wanted to spend a huge part of the income into advertisement and put the additional burden on the consumer. Thus TruTrade partnered with the retail store Greenz and now you can find their products in all the 50 outlets of Greenz in Hyderabad.

The response at these outlets was outstanding, however, the customers would always ask for organic fruits and vegetables whenever they would buy grains with a similar transparency feature that TruTrade was providing.

While Naveen was wondering how he could get space to sell organic vegetables and fruits, his mother told him during a conversation that she prefers buying fruits and vegetables from the push cart vendors rather than the retail stores as she finds them fresh and cheaper. This was the answer to Naveen’s worries.

He then decided to launch his new idea, the Organic Thelawala (push cart vendor for organic fruits and vegetables) in Bengaluru.

While the team started designing the thela, Naveen would go to the mandi and look out for push cart vendors.

Visiting the mandi gave him another strong reason to be firm on his decision to launch the organic push cart. He saw the miserable life that the push cart vendors were living. From negotiating the rent of the push cart to going to the mandi to buy vegetables as early as 3 AM, these push cart vendors literally had no work-life balance. You can read Naveen’s experience at K.R. market here.

The push cart vendors-turned-Organic Thelawalas now get their veggies and fruits delivered at their doorstep at 7 in the morning.

They do not have to pay the rent or buy the vegetables. The rate chart is given by the TruTrade team. At the end of the day, the Thelawala is paid for the amount of veggies sold. The rest of the vegetables and fruits, which are still fresh, are donated to the nearby orphanages.

“Organic Thelawala has helped me earn better than before without having to struggle or sacrifice my family time. Now I do not have to wake up early in the morning or go in search of fruits and vegetables. TruTrade does all the procuring for me while I have to only sell them to my customers,”says Srinivas, an Organic Thelawala.

One can contact TruTrade if they wish to have an Organic Thelawala near their vicinity. The fruits and veggies can also be home-delivered at just an extra cost of Rs. 30 anywhere in Bengaluru.

“I would request each and every Indian to join hands with us to change the entire system, which is exploiting the farmers. Please connect with the farmer who strives so hard to grow your food and never ever let a farmer think of taking his/her life,” concludes Naveen.

You can connect to TruTrade here. Browse the daily rates of fruits and vegetables at the organic thela here. You can also send an email at order@organicthelawala.org or call at+91 88617 22228/+91 96325 92686 to order your veggies and fruits. You can also help TruTrade to spread across India by taking up a franchisee at your city.