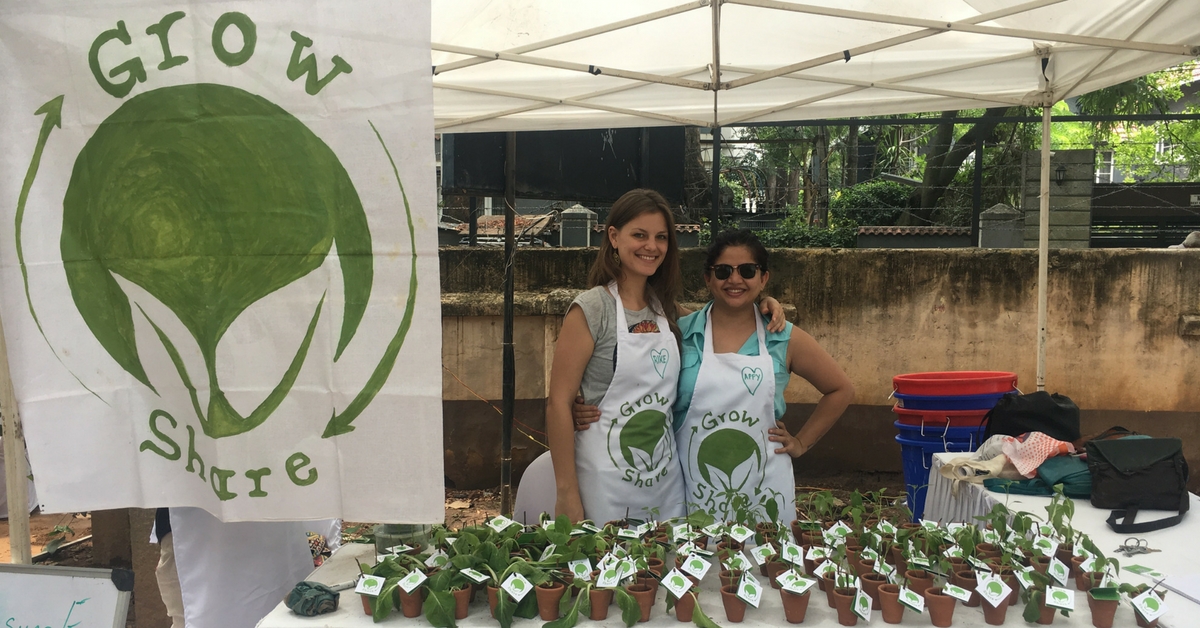 Friederike and Apoorva at the Open House

Developed in Bengaluru, the Grow2Share app not only answers gardening and farming queries, but also motivates a growing community of urban gardeners.

We hear daily stories of vegetables and fruits being mercilessly subjected to pesticides and fertilisers, causing more harm to the health of consumers than any good.

You might have even contemplated learning the basics of gardening and growing your own veggies, sans chemical or toxic content making its way into your gastric palate.

Living in urban spaces isn’t often accompanied by the luxuries of time and space. These are both precious commodities and not everyone can afford to invest in them. Sometimes, one has the advantage of both but no idea about farming or the necessary tools and resources.

Now there’s an answer to every budding urban farmer’s woes.

Grow2Share is an initiative that not only answers gardening and farming queries, but also motivates a growing community of urban gardeners. All this, for free!

Based in Bengaluru, the Grow2Share app has been co-founded by Mayank Agarwal, Apoorva Jaiswal and Friederike Fokuhl towards the end of 2016. Using interactive tools and resources, the trio aim to bring together first-time and seasoned gardeners with service providers on a single platform.

“Our primary and immediate goal is to encourage people to grow their own healthy and pesticide-free vegetables, and share their produce with others. But in a long run, we want to create green spaces in the city and be completely sustainable as a community,” says Apoorva.

You may also like: A Group of Punekars Is Using WhatsApp to Teach Others How to Turn Food Waste Into Compost

Apart from giving a step-by-step guide on how to grow and harvest fruits and vegetables, the app also shares information on organic waste composting and its localisation.

“The very kitchen waste that go straight into the drains could be smartly used as manure. You probably won’t even need to buy any additional manure from stores,” Apoorva mentions.

The app also links users with different vendors who supply naturally grown seeds, soil and manure. And like any social networking platform, you can chat with fellow gardeners, share your progress pictures, get credits for what you grow, and get tipped with good healthy habits.

“We encourage subscribers to share their ‘handiwork’ with their friends. More like a community effort, more people will be inspired to take up the green way and as an effort, a better lifestyle,” Apoorva adds.

Starting with a page on Facebook, the team has organised various events in the city to raise awareness.

Most recently they put up a stall at the Open House Edition II, a popup event in Bengaluru, for the soft launch of Grow2Share. A variety of saplings were given away to visitors along with a download link to the app.

For other interested users, the app has a few days to go before it can be downloaded. Apoorva says, “We have planned for a launch on both Android and iOS platforms on June 5, which is the World Environment Day.”

You may also like: What Happens When Trees Fall Sick? In Delhi, an Ambulance Comes to Their Rescue

By encouraging more home-grown veggies and fruits, free of pesticides, Grow2Share intends to usher in another ‘green’ revolution, this time in a natural way.

“When you start growing plants at home, try involving the children as well. Like gifting them saplings on birthdays. Not only does it inculcate a great value, but more than that they become more observant and environment sensitive,” Apoorva says.

Bringing together the best of both worlds, Grow2Share is a unique initiative for urban dwellers, leading them to a world of healthy, home-grown farming and ultimately a more wholesome environment.

To get in touch with the team at Grow2Share, click here.