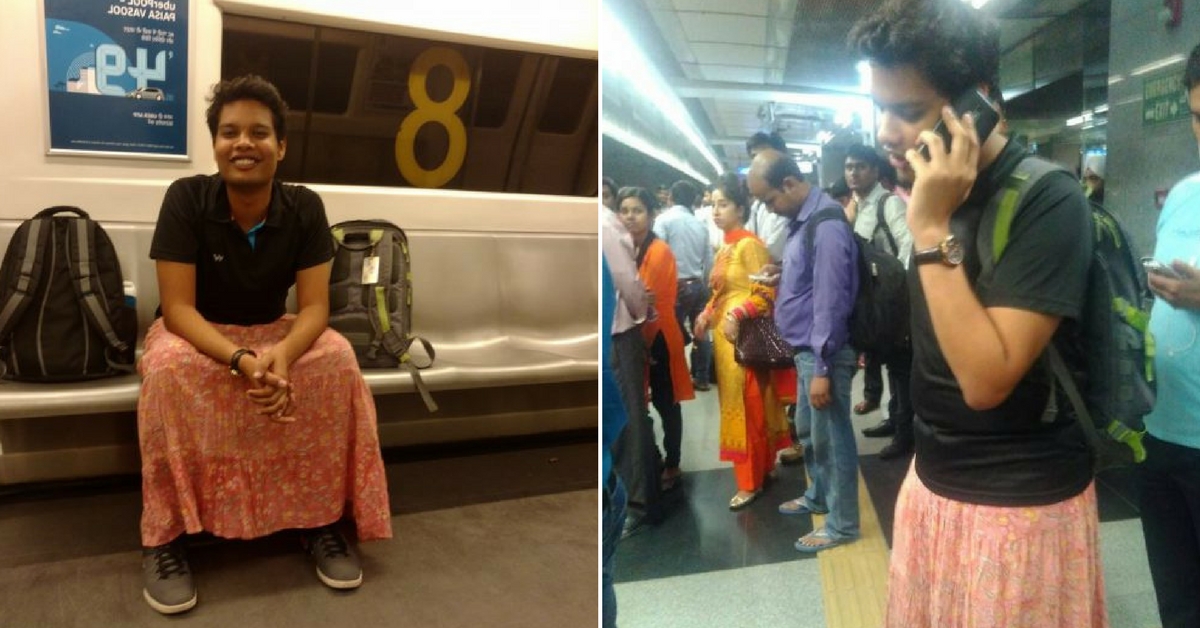 The debate about gender and sexual orientation is a particularly important one in today’s society, as people increasingly decide to seek freedom of expression. A young man narrates his own experience of breaking gender stereotypes in the heart of Delhi – the Delhi Metro.

Let me tell you a story. It all started when my friend Simran and I were looking at long skirts being sold by a roadside vendor.

I remember during my Pravah ICS journey, my Active Citizenship Day (ACD) was themed on sexual orientation. Mark* and I had worn ghagra choli to check the feelings of our fellow team members. We had borrowed it from the host family. Santoshji, our host, bhabhi, dadi, and the kids laughed and giggled all the way. They clicked photos with us, and it was totally okay with them.

When we entered the Manthan hall, the volunteers had a few laughs and couldn’t stop smiling. They had seen us in kurta pajama all the time, but this was something different. It was easy for me that time, as I was doing it in Manthan’s campus where everyone knew that I was cross-dressing on purpose.

I did not have a fear of judgement at that time.

“What could happen if I wear it in public? “ I thought. All my fears could be out in the open, which were absent when I cross-dressed for the first time in my Pravah ICS placement. I did not have to live there for a lot longer, but here I had to see the same people maybe every day. This, my friends, is the place where I have lived for the past five years and will continue to.

“Hypocrite you are,” she said. I had always claimed to be a feminist. 15 days ago, a person had cross-dressed, and was constantly laughed at and judged by the people. I had claimed to empathize with the person, but how could I, till myself experienced what they went through?

This reflection pinched me so deeply that I decided to wear a beautiful pink long skirt the next day.

In a parallel discussion, we also talked about different genders and sexes. Did you know Facebook has recognized 58 other genders, apart from “man” and “woman”? I did not know the difference between sex and gender. In layman’s terms, while sex is about “male”, “female” and the other sexes, gender is about “man”, “woman”, and the other genders, where the famous genders are polar in the spectrum.

Why do only chromosomes and hormones decide the gender of a person, without even considering what the person wants to be identified as?

How can a person like me, who is heterosexual and male, decide the gender of the other person?

Staring and head-turning was expected. I expected getting scanned from top to bottom. Being laughed and pointed at by people was expected. What wasn’t expected was me being confident and keeping a smiling face throughout. There I stood, in the middle of Connaught Place, challenging stereotypes. I went to showrooms to check out stuff, and what-not. All eyes were on me, judging me and telling me that there was something they had not seen before, but I didn’t care.

Amidst the laughter and smiles, there were two people who complimented me on how beautiful I looked in that pink long skirt. They commended how daring and gutsy I had been by wearing something which challenges mindsets. Honestly, I didn’t feel that I had put in extra guts to do it. I didn’t make any eye contact. I tried to be as natural as possible, the way I am on my usual days. But the constant thought of what I was wearing was always there. The constant thought of not maintaining eye contact with anyone was always there.

It would have taken me guts to look into the eyes of people who were scanning me, because then I would have to confront them without uttering anything. I couldn’t do it.

It ended with a question, “I may have confused people by being myself, reflecting male gestures while wearing the stereotypical clothes of the other gender. But why were my gestures considered to be a man’s?”

As soon as I took off my skirt, all the eye-scanning stopped. I could now genuinely empathize with the females who walked along with me – after being through the phase when one is constantly conscious about themselves – as we walked out of the metro station.

I did not intend to do a social experiment. My expectations were not to learn anything from it. I did not intend to challenge stereotypes in society, but I did. I wanted to prove that I am not a hypocrite. Not intending to grab attention, I didn’t even make eye contact with anyone. However, it was “not following the stereotype” that brought attention. I could have never guessed that it would give my mind a new dimension to a perspective I had only barely touched upon before that day.

About the author: Atul Khera was a Team Leader with Pravah ICS for two batches, July–October 2016 and October 2016–January 2017, and was placed with partner organisation Manthan in district Ajmer.

Adapted from a blog originally published online. To venture on the exciting volunteering journey of Pravah ICS yourself, fill out the application form here.