TBI Blogs: This Gandhian Couple Has Provided Medical Help to Maharashtra’s Tribals for over 30 Years Through their organisation SEARCH, Dr. Rani Abhay Bang and her husband Dr. Abhay Bang have brought hope, love, and social upliftment to thousands of vulnerable tribal communities in Maharashtra.

Dr. Rani Abhay Bang and her husband, Dr. Abhay Bang, make a wonderful and inseparable couple, who have dedicated themselves completely to the social and educational upliftment of the lowest of the low, namely, the tribal people of Gadchiroli district in Maharashtra, their ‘Karmabhumi’, by providing effective medical and public health services to them.

On her return to India from the USA, Rani and her husband set up a grassroots health organization SEARCH (Society for Education, Action & Research in Community Health) in 1986. This institution, after surveying the health conditions among the people in the villages of Gadchiroli, came up with the startling discovery that 92 % of women in these villages had gynaecological disorders, a good part STD-related. Another study in the same 58 villages revealed that pneumonia was a major child killer.

Rani and her husband began working out solutions with the villagers’ involvement in 1993, when they set up Shodh-gram, 17 kms. from Gadchiroli, on a 13-acre plot. It is modelled on a typical Gond tribal village, with a tribal-friendly hospital complete with a small temple for a tribal deity. The hut-like wards, the outpatient department, the canteen, all have the tribal touch.

The ambiance was created to make the tribals feel at home. The campus has a training centre, a research centre, an alcohol de-addiction centre, a pharmacy, quarters for the staff and a house for the Bangs, a prayer-cum-meeting hall, a kitchen-cum-dining hall, and quarters for visitors.

Every evening, before dinner, the people of Shodh-gram gather for a prayer meeting. Rani and Abhay give the lead with a rendering of Itani shakti hame dena data to be picked up by the others. The entire movement initiated by this couple is a fulfillment of the concept of Mahatma Gandhi’s ideal of evolutionary revolution. Gandhi’s influence is writ on every aspect of Shodh-gram.

The entire basis of research in Shodh-gram is participatory in character, and the objective is to search for healthcare for the rural and tribal populations of India. Many rural Dais, in 60 villages, have become barefoot doctors to help and treat thousands of uncared-for rural women. Rani influenced them with her humane qualities, her very transparent heart, and her effusive warmth.

The locals responded eagerly to the overtures from the doctors-turned-social healers, and this unity of purpose was soon seen in the epoch-making campaign against alcoholism. The couple soon formed a Darumukti Sanghatna, and organised an ISO-village conference attended by 3,000 delegates, mostly women, who turned into enforcers of the “People’s Prohibition”.

Rani and her husband won the gratitude of thousands of women and children free from the physical and mental abuse of alcoholics. 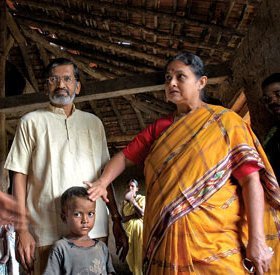 Rani and Abhay have conducted pioneering research in high prevalence of gynaecological problems in rural women. Other research areas include sexually transmitted diseases and AIDS control, child mortality, and acute respiratory infections in children. SEARCH also leads global research in newborn healthcare for rural areas, tribal health, alcohol and alcoholism, and adolescent sexual health. The work done by SEARCH has reduced the infant mortality rate in this tribal area to 12-30 % per 1,000. Organisations world-wide have accepted the new approach by SEARCH as an effective way to reduce child mortality.

SEARCH has provided light in an area scarce in doctors. It has become a beacon of hope and help for thousands of people from the most vulnerable sections of society.

SEARCH has received the MacArthur Foundation International Award for creative and social work. The Government of Maharashtra earlier honoured it with the Maharashtra Bhushan in 2003, for its work among the tribals. In 1996, it received the Seshadri Gold Medal for outstanding contribution to the field of community medicine in India. In 2005, TIME magazine honoured the couple and included them in its list of 18 Global Health Heroes.

Rani and Abhay strive to model themselves on Albert Einstein’s ideal. “A human being belongs to a whole we call the ‘Universe’, with limited time and space. He experiences himself…as something separated from the rest, a kind of optical delusion of his consciousness. This delusion is a kind of prison…restricting us to our personal desires, and affection for few persons nearest us. Our task must be to free ourselves from this prison…to embrace all living creatures, and the whole of nature.”

In the year 2006, Dr. Rani Abhay Bang received the Jamnalal Bajaj Award for Uplift and Welfare of Women and Children.