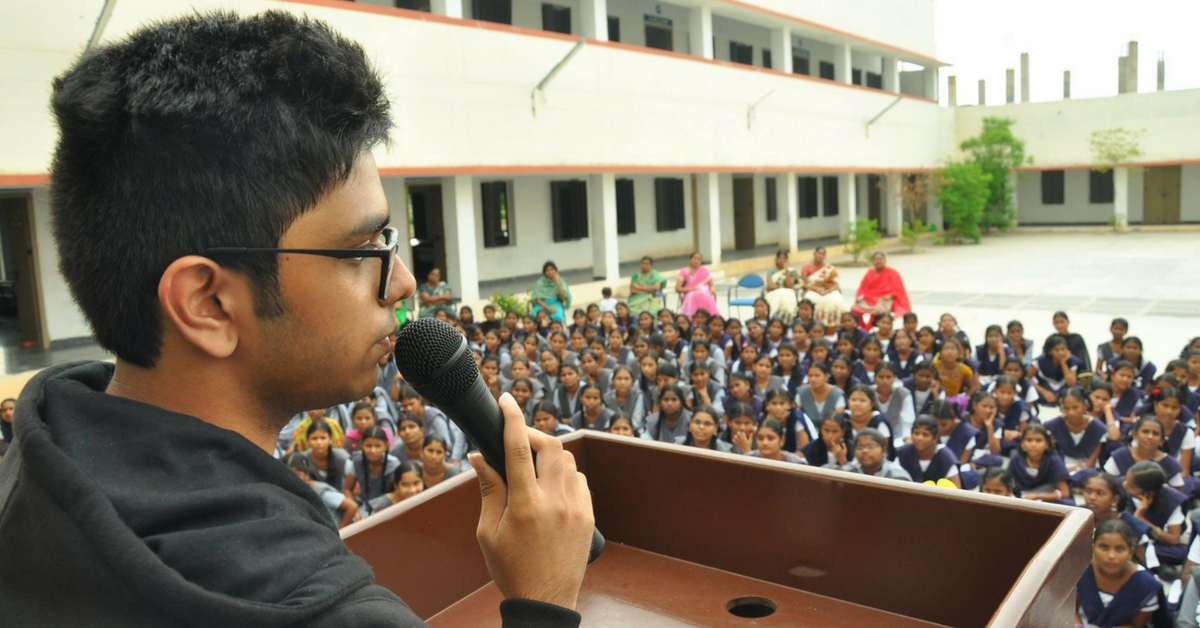 Fuelled by the protests following the Nirbhaya rape case, 15-year-old Siddharth Mandala came up with an invention to stop further incidents of rape – the ElectroShoe.

I was 12 years old when the Delhi rape incident took place. I remember my mom joining the march for the Nirbhaya (meaning fearless) campaign with 500 people for several weeks to support the victim and her family. Curious about the protest, I asked my mom if I could come along one day.

Soon, I started attending the protests every weekend. The more often I went, the more enraged I felt. What if the victim had been my mother? What if she had been one of my friends? On most days, I would stay there for seven straight hours on just three slices of bread, my hunger satiated by my purpose of being there.

As time went by, I realised that it is not rape that hurt the victims most, but rather society which looks down upon them. They are looked upon with pity. They are told that there is no coming back from the incident.

For three months I protested, waiting for justice for Nirbhaya and thousands of other nameless victims. Frustrated that the judicial system moved at a snail’s pace, at the age of 15, I decided to do something myself.

I used my own knowledge and the Internet, and with my friend Abhishek’s help, I made something that could stop people becoming victims of rape.

I invented a patent-pending device called ElectroShoe. It can electrocute the perpetrator instantly by inflicting 0.1 Ampere of electricity, while sending an alert for assistance to cops and family members. To accomplish this, I created a unique circuit board that uses footsteps to charge itself with the help of a concept called the “piezoelectric effect” which I learned in my physics class. The more the user walks, the more energy is generated and stored in a rechargeable battery.

You might also like: This Corporate Professional Quit his Job to Ensure that Nobody in his City Goes Hungry or Homeless

The invention process was an uphill climb as I ran into countless problems. With the help of many great mentors from LinkedIn and social media, I taught myself programming in various languages. I would spam them every time my code didn’t work. Fed up, some of them even stopped replying. My prototype failed 17 times. While experimenting, I faced electrocution twice, and my friend Abhishek even developed a nosebleed.

But whenever I felt like giving up, I remembered my favourite inventor Thomas Edison’s words, “I didn’t fail 1,000 times. The light-bulb was an invention with 1,000 steps.”

It took me two years to build a working prototype. In the end, the hard work paid off and I was able to create a working prototype of the shoe. I felt like a superhero. It felt amazing to know that if this product could reach the people, I might be able to save at least a few lives.

Because of my efforts, the Education Minister and Deputy Chief Minister of Telangana, Kadiyam Srihari, awarded me with a letter of appreciation.

While working on this product, I also became an “activist”, influenced by my mother. I started an NGO called Cognizance Welfare Initiative (CWI) to spread awareness about rape. I also taught basic coding to government school children, and helped them build their own projects dealing with micro-controllers. My team and I also filled over 30 potholes in and around Hyderabad with the renowned social worker Gangadhar Tilak, popularly known as “pothole man”. Because of our efforts, we were covered by the BBC.

We donated bags, books, pens and others items of stationery to over 500 students for their board examinations. CWI started with five people, but after the BBC article, we ended up with more than 40 volunteers.

You might also like: This Engineering Student Has Made a Portable Water Purifier. And It Costs Just ₹ 20

I was eventually approached by USA-based organisation Empower & Excel to be a part of their Indian Youth Wing as a team leader. They planned to expand in India and were in the process of adopting a school the Khanigiri village. Empower & Excel asked me to lead their tasks from helping children build solid communication skills and improve their literature knowledge to building eco-friendly Ganeshas and conduct book drives.

About the author: Siddharth Mandala is an inventor and entrepreneur, and the Founder of Cognizance Welfare Initiative. You can reach him by email.

Find out how you can contribute on Cognizance Welfare Initiative’s website.