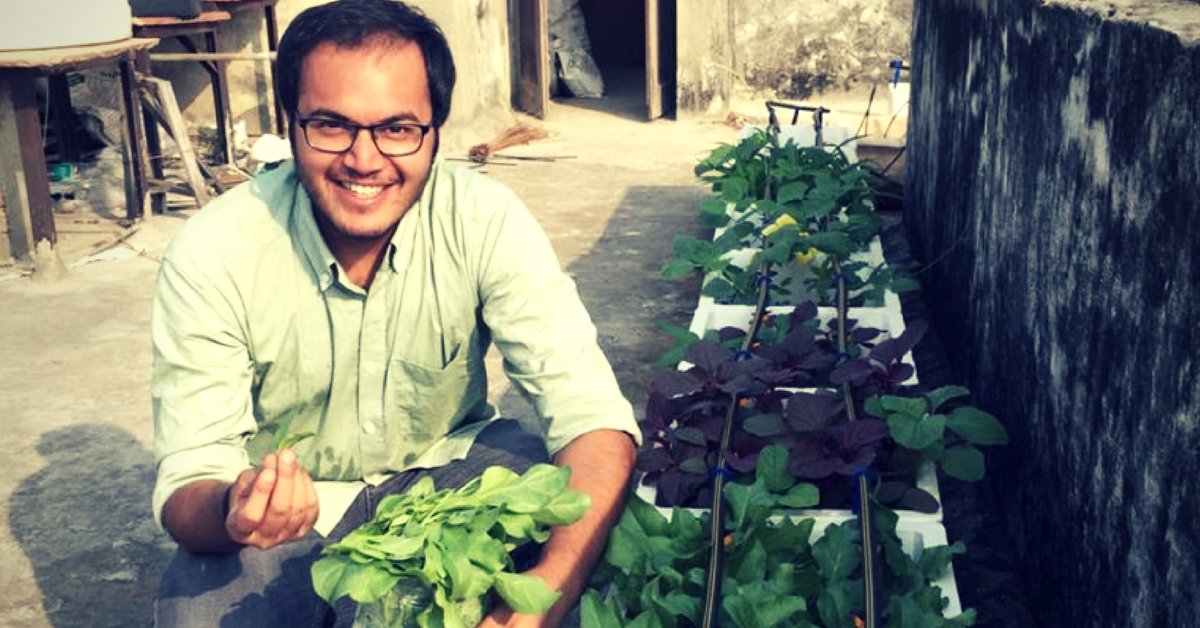 Saahil worked as a sustainability researcher at TERI while Kaustubh worked on the design of Greenfield smart cities under the Government of India’s Delhi Mumbai Industrial Corridor project.

Friends from the IIT Kharagpur, Saahil Parekh and Kaustubh Khare never imagined that they would helm a startup. Post graduation, both arrived in Delhi—Saahil worked as a sustainability researcher at TERI while Kaustubh joined the Young India Fellowship, following which he was selected as an IIC fellow by the University of Chicago to work as an urban designer. During his fellowship, he worked on the design of Greenfield smart cities under the Government of India’s Delhi Mumbai Industrial Corridor project.

The duo’s experience of working in this sector marked the beginning of Khetify.

In their own experience, both Kaustubh and Saahil came to realise that unless cities take control of their food systems, sustainability could not be achieved.

“I had to visit these landfill sites in Delhi, Chandigarh, Dharamshala, etc, while working for the industrial corridor project. I was shocked to see vegetables like brinjal, tomato and coriander being grown in these landfills, which were filled with heavy metals and all the industrial toxic wastes. All this, of course, goes into this soil and we are eating the same vegetables grown there. I came back and told Saahil that all that we are eating is toxic and we are not going to buy at least brinjal, tomato and coriander from the mandi. Thus we started experimenting to grow these vegetables on the 15×20 ft rooftop of our rented apartment,” says Kaustubh.

You may also like – Middlemen out, Earnings In: Farmer Markets in Maharashtra Now Make ₹5 Crore per Week!

Kaustubh and Saahil experimented with soil, compost and pesticides for almost 1.5 years. But when they shared their experiences with others, they were told that such vegetables are suitable for in cold regions and impossible to grow in Delhi’s scorching summers. Finally in June 2016, the duo harvested around 36 kg of brinjal, tomato and coriander from their rooftop. This made them confident in them that, with the right twist in process, vegetables can be grown in any conditions.

Meanwhile, Kaustubh was also invited as an urban designer, among 20 others from around the world, to work on a project in the outskirts of Paris. Here, he learnt that the cities were completely sustainable in terms of agriculture, unlike in India where the government projected cities for industrialization and villages for agriculture. Saahil also concluded, during his stint with TERI that basic agriculture is a must for cities in order to make a balance.

In 2016, they left their respective jobs to start Khetify.

Claiming that 16,000 sq km worth of rooftop space is being wasted in urban areas, the startup aims to promote the use of these unproductive spaces in developing small rooftop farms.

Explaining the startup’s motto ‘Desh Ka Culture, Agriculture’, Kaustubh says, “We believe that urban India has been disconnected with farms, farmers and their agrarian roots. Unless cities take control of their food systems, true sustainability cannot be achieved”.

Modular: One size does not fit all, so Khetify’s urban farms come in modular farm boxes to fit and adapt to a terrace, roof or patio—wherever you wish to farm.

Water-efficient: A state-of-the-art drip irrigation system helps save at least 300 lt water monthly, compared to conventional systems. There is also no risk of watering too much, or too little.

Tech-driven: The team is developing on an automated watering system, to be ready in a few months. Using the Internet of Things (IOT) concept, the farm boxes can be watered by just sending an SMS. No more worrying about thirsty plants while you are away.

Compost-based: The farms come with a unique growing medium to which one can add compost, a great way to recycle organic household waste.

Maintenance: Khetify hires farmers, who migrated to the city in search of other work, to undertake monthly maintenance. These experienced farmers keep the farms in order, from checking ph levels to managing crop health.

According to team Khetify, items like spinach and lettuce should be grown in the consumer’s location as they lose nutritional value faster.

“Our vegetables travel at least 1,500 kilometres before they reach our plate. On the way, so many chemicals are pumped into them to extend their shelf-life. And we have no way of knowing where our vegetables were grown and what chemicals they contain,” says the duo.

Non- perishable items like lentils, grains and vegetables like onion or potato, which have longer shelf-life, can be grown in villages and transported to cities. Urban farming help cities become sustainable, citizens get nutritious food and farmers are incentivised to grow crops which profit them in the long run.

For instance, an onion’s shelf life is 8-9 months, without cold storage. Such items can be stocked in micro-storage facilities jointly created by a group of farmers. They can sell some of the produce to recover the investment and rest can be stored to be sold in the off season to get a better price.

“If you go just two generation back, 70% of Indians had agricultural background. We are a country of farmers, however with improving urbanisation, we feel that agriculture is the work of people who are not educated and there is no future in it. We are trying  to make it as easy as possible and also trying to fill the knowledge gap by projecting farming as a cool thing to do,” says Kaustubh.

Need of the hour The team also holds agriculture workshops in schools and societies and it saddens them to see that most children don’t even know if a potato is grown under or over the ground. The team aims to make children aware of the food they eat, to identify plants and seeds and spreads awareness about nutrition.

“Our children know about each and everything outside but they have no clue about the things they are and are going to put inside their body – that is the food that we eat. We feel that should be the basic knowledge each and everyone must have for a healthy society,” says team Khetify.